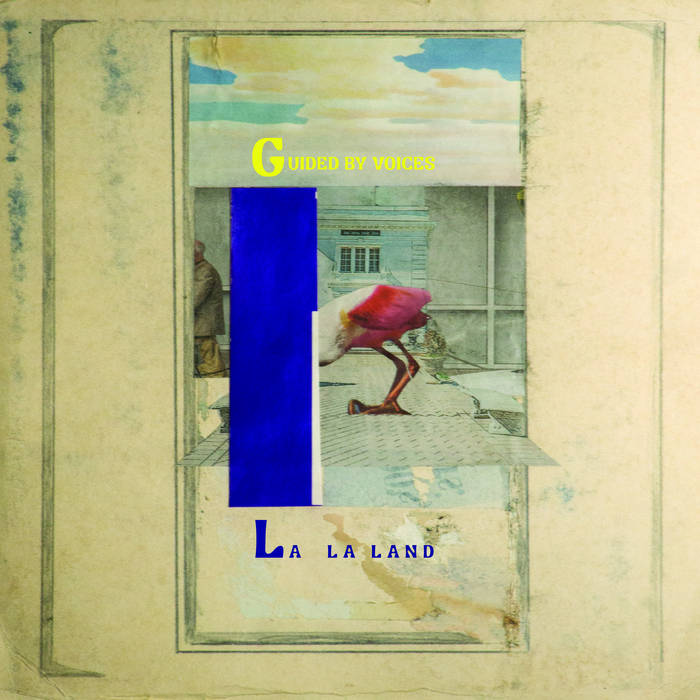 After releasing two excellent albums last year (Crystal Nuns Cathedral and Tremblers and Goggles By Rank), Guided By Voices are getting 2023 started early with La La Land, their 37th album (depending on how you count). If you’ve been keeping up with the band the last few years then you probably know what to expect with this new set of eleven songs: crunchy guitars, punchy rhythms, catchy hooks, and abstract lyrics are here in abundance. But one of the more surprising things about La La Land is how diverse the record is, with Robert Pollard pulling inspiration from his numerous musical influences along with some of his own side projects.

The way the record ricochets from track to track can be a little disorienting at first, but Pollard’s voice functions as a through-line that holds it all together. The band’s more recent albums have featured notably strong vocals, but La La Land features some of his strongest singing in recent memory. More dynamic tracks like the jangle-pop of “Ballroom Etiquette” provide a sympathetic backdrop for the album’s frequent hooks, but energetic rockers like “Face Eraser” also feature some great vocal performances.

La La Land features plenty of the band’s trademark power-pop, but the musical detours prove to be just as rewarding. The haunting “Queen of Spaces” and moody “Wild Kingdom” recall the quieter moments of Pollard’s long-running Circus Devils side project, creating an atmosphere that’s both evocative and a little unsettling. Elsewhere the jaunty “Cousin Jackie” brings together an album’s-worth of ideas and crams them into a three-minute psych-pop confection that sounds like something Paul McCartney might have come up with circa 1969. “Caution Song,” meanwhile, combines a dreamy melody with psychedelic guitars and shifting time signatures to create one of the album’s best hidden gems.

La La Land’s eclectic combination of styles could have created a scattered mess of an album, but when you’ve got a master sequencer like Pollard at the helm the result is a surprisingly cohesive and adventurous listen. Each track has its own feel, but they slot seamlessly next to one another in a way that seems totally natural. The record just works, and manages to combine the best attributes of the last few records without simply retreading the same ground. We’ll have to wait and see what else Pollard and Co. have in store for 2023, but La La Land will be hard to beat.