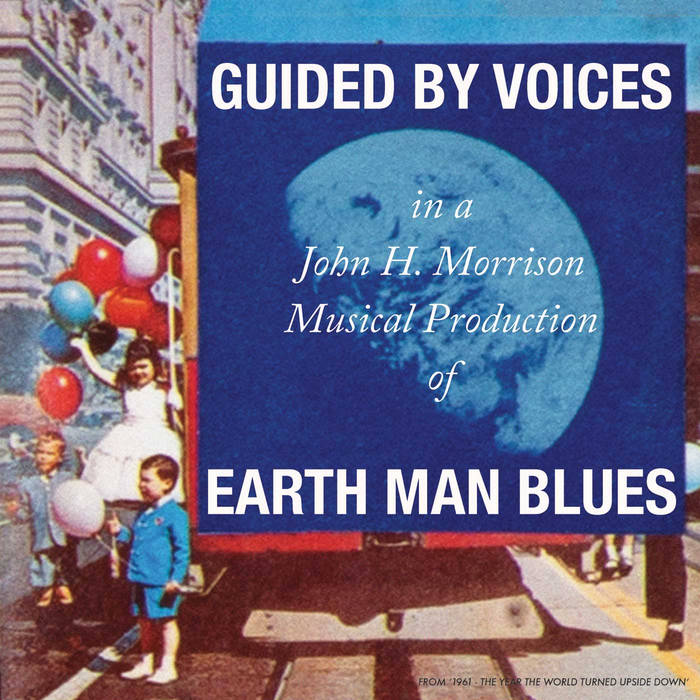 The 33rd Guided By Voices album, Earth Man Blues, is one of the most in sync records that members Pollard, Gillard, Bare Jr., Shue and March have released together. For those not as familiar with the band, you might question how this could be since so many groups have been sidelined from their mates for over a year now. For many groups the pandemic shut down has crippled their normal writing, recording and collaborating but for GBV, it is business as usual! Pollard has a resume full of albums that have been created with contributors in different states and Earth Man Blues is no different.

How we got here really is not as important as Earth Man Blues‘ fantastic transitions, inner song shifts, fearless experimentation, catchy hooks and enough hard driven riffs to keep your best air guitar busy. The album runs wild with a freedom that has not been as evident on some of the more recent GBV albums with this lineup. They have all had a direction and groove but EMB moves quickly and at times comes out of left field with a spectacular injection of Pollard rock. This is the piece that both longtime and newer fans will identify with and say “best record since Alien Lanes.” I would never say that about Earth Man Blues but I would agree it is one of the most enjoyable albums that this lineup has released and contains transitions and inserts that never tire.

There are many highlights on this album but several really stood out to me. 45 seconds into the opening track, “Man Made,” the rocking switches into an orchestra which then ends with a nice notable hook. The low vocal register on “The Disconnected Citizen” will have you taking notice as the more “lighter in the air ballad” finishes off with a fantastic layered harmony. “The Batman Sees The Ball” and “Trust Them Now” both swing for the rock fences and connect while “Sunshine Girl Hello” and “Dirty Kid School” get a bit more experimental that includes a sample, a reprise and the later giving some musical finger snaps like a modern day West Side Story. The new wave stomp in “Ant Repellent” also will have you singing along in no time. The list of these type of “moments” can keep going on as they are the special ingredient that makes Earth Man Blues shine.

There is plenty to like on Earth Man Blues and given the large catalog of GBV it will be a hard album to forget when the next project is released. That is key, because if anyone is like me I love new music. It always has a shine to it but many times the initial hype of an album will fade as the “next” big album of the moment gets a spin. That is where Earth Man Blues succeeds. Its breezy and memorable execution will have you coming back. When you hear it again, there is something new and different about it that brings back that initial excitement. That is a win, as Guided By Voices is locked in and creatively clicking that no matter what they release next (and we know they will), Earth Man Blues will be a standout for years to come.

Artists With Similar Fire: The Who / Spoon / Dinosaur Jr.