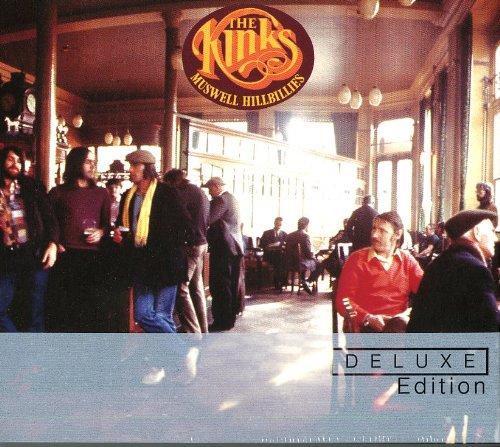 Fire Note Says: Kinks klassic gets loaded up with great bonus material!
Album Review: After “Lola” and its accompanying album (1970’s Lola Versus Powerman and the Moneygoround, Part One,), The Kinks had a good deal of bargaining power: the single took the world by storm and became one of their best-known songs, and while the album wasn’t quite as successful, it performed well enough that the band signed a new record deal on RCA. The Kinks first album for their new label, Muswell Hillbillies, is often cited as one of their strongest LPs, and was also the beginning of their musical shift away from the “Englishness” of their classic era (Something Else, The Village Green Preservation Society, Arthur, etc.) to a more eclectic range of influences. Universal’s new deluxe edition adds a whole second disc worth of bonus material, and while it may not be essential for the casual fan, Kinks konnoisseurs will find plenty to get excited about.
Disc one is the album itself, and it’s a pretty great one. While not as earth-shatteringly brilliant as its critical reputation might suggest, each and every song is more than solid with a few obvious high points sticking out above the rest. The opener “Twentieth Century Man” is definitely one of these—Dave Davies and company lay down a foot-tapping acoustic groove as Ray Davies sings against industrialization and the modern world, coming to the conclusion: “I’m a twentieth century man but I don’t wanna die here.” Most of the songs on