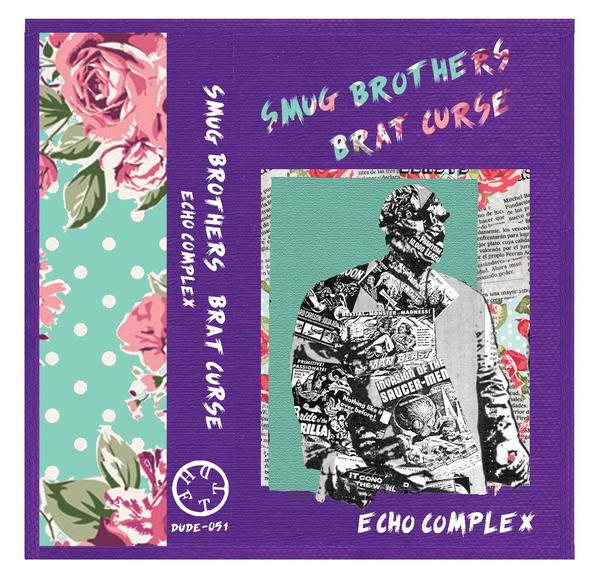 Fire Note Says: A great cassette split from Dayton, Ohio!
Album Review: Dayton natives, Smug Brothers (Brian Baker/Larry Evans/Kyle Melton/Don Thrasher) closed out 2015 with a nifty EP split release with fellow Dayton-based band, Brat Curse. Smug Brothers contribute nine tracks to the album, the same number of tracks they had on Woodpecker Paradise that released earlier last year. However, the tracks are much shorter this time out. Shorter does not mean that the tracks lack substance; fans of Guided by Voices know this all too well. Smug Brothers construct some perfectly concise pop gems on Echo Complex. “A Short Time” kicks things off with a bang. “Razor Thin Races” is just chock-full of hooks, as is the best track on album, “(A Minute for) Ruby Skate.” I catch myself singing the chorus repeatedly in my head and sounding out its poignant guitar hook. “Eastern Clothing Rewind” harkens back to Smug Brothers earlier, more lo-fi and GBV inspired material. They close out their side of Echo Complex with the wonderfully murky and distorted “All the Right Territory.”
Brat Curse’s side of Echo Complex is a bit rougher around the edges, a bit more punk in its approach. The trio consists of Justin Baker on bass, Brian Baker (also a member of Smug Brothers) on guitar and vocals, and drummer/vocalist, Chris Mengerink . Their seven tracks are not a polar opposite of Smug Brothers; there are still delightful hooks, and shifts to enjoy in all their tracks, Brat Curse just layer it with noise and an edgier, more raucous sound. “Gutters” opening is reminiscent of a lost Hormoaning-era Nirvana track. I would dare say these guys grew up listening to a lot of 90’s indie and alternative rock. I can hear bits of The Pixies, Nirvana, and Guided by Voices. They also boast a nice cover of a Beck’s “Cyanide Breath Mint” from One Foot in the Grave.
Overall, I was pleasantly pleased with the EP as a whole. Smug Brothers continue to make some of warmest and welcoming indie pop and Brat Curse’s contribution was an eye-opener. I will be sure to dig into their past and keep an eye on their future.
Key Tracks: “(A Minute for) Ruby Skate” / “Razor Thin Races” / “Gutters”
Artists With Similar Fire: Nirvana / Guided By Voices /Pixies