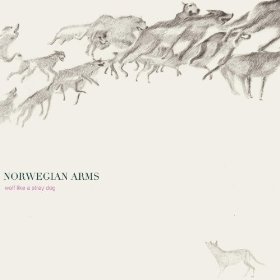 Fire Note Says: Wolf Like a Stray Dog is a diverse and impressive sonic soundscape!
Album Review: I suppose if you have to label Norwegian Arms, you could call them Weirdo-Folk, Psych Folk, Freak Folk etc, but the more that I think about it, the tag doesn’t really matter. What matters more than being part of some movement that most people really don’t care about is “is it any good”? With Wolf Like a Stray Dog, the answer is “yes, it’s very good”. The Philadelphia trio has created an album that deserves to be heard by fans of Animal Collective, Panda Bear, Dirty Projectors, Au, and Dodos.
As with early Animal Collective, the percussion and vocals are front and center, with the rest of the backing music adding accents and serving as support, however, it’s more accessible than that band was early on. Sonically, it’s as if Animal Collective had the songs and melodies from Merriweather Post Pavillion back when they recorded Sung Tongs. It is also interesting to note that the record was written while songwriter Brendan Mulvihill spent a year in Siberia, yet the inevitable evidence of extreme weather and isolation is not immediately apparent in the music, it’s a very sunny and optimistic sounding record.

Highlights are a plenty on this record, so it’s hard to really single out a few key tracks, because the album doesn’t really work like that. It’s more about the flow of the songs and ideas meshing into one big sonic experience. At less than 30 minutes in running time, it’s really easy to replay the record as soon as it’s finished, it’s highly addictive! The run of songs from 4-6, “She Lives In A Secret Town”, “My New Toy Piano” and “Soviet Bicycle” is my favorite stretch on the record. It features remarkable vocal turns as well as outstanding percussion. “Tired of Being Cold” is clearly the most obvious reference to the conditions under which the album was written, however, the English major in me wonders if it’s a direct reference to the conditions which surrounded Mulvihill, or more a condition of the heart which plays out due to the distance from anything he feels connected to.
With Wolf Like a Stray Dog, Norwegian Arms have crafted an remarkably strong debut album. Normally it takes a few full lengths for a band to craft such a diverse and impressive sonic soundscape, but these guys have done it right out of the gate! Definitely a band to keep an eye on!
Key Tracks: “She Lives In a Secret Town”, “My New Toy Piano”, “And Then I Found Myself in the Taiga”
Artists With Similar Fire: Animal Collective / Dodos / Dirty Projectors
Norwegian Arms Website
Norwegian Arms Facebook
Big School Records
-Reviewed by Kevin Poindexter