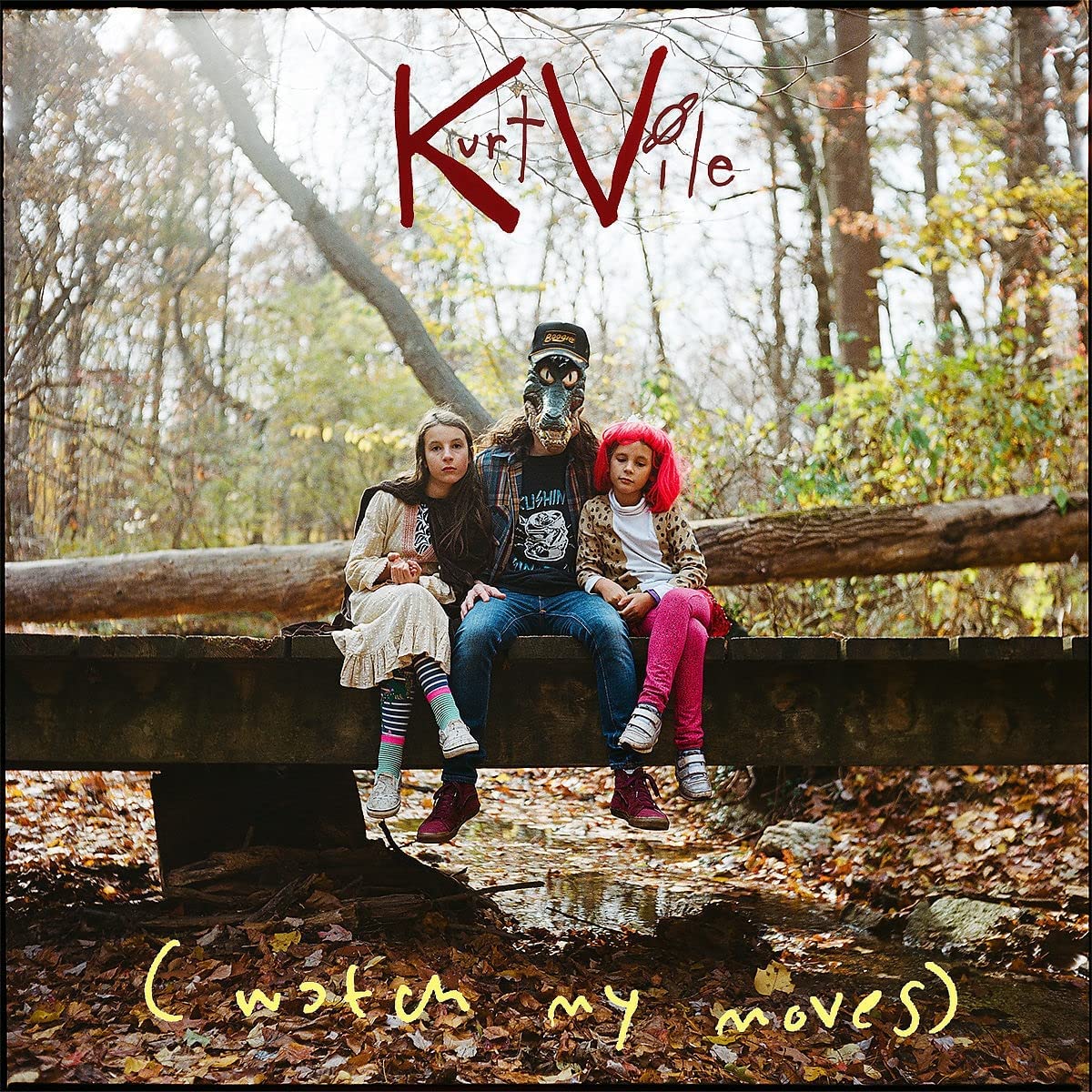 (watch my moves), the ninth studio album from Kurt Vile if you include his collaboration with Courtney Barnett on 2017’s Lotta Sea Lice, finds the Philadelphia-based folk/rock singer/songwriter guitarist in now familiar territory. A traditionally laid-back creator of jangly guitar rock, Vile used some of the pandemic shutdown to build a home studio, OKV Central, which gives (watch my moves) an especially relaxed and homey feel, with Vile working with his usual mates, co-producer Rob Schnapf and members of his touring band, The Violators, on much of the album.

The track “Palace of OKV in Reverse” appears to play on the studio name together with a songwriter convention used literally in taking the “second verse the same as the reverse” of the first. And it sounds like Vile is singing over a recording of his guitar tracks playing, you guessed it, in reverse as well. What’s the point of building a recording studio in your basement if you can’t have fun with all that gear? He follows that with “Like Exploding Stones,” an image that suggests the bursting pain of a migraine or the kind of stress attack a creative is likely to encounter when they realize that playing the music they love is also “the way I make my living.” As he’s writing the song, he imagines a “Moog making noises,” and “guitars feeding back now/feedback massaging my cranium,” something that having his own studio can make a reality.

One track here, “Jesus on a Wire,” was recorded in early sessions with singer/songwriter and producer Cate Le Bon, who sings and plays piano on the track. Vile turned to members of the band Chastity Belt, who Barnett had introduced to him, to play on the song, “Chazzy Don’t Mind,” which he works into the lyric, “my girlfriend’s Chazzybelt/they got a song like this too, prolly but/I don’t mind.” The band’s Lydia Lund and Julia Shapiro play guitars, Annie Truscott adds violin, and the three women sing backing harmony vocals. The album opens with a fun if simple piano based track, “Goin on a Plane Today,” which adds a bit of horn accompaniment on the back half, then on “Flyin (Like a Fast Train), Vile relies on a drum machine to lock down the grove, but for the most tracks Violators’ drummer Kyle Spence and popular session drummer Sarah Jones divide the rhythm chores. Violator Jesse Trbovich adds a variety of instrumental support throughout, while most of the bass duties fall to Rob Laakso, also of Vile’s travelling band.

Vile’s tendency to lock in to a relaxed, steady rhythm is so reliable here, that you really notice of tracks like “Fo Sho” and “Say the Word” turn the tempo up a notch, and the way that brings extra jangle to Vile’s guitars, and in those more conventional grooves you look for extras like the slide guitars in “Mount Airy Hill (Way Gone).” In “Hey Like a Child,” Vile celebrates his wife and children, taking notice of how they influence the “blueprint” of “the way that I do this,” just like in “Fo Sho” where he “even if I’m wrong/gonna sing-a-my song/’til the break of dawn,” while the tries to “peal another smash poem/out a yellow legal pad for ya, baby.” But, Vile is self-aware enough to know “it’s probably gonna be another long song.” And, more often than not here, that’s the case with plenty of room for Vile’s guitars to do the work he came to do.

But the longest song on (watch my moves) is the one track not written by Vile; his loving cover of Bruce Springsteen’s deep cut, “Wages of Sin,” over which he lingers with respect, allowing the synths to carry the song to it’s close. Just as the album opens with a couple curve balls, “Kurt Runner” is a hauntingly mellow instrumental, while “Stuffed Leopard” is a talking, rambling acoustic number, like a story you might tell your children at bedtime. Kurt Vile is not reinventing himself here, he’s leaning into his strengths and making himself and his fans a safe place to play.