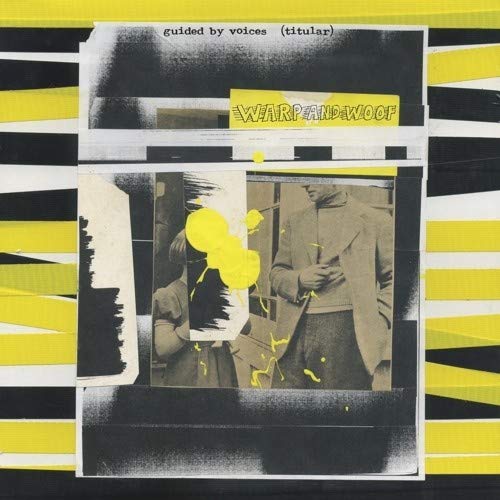 Fire Note Says: After a couple recent near-masterpieces, Guided By Voices release the uniquely-curated album Warp And Woof!
Album Review: As I sit here on a beautiful spring day in Bellefontaine, Ohio my mind keeps wandering. How do cell phones work? Why do people watch Fox News? How do birds find their way south each winter? Why won’t the in-law’s just move out already? But mostly: How does Bob Pollard keep writing quality material after all these years? It’s a damned mystery. Maybe it’s the beer. Maybe it’s the vegetarian diet. Or maybe we who call ourselves fans are too biased to make that call. Objectivity is probably not why I’ve been commissioned to write this piece. I have indeed drunk the Kool-Aid. But for those who have not, Warp And Woof is made from songs previously released as four six-song EP’s. All 24 songs are included here however the running order has been altered and it is that song sequencing that turns out to be one of the album’s strongest assets. Songs that, for whatever reason, once languished in mid-tempo purgatory now shine brightly.
Overall, the songs on W&W are more direct than the last two Guided By Voices LP’s, both of which boasted widescreen production and prog-informed moments of controlled bombast along with the familiar fare of drunken Midwestern Indie Rock and jangly, off-kilter pop. Only two of the tracks here even surpass the two minute mark including the sublime “Blue Jay House” which manages to clock in at 2:02. Even if these songs wanted to run off the rails the time constraints of the original EP format forbids it. They make their point and then make way for the next up – short blasts of raw and primal rock. This philosophy squares with Pollard’s overarching work ethic perhaps better than any of the other records this lineup has yet produced. The resulting album isn’t perfect but this low stakes type of endeavor affords Mr. Pollard a certain freedom of action that’s infectious.
Take a tune like “Dead Liquor Store.” This song, with it’s weird left turn, probably would have been stretched out to double its length on Space Gun or Zeppelin Over China. Here it’s a tidy 91 seconds. Even the radio-ready hit-that-never-happened, “My Angel”, keeps it short and sweet. Also noteworthy is that none of these tracks come off as unfinished or mere filler – they are all fully formed. Sometimes one hears echoes of earlier songs (“Even Next” sounds a lot like “In A Circle” from the solo Pollard album Lord Of The Bird Cage for example) but the vast majority of the material here is astoundingly vital sounding. Subtle touches like the fake crowd noise on “More Reduction Linda” and “Coming Back From Now On” or the guitar effect on “Skull Arrow” show the band is having a blast while Pollard affects his voice in more (annoying?) ways than usual as if alter-ego Cash Rivers had made an appearance or two in the studio.
For an album built on the idea of song sequencing I suppose it’s only fitting that the last track is “End It With Light” and it not only feels like an album closer it also would work well as a set closer in a live setting. And with that 24 songs (in a mere 38 minutes) has transpired. Collections of non-LP tracks don’t always curate into a decent album but Pollard’s intentions were made clear from a note written on an old school typewriter back in July of last year describing Guided By Voices’ 2019 release schedule. With abundant cross-fading and well-thought out song groupings Warp And Woof is far better than I had hoped it would be after listening to the source material. It sounds punchier as if mastered slightly hotter but all the recent GbV albums have had the Travis Harrison magic post-production touch. And the band has never sounded looser yet more connected. Guitarists Doug Gillard and Bobby Bare Jr have really learned to play off each other while the rhythm section of Mark Shue and Kevin March hold it all down with bad intentions. This is a band on a mission. Warp And Woof may not be the best thing they’ve released but it was never meant to be. It’s a bunch of good songs that don’t overstay their welcome. Unlike the wife’s pesky relatives!
Key Tracks: “Dead Liquor Store” / “Blue Jay House” / “My Angel”
Artists With Similar Fire: Bob Mould / Paul Westerberg / Stephen Malkmus
Guided By Voices Website
Guided By Voices Facebook
Rockathon Records
– Reviewed by Scot Lade