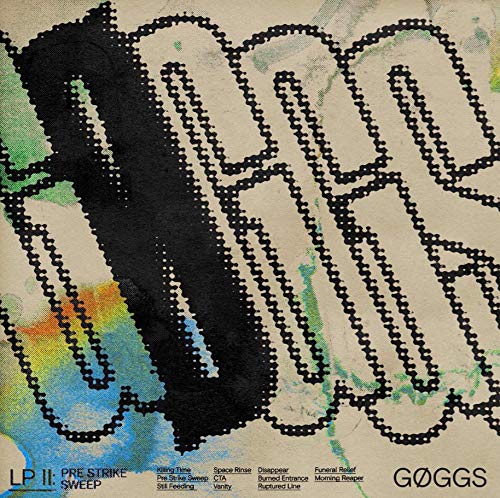 Who: Ty Segall, Charles Moothart (Fuzz, CFM) and Chris Shaw (Ex-Cult) record another rousing fuzz punk record.
Sound: GØGGS’ second release proves they are no fluke. Pre-Strike Sweep is a force to be reckoned with.
TFN Final Take: I am not a huge Ty Segall fan by any means, I have a few of his albums and have followed a few of his side projects with moderate but never rabid interest. I waded into GØGGS more so because of CFM and Ex-Cult, two bands that I enjoyed far more than any Ty Segall album.
The combined chemistry of Segall, Moothart and Shaw is a heady concoction. GØGGS did not let me down. It is more punk than psych rock, but the punk is tinged with a nice dose of fuzz that will make fans of bands like Fuzz and Meatbodies happy. I kind of hear a similarity to another punk favorite, The Spits. It is rough and gritty but there is some pop and levity to the sound.
Pre-Strike Sweep is full of energy. The album kicks off with “Killing Times” tense beginning before giving way to a full-on hardcore punk assault. Track 2, “Pre-Strike Sweep” is a buzz saw, “Space Rinse” and “CTA” are mosh-worthy anthems but GØGGS don’t assail you track after track with punk rock riffs, there is plenty of variation with slower tracks like “Vanity” (until it picks up the pace towards the end) and the groovy offering of my favorite track, “Ruptured Line”.
This was my first GØGGS album, but it won’t be my last. I somehow missed their excellent self-titled 2016 debut, but ended up buying it shortly after I was hooked by Pre-Strike Sweep. If you are a fan of Ex-Cult, and CFM and any of the numerous Ty Segall albums, GØGGS should be considered an essential purchase. It may be one of the best albums of 2018.

In The Red
– Reviewed by Daniel Taylor