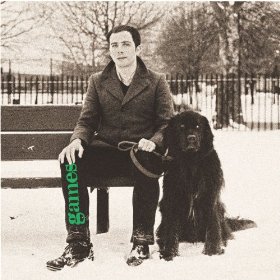 Fire Note Says: GAMES is PURE GOLD!
Album Review: If I had to pick my top 5 current record labels, Chicago’s HoZac would be in the running for the top spot. The label has created a brand if you will; it’s the home of some of the finest psychedelic/power pop/punk/garage music being released. Before I ever did any background research at all on GAMES, I already wanted to hear it. After discovering that lead GAMES-er Jeremy Thompson was a member of The Busy Signals, who had put out a fine self-titled punk record in 2007, which fully captured the vibe of 1979, I knew I was in for a treat.
The GAMES lp delivers from the word go. This is not the punk music that was on display with The Busy Signals, this is power pop, but similar to like-minded bands like the late great Exploding Hearts and Gentleman Jessie, there is actually power in this pop, and that makes all the difference! Out of the 10 tracks on the record, 9 of them are winners. The only semi-dud is “Sad and Blue” not only does Thompson’s voice noticeably strain, but the song sounds like just about every mid-70s Flamin’Groovies track. Other than that song, GAMES is PURE GOLD.

Album opener “Listen” sounds instantly familiar yet completely new, if you aren’t hooked within the first 20 seconds of the song, you need to be checked for a pulse. “It’s Just Impossible” follows “Listen” and it ups the ante by throwing in some Elvis Costello-esque keyboards circa This Year’s Model. The hooks, and catchiness never let up, though the tracks are definitely varied enough to give the album a nice arc, which is always important to me as a listener. “When The Time” is a fine example of the band slowing things down without sacrificing any of the intensity or tunefulness.
Power Pop is a much maligned genre of music, so many of the bands that play it, follow a basic sonic template. Each note is perfect, each chorus is exactly where it should be, and it suffers because of it. There’s no real power in the pop. It’s a genre exercise. Every so often, a band like GAMES comes along and blows up those conventions and makes power pop sound like it should. The power has now been officially restored to pop. Thank you GAMES.
Key Tracks: ”Listen”, “Take a Dare”, It’s Just Impossible”
Artists With Similar Fire: Flamin’ Groovies / Exploding Hearts / Gentleman Jesse
GAMES Facebook
HoZac Records
-Reviewed by Kevin Poindexter