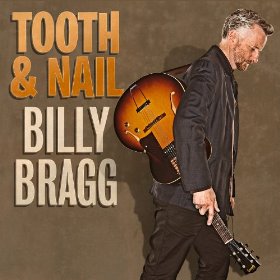 Fire Note Says: Billy Bragg walks the dusty road and gets more personal than political this time out.
Album Review: Billy Bragg has never been an artist that America has ever really understood. Mostly because dating back into the early 80’s his anti-folk electric guitar songs about politics and love typically addressed his domestic UK issues. Now I would say that most people really took notice of Bragg’s talent when he teamed up with Wilco for The Mermaid Avenue records in the late 90’s. This more Americana version of Bragg fit nicely as they took the words of Woody Guthrie and created some spectacular art.
I don’t believe the impact of those recording sessions ever has left Bragg completely and his new long player Tooth & Nail confirms that idea with its very simplistic and folk approach. In fact, “I Ain’t Got No Home” once again brings the words of Guthrie to life as Bragg tells the story of a struggling man over a simple guitar and piano backdrop. This style fits Bragg and when you add in producer Joe Henry (Solomon Burke, Aimee Mann, Elvis Costello) with the Dobro, mandolin, pedal steel, autoharp and pump organ you just know what kind of album is in store for you. 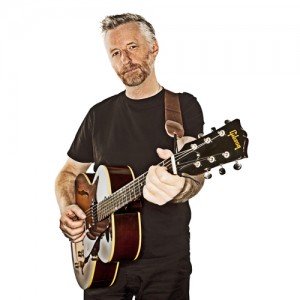 This more laid back folk works for Bragg but in the same breathe it also holds Tooth & Nail back because it is such a safe and somewhat predictable path. With that said, “No One Knows Nothing Anymore” is a gorgeous track and one of the better songs Bragg has written in years while “There Will Be A Reckoning” feels a bit more like the old Bragg as it is plugged in and even has a “Springsteen” vibe to it. I would have liked to see more balance on Tooth & Nail with other tracks similar to Reckoning’s tempo. Without the tempo changes some of the tracks have a similar overall sound and are not nearly as memorable as they probably should be.
Regardless on direction here no one can deny that Billy Bragg is a true underrated artist. Tooth & Nail has great writing, great musicianship and is 100% class. Bragg was definitely out of his comfort zone as all the vocals were recorded live without retakes or overdubs which takes guts. Tooth & Nail also features an accomplished crew of musicians, including Greg Leisz (Bon Iver), Patrick Warren (Lana Del Rey), Jay Bellerose (Regina Spektor) and David Piltch (Ramblin’ Jack Eliot). All of this may not be enough to keep me coming back to Tooth & Nail for many repeat spins but if you have been a fan I don’t think there is any reason you shouldn’t enjoy this album as well! Billy Bragg will probably never break out here in the States but if you have never checked out his material Tooth & Nail is strong enough to be a first listen and then work your way back – If you do that I will predict you easily will be hooked.
Key Tracks: “No One Knows Nothing Anymore”, “Your Name On My Tongue”, “Over You”
Artists With Similar Fire: Ryan Adams / Frank Turner / Peter Case
Billy Bragg Website
Billy Bragg Facebook
Cooking Vinyl Records
-Reviewed by Christopher Anthony

Golden Grrrls share video for “Take Your Time,” / Kick Off US Tour Today