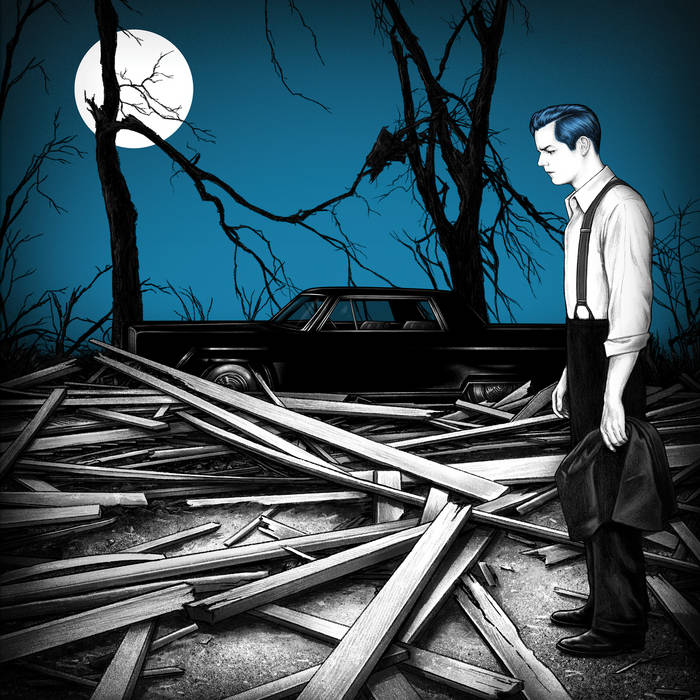 There’s a moment in the 2008 guitar rock doc “It Might Get Loud,” featuring Jack White, Jimmy Page of Led Zeppelin, and U2’s The Edge, when Page starts to play his rock hit classic “Whole Lotta Love,” and the other two’s cool demeanor cracks as fan boy smiles come across their faces. The Edge stands up and moves closer to see Page’s hands, and White, who played along when Page showed them the song “Kashmir,” put his guitar down and watched the master. Often when I’m listening to White play one of his own monster hooks, I recall the moment. Other times, I recall the opening scene of the movie, where White straps a piece of wire to a board with a couple nails, and an empty Coca-cola bottle for tension, attaches an electric pick-up, plugs it in and creates an eerie slide sound that bristles on the edge of feedback. White’s musical impulses seem pulled equally in both directions, bold, sometimes brutal guitar riffs, and experimental song structures with a high tolerance for noise, on his fourth solo album, Fear Of The Dawn.

The album opens with a trio of smash ‘em up, crash ‘n burn rockers, “Taking Me Back,” which crosses epic guitar chord hooks and long melodic riffs played on guitar and echoed back on synths, the driving, faster nu metal vibe of the album’s title track which features some tortured soloing from White and a howling wind sound produced by a theremin in the video, and “White Raven” with its loping simple bass line hook contrasted against a fast thrashy rhythm that’s part punk and part German kraut-rock electronica. To be honest, it’s a lot to take in, and takes several listens before the songs come together as a more than the mere sum of some very disparate parts, when your ears eventually adjust the grooves and melodies begin to reveal themselves.

Next up is “Hi-De-Ho,” which finds White reinterpreting the Cab Calloway’s 30’s jazz be-bop number of the same name, tapping A Tribe Called Quest’s Q-Tip to rap a lyric that name drops Chuck Berry, Mariah Carey and more. It’s a mix mash of fun melodic bits, some funky dance rhythms but never resolves into something that feels like a complete musical statement. The experimental feel follows into “Eosophobia,” the Greek word for the morbid fear of daylight or dawn, so yes the album has a loose lyrical theme borrows some musical ideas from classic rock’s big chordal movements with hints of progressive guitar runs but again it’s still a pastiche of different musical movements more than a singular statement. In “Eosophobia (Reprised),” which shows up later in the disc, White gives the guitar riffs and vocal melody line a tad more focus and does some hot guitar shredding to boot, it’s a fine example of the benefits of allowing the music’s elements to cohere into a meaningful whole.

“Into the Twilight” feels familiar to that Frankenstein mix and mash vibe on “Hi-De-Ho,” this time on a lyric from a Dizzy Gillespie song and tapping a couple of samples from jazz vocal group Manhattan Transfer. There’s some quieter piano before things get utterly weird, but again the desire to reward experimentation is tempered by the grim fact that not every experiment lives up to one’s hopes. “What’s the Trick” is a riff heavy rocker in the Rage Against the Machine vein, but at least it’s a complete song driven by a coherent musical idea. And there’s lots of places here where White’s heavily processed guitar sound does feel a lot like Tom Morello’s fretastic approach, but as a fan of his earlier White Stripes and more recent work with The Raconteurs, White’s guitar heroics are second to none, he’s pretty much able to play whatever he wants on an electric guitar. These days, it’s about his choices, some more pleasant and enjoyable than others.

By the time you get to the penultimate “Morning, Noon, and Night,” the song’s rather quaint 60’s rock feel is pure relief, with it’s pristine keyboard soloing. In the closing pop rock of “Shedding My Velvet,” White claims “this is the real me,” but we’ve played that game with him a few times before. We’ve already been told to expect a second folk album from White in just a couple more months, but as eccentric as some of his solo work has been, there’s enough of the touch of genius to bring fans round to see what he’s up to. Each time I’ve listened through Fear Of The Dawn, I hear new elements that grab my attention, his diverse guitar sounds and tones interfacing with keyboards and other synths, a compelling bass line, the sonic pop of the snare when he’s using real drums. So much going on in this big messy collection of songs. Back in the Stripes he was in many ways a one-man-band, playing most of the instruments, writing and singing the songs, producing the end results, so it’s no surprise to hear him running the show here.