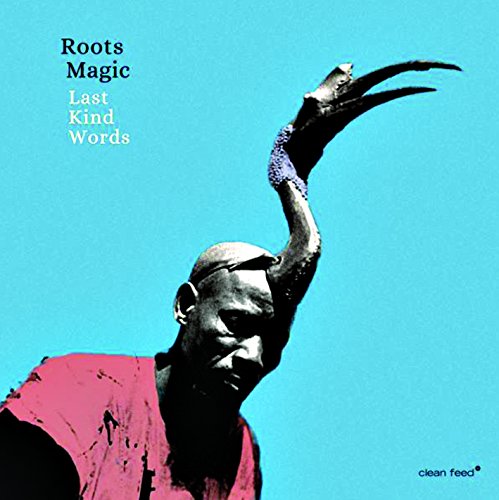 Fire Note Says: Roots Magic delivers hard-hitting interpretations of delta blues and free jazz classics.
Album Review: Roots Magic is a quartet of Italian musicians: Alberto Popolla on clarinet and bass clarinet, Errico De Fabritiis on alto & baritone saxophone, Gianfranco Tedeschi on bass, and Fabrizio Spera on drums. Their second release on Clean Feed records continues the band’s deep engagement with African-American delta blues and experimental jazz. The late, great Lester Bowie, trumpeter in the Art Ensemble of Chicago, once claimed in an interview that his primary concern as a musician was “good old country ass-kicking.” I don’t know how that might translate into Italian, but based on the evidence of Last Kind Words, these four signori seem to understand the sentiment.
In any case, their selection of repertoire is impeccable. Take, for example, “Last Kind Words Blues”, a minor-key classic recorded in 1930 by Geeshie Wiley, who sang and and accompanied herself on acoustic guitar. The Roots Magic arrangement of this tune maintains the dirge-like quality of the original recording, but extends it into all-out free jazz skronk of the Peter Brotzmann school.
“Tom Rushen Blues” stands out among several Charley Patton blues songs included on the album. The quartet adds a cellist to this bottom-heavy interpretation of the tune, which features bass clarinet and baritone sax over a rolling groove that would fit right in on a Tom Waits album. On “Oh Hush”, which is based on Charley Patton’s 1934 recording, “Oh Death”, the band brings some serious funkiness to the proceedings, by adding organist Luca Venitucci (who plays on three of the album’s other songs), while the drum part traces the connections between New Orleans second line rhythms and the R&B of the Meters.
Roots Magic’s interpretations of more modern tunes are also highly successful. Indeed, a key part of the genius of Last Kind Words is that way that the album makes anachronistic connections between songs written many years apart. Marion Brown’s 1979 tune “November Cotton Flower” is a lovely and soulful ballad, and its sequencing at the center of the album gives the listener an opportunity to relax and reflect before the band kicks back into high gear with a cover of Julius Hemphill’s stone-cold classic “Dogon A.D.” (from the 1972 album of the same name). The album closes with a dub-influenced version of Henry Threadgill’s “Bermuda Blues” (a highlight from his 1986 Sextett album, You Know the Number).
Throughout Last Kind Words, Roots Magic celebrates the original source material without being intimidated by it. The band’s willingness to take chances has paid off in a great album.
Key Tracks: “Tom Rushen Blues” / “Dogon A.D.” / “Bermuda Blues”
Artists With Similar Fire: Lounge Lizards / World Saxophone Quartet / Art Ensemble of Chicago
Roots Magic Website
Clean Feed Records
– Reviewed by Everett Wallace