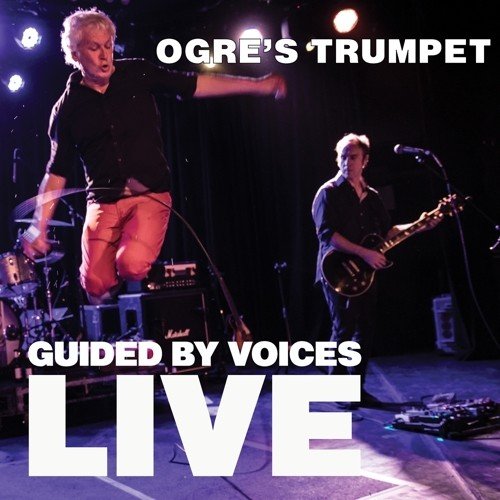 Fire Note Says: The latest incarnation of a legendary band proves they’re still a deadly live act.
Album Review: Sometimes bands release live albums as nothing more than sleazy cash grabs or they may be bankrupt of new and original ideas so they endlessly repackage past glories. But every now and then the reason for a live album’s existence is obvious – and this is one such record. What is this reason, you ask? In the case of Ogre’s Trumpet, the first true canonical live album in the bands history, this is Robert Pollard having a dynamite band, playing at a really high level, and he wants you to know it. He is quite proud of this version of the band which includes (for those not keeping up) Doug Gillard, Kevin March, Bobby Bare, Jr. and Mark Shue. It’s a lineup that Pollard has rightfully declared the best Guided By Voices yet. This album serves not only to document this but also to immortalize it.
Taken from an August 2017 show in Asbury Park, New Jersey, Ogre’s Trumpet clocks in at 70 minutes and 25 songs – not a full set list but a finely curated sample of a typical night with Uncle Bob and the boys. What works so well here is the sequencing preserves a story arc and Pollard’s penchant for “playing the hits at the end of the show.” Four of the last six songs are confirmed fan favorites including a very solid rendition of “Game Of Pricks.” They’ve been playing this live since forever and it still has a unique power to charm. Gillard’s guitar has always infused this classic with his Les Paul slinging heroics. The older tunes all fare well but “Gold Star For Robot Boy” deserves special mention. On Bee Thousand the track was a twangy (and beautiful) mess; here it’s given a fresh coat of paint without sacrificing any of the song’s subtle nuances. To go on too long about the old does a grave disservice to the new and that is where GbV lives. Eleven of Ogre’s tracks are from the latest two albums: August By Cake and How Do You Spell Heaven. And this is where the band truly shines. Pollard seems to understand how to keep the band motivated too. It is a more democratic group as evidenced by the inclusion of the Gillard-penned “I Am A Tree” (on which both he and Pollard sing lead) and “Sudden Fiction” written and sung by bassist Mark Shue. The newer material shows the band in their element. Songs like “King 007” (originally from How Do You Spell Heaven) explode into life. While the studio versions of many of these tracks are just fine it’s clear they were born to be played live. Another example of this is “Cheap Buttons”, a song from August By Cake that never made a huge impression on me. Maybe it’s simply that these recent tunes are more in Pollard’s current vocal range. Whatever. The net effect is stunning.
There are a few surprises in the set list – most notably a cover of The Monkees “Saturday’s Child.” This kind of freaked me out as Andy Partridge of XTC recently cited this song as one of his favorite tunes ever. When the two greatest living songwriters concur on something, well, it just might have some merit. And GbV’s take on this overlooked gem is devoid of irony. It merely rocks. That, in short, is what Robert Pollard is offering. He is still a lost soul. He still shoots himself with Rock And Roll. Yes, sir. There’s also a song from ESP Ohio (the side project that morphed into this Guided By Voices lineup) as well as one from his excellent solo album From A Compound Eye, once again blurring the line between the man and his band (as if he ever made that distinction.) Either way, no one comes to Pollard for sonic perfection. They certainly don’t get it. There are plenty of bum notes, wrong chords, voice cracks and hesitant starts. But this is a pure live LP without post-production “sweeteners.” It’s raw and it’s real – much like the artist himself. Nothing else, in fact, behaves like Robert Pollard.
Key Tracks: “Gold Star For Robot Boy” / “Saturday’s Child” / “Game Of Pricks”
Artists With Similar Fire: Wire / The Who / Cheap Trick
Guided By Voices Website
Guided By Voices Facebook
Rockathon Records
– Reviewed by Scot Lade