Tedeshi Trucks Band: I Am The Moon: III. The Fall [Album Review] 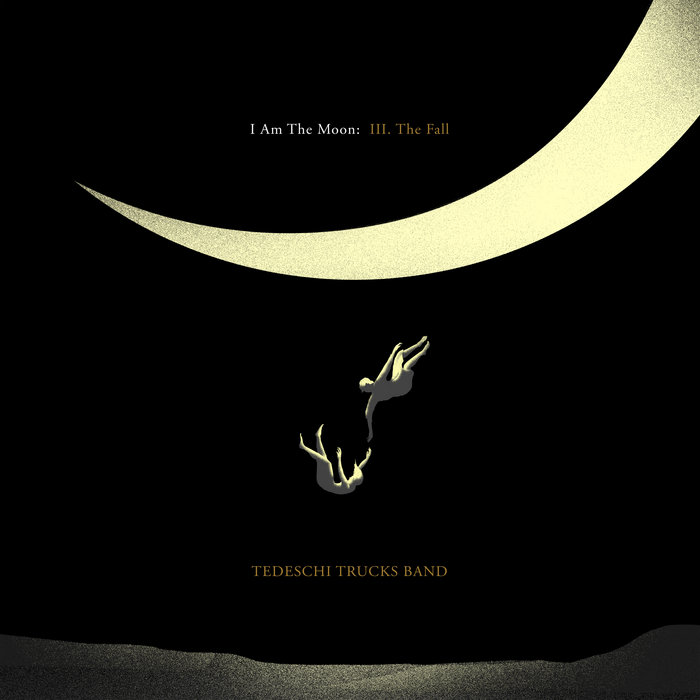 Tedeschi Trucks Band
I Am The Moon: III. The Fall
Fantasy / Concord Music [2022]

The amazing enterprise that the Tedeschi Trucks Band undertook by dropping an EP of material from their massive master-work, I Am The Moon, for four straight months, continues with the 6-song collection, III. The Fall which builds on the musical breadth and dexterity of the earlier releases. With the final release in a month’s time, the 24-song opus will be complete, with several songs from this chapter in competition as real standouts.

“Somehow” opens the album, written in the now classic soulful R&B style of Tedeschi Trucks by keyboardist Gabe Dixon and Tia Sellers, who’s written for Kathy Mattea and Vince Gill in the past. It serves up a melody and lyric that’s a perfect fit for Susan Tedeschi’s warm, emotional vocal delivery, and Derek Trucks matches that with an electric, slide guitar solo that elevates the whole piece, framed nicely by TTB’s strong horn section and vocal chorus. Similar in tone and bluesy spirit is “Yes We Will,” which finds Tedeschi’s hot lead vocal supported by the gospel choir feel of singers Alicia Chakour, Mark Rivers, and Mike Mattison, with the tempo cooking thanks to drummers Isaac Eady and Tyler Greenwell, and Brandon Boone on bass. Here, both Tedeschi and Trucks take spirited guitar solos fueled by the song’s inner fire.

“Gravity” is another winner, again by Dixon who sings lead, writing this time with Oliver Wood of the Wood Brothers, who’s contributed to TTB albums in the past. It’s a piano-driven jazzy blues number with lots of New Orleans brass feel, from trombonist Elizabeth Lea, Ephraim Owens on trumpet, and Kebbi Williams on sax. There’s plenty of room for Trucks’ slide guitar soloing and fills, plus a number of bouncing piano solo breaks from Dixon; it’s a joyful jam right to the jaunty horn-led final chops.

“None Above,” is a gentle pop number from Tedschi and Mattison that promises that the “ties that mind us” will sustain us in “battle for your soul.” It’s born of the hard-won optimism of those who’ve faced down disappointment while holding on to those they love. “Emmaline” is pure country, with Mattison offering lead vocal, and Dixon providing the honkytonk piano fills that sell the bittersweet waltz. The EP closes with “Take Me As I Am,” sung by Tedeschi and Rivers, with rich churchy gospel-chorus vocals led by Chakour that bring this moving ballad’s efforts at a shared identity affirmation led once again by the emotional tone of Trucks’ slide guitar. It’s a song grounded in the idea of mutual respect and support against the grain of a culture that seems all to eager to pull us apart.

I just saw the Wheels of Soul summer tour recently with headliner Tedeschi Trucks Band joined by Los Lobos and Gabe Dixon, where the values of community, mutuality, and generosity were apparent throughout the lengthy night of music and sharing exhibited on and off the stage. Both the tour and this long, experimental album project have proven to be highlights of the summer of 2022, fans of this soulful music should partake freely, and often.

Hooveriii: A Round Of Applause [Album Review]

2 thoughts on “Tedeshi Trucks Band: I Am The Moon: III. The Fall [Album Review]”