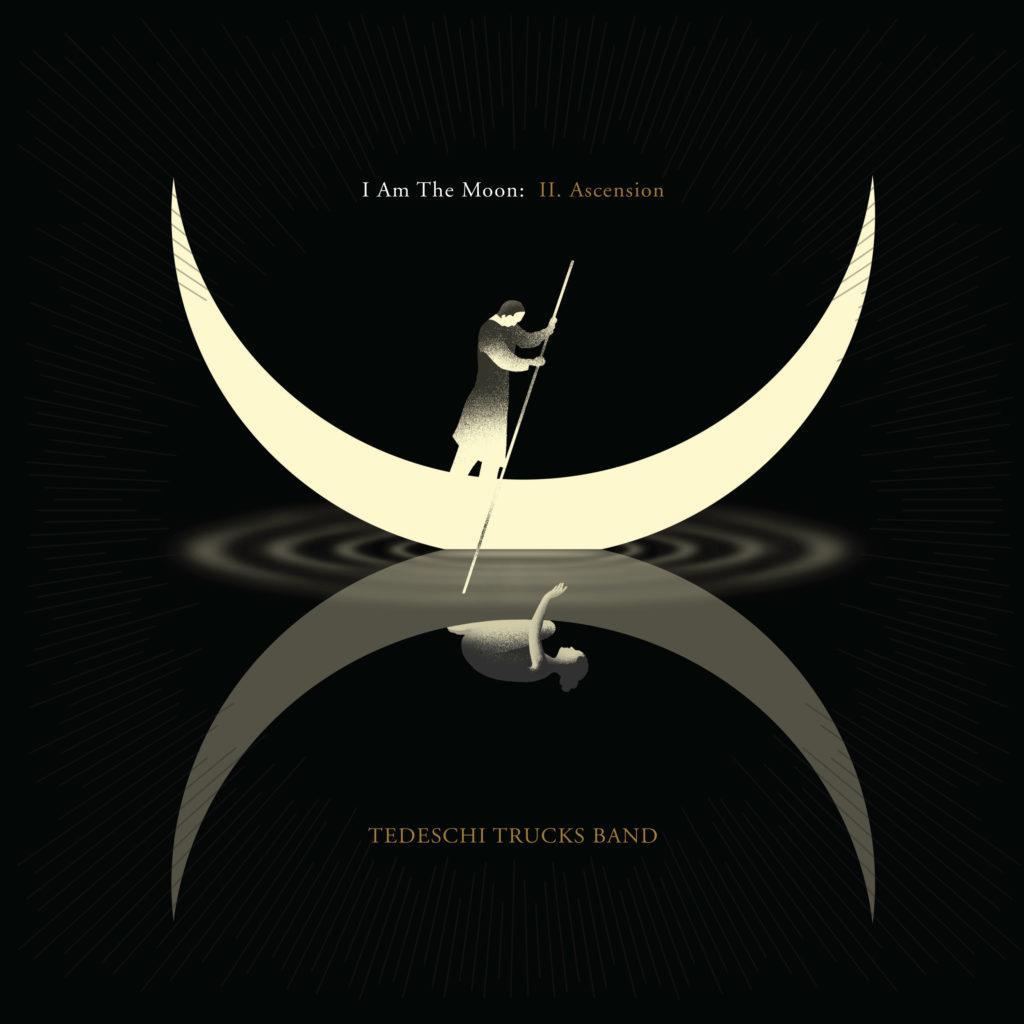 As promised, a month after the initial EP from the “I Am The Moon” project, Tedeschi Trucks Band returns with this 7-song second chapter, a further continuation of this thought experiment fleshed out in the band’s rich, musical vocabulary. On I. Crescent, especially in the lengthy closing instrumental jam “Pasaquan,” there was a sense that guitarist Derek Trucks was tapping into the musical tradition and artful energy of the Allman Bros. and all that led his band to this moment. This record continues the concept we covered in depth in the previous review, check it out there.

While II. Ascension continues the band’s journey on that soulful path, here there are moments where they linger in a more reflective way over some of the quieter, more trance-like sections. This is most notable here in the jazzy ballad “All The Love,” where Susan Tedeschi emphasizes the song’s accessible pop melody at the front end, before the spacy, somewhat psychedelic jam that allows the guitarist and horn section’s members to express a more experimental aspect of their collective in a less hurried fashion.

The EP opens with two strong examples of the band’s fluency in soulful R&B song structures, the delicate balance of a pop vocal sensibility with lush horns, Gospel-tinged backing vocals, and Trucks’ elegant slide guitar soloing. “Playing With My Emotions” presents Tedeschi’s vocals and the very capable big band brass sound of the TTB in classic fashion. “Ain’t That Something,” with Gabe Dixon as the male vocal foil to Tedeschi and the other background vocalists, takes that energy and soulfulness up a notch, allowing for room for classic guitar fills from Trucks and his signature slide sound.

“So Long Savior” feels like a traditional acoustic Gospel blues, but at less than 3 minutes it may be the shortest track the TTB have ever recorded. The bluesy ballad “Rainy Day,” builds into a full-on soulful R&B chorus, Susan Tedeschi’s vocal and Derek Trucks’ melodic guitar soloing resting on the lush bed of the horn and backing vocal chorus. It’s a lovely display of this lush, big band’s strengths. Similarly “La Di Da” is a ballad built on a classic folk structure, which the TTB’s players have been comfortably adapting to their own uses for over a decade.

The set closing “Hold That Line” simmers tastefully, the gentle flowing rhythm rooted in the gentle, melodic slide guitar soloing of Trucks, while Tedeschi and Matt Mattison harmonize on the vocals. While again, this is a lovely, soulful track it’s that inimitable slide guitar sound and the band’s gentle restraint that make it standout, from the electric piano accents to the horn sections’ response. Again it’s the consistent instrumental prowess, delivered in an unassuming virtuosity that makes these new songs from the Tedeschi Truck Band such a strong addition to an already impressive catalog. And there are two more EP’s planned to drop just this summer.

Tedeschi Trucks Band have found a way to gracefully accept the mantle as the carriers of the Allman Brothers Band flame, without losing themselves in the meantime. Here on the first of four installments due this summer, they both embrace that legacy, and highlight the other strengths that arise from Tedeschi’s vocal strength, and this talented, amazingly versatile collective. The strength of Moon: I. Crescent surely raises expectations for what is likely to follow, perhaps a career defining effort.

Archers Of Loaf – “In The Surface Noise” [Video]