Tedeshi Trucks Band: I Am The Moon – I. Crescent [Album Review] 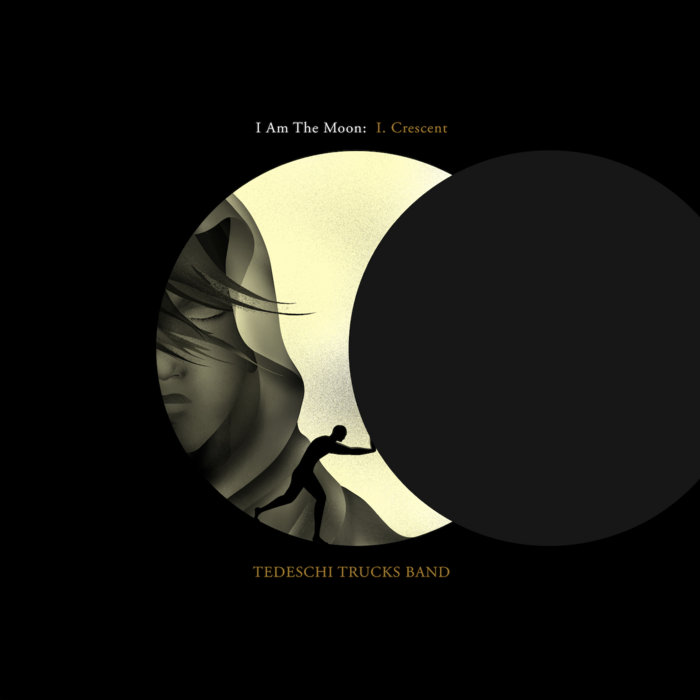 Tedeshi Trucks Band
I Am The Moon: I. Crescent
Fantasy/Concord Music [2022]

When singer/songwriter Susan Tedeschi, already with six albums and a storied career to her credit, and slide guitar wunderkind and Allman Brothers Band acolyte Derek Trucks joined their romantic lives, and then their two bands together, it was obvious they were a courageous lot. Now, with four solid studio albums, and numerous live albums of their “Wheels of Soul” summer tours, plus a live recording of Eric Clapton and Duane Allman’s epic collaboration under the Derek & The Dominos moniker, “Layla and Other Assorted Love Songs,” in full at the LOCKN’ music festival with guest Trey Anastasio (Phish), the twelve member band has taken on their most ambitious project yet.

Set to be released in four monthly installments, the TTB’s I Am The Moon album is a 24 song, four album collection, with a vinyl box-set promised in the early fall. The inspiration behind this monumental effort is the original 12th century Persian poem, “Layla and Majnan,” which Clapton adapted as a vehicle to convey his unrequited longing and desire for George Harrison’s then wife, Pattie Boyd. The idea surfaced shortly after the pandemic shutdown, when Mike Mattison, background singer and occasional lead vocalist, suggested that there were other perspectives and ideas in the epic 100-page poem worthy of consideration. Together they wondered what Layla might have felt about all of this unbridled desire coming her way, and the idea that the supposed love of one’s life might be as “unattainable as the moon,” the band imagined it’s own epic work, spread across the four distinguishable phases of our satellite moon: “Crescent; Ascension; The Fall; and Farewell.”

The first collection, I Am The Moon: I. Crescent consists of five songs that exhibit the wide musical spectrum available to this unique recording unit, captured with in the band all together in their home studio, Swamp Raga in Jacksonville, Fla., with Trucks continuing as producer. “Hear Me Dear,” a soulful ballad sung by Tedeschi, opens the collection with a warm, familiar embodiment of the combined unit’s strengths: Trucks’ lovely, emotionally evocative slide soloing, matching the timbre and melody of his partners sweet vocal, Gabe Dixon’s fluid Hammond organ swells, the gentle bed of the horn section, Elizabeth Lea on trombone, Ephraim Owens on trumpet, and Kebbi Williams on sax, and harmony vocalists Mattison, Alicia Chakour, and Mark Rivers.

Mattison sings lead on “Fall In,” with a New Orleans feel in the piano and handclaps, with a full gospel choir feel on the bouncy choruses, as Trucks’ slide, piano swell, and the horn players and singers sashay along in the slow fade. “I Am the Moon” is an acoustic guitar led duet with Gabe Dixon and Tedeschi taking turns on the verses, harmonizing on the light pop chorus. Star-crossed lovers, they sing “I am the moon, you are the sun… you are the star, I am the sun… we have only this mad love to bring,” which is delivered as the horns and music builds to a resolution as they accept what’s necessary to avoid “washing away.”

Tedeschi is back on lead vocal for the more energized soul of “Circles ‘Round the Sun,” then like a train picking up speed the band’s energy rises, fueled by the duel drum attack of Isaac Eady and Tyler Greenwell, Trucks’ guitar never far from the mix, some electric guitar soloing from Tedeschi, and trumpet, and sax offer blasts of jazzy inspiration, until a spoken word closes out the track by St. EOM. Edward Owens Martin was the creative, outsider artist who founded the Pasaquan sculpture park in Georgia, that shows up in the accompanying film “I Am The Moon: The Film.” At the park, now recognized on the National Register of Historic Places,” Martin drew on influences from indigenous communities in Africa, pre-Columbian Mexico, and Native America, fusing cultural images, religious symbols and designs into six sizable structures, mandala murals, and over 900 feet of elaborately painted masonry walls.

This first of four albums closes with the 12 minute instrumental, “Pasaquan,” which is named for that park and Martin’s philosophy, but Allman fans will recognize the song’s structural familiarity to epic live recordings of “In Memory of Elizabeth Reed,” the more pop oriented “Jessica,” and the exhaustive “Mountain Jam.” Trucks lengthy tenure in the ABB alongside fellow guitarist Warren Haynes suggests his familiarity with this jam band standard approach. It is his artful playing and the interaction of these seasoned players that brings this new piece up to those majestic standards. His slide guitar gently establishes the tone, but then the twin drummers pick up the tempo and push Trucks to soloing heights, where he proves that the accolades for his playing prowess are far from hype. There’s a fun jazzy section where the drummers take it down to a sizzle for Gabe Dixon’s organ solo, where he taps into Gregg Allman’s spirit and lets that Leslie cabinet spin. The drummers take a twin solo break that builds up to a large rumble, before Trucks and Dixon and bassist Brandon Boone find their way back in around some harmonics on Trucks’ SG guitar, and then the full entourage is off and running to the song’s climax. And that’s some hot guitar playing there, friends.

Tedeschi Trucks Band have found a way to gracefully accept the mantle as the carriers of the Allman Brothers Band flame, without losing themselves in the meantime. Here on the first of four installments due this summer, they both embrace that legacy, and highlight the other strengths that arise from Tedeschi’s vocal strength, and this talented, amazingly versatile collective. The strength of Moon: I. Crescent surely raises expectations for what is likely to follow, perhaps a career defining effort.