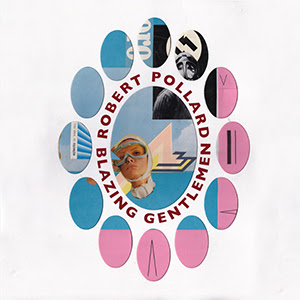 Fire Note Says: Pollard brings the rock on his second solo record in 2013 – Blazing Gentlemen.
Album Review: Did you think you could close out 2013 without hearing from Robert Pollard one last time? Hell no! As he says, “writer’s block is for pussies!” Pollard’s new solo outing, Blazing Gentlemen, officially hits shelves next week and it is another example that Pollard has no intention of slowing down. In fact, this will be the eighth year in a row that Pollard has released two solo records in the same year. Also, when combined with the earlier and excellent Honey Locust Honky Tonk (2013), this combo could be his best one-two punch yet.
I know that is a strong statement but the strength of Honey Locust was no fluke and Blazing Gentlemen picks back up were it left off with its well thought out lyrics, memorable hooks and even bigger “rock” songs. Opening track, “Magic Man Hype” explodes out of the gate with pounding drums and intense guitar work as Pollard sings out “This is the magic man hype!” This track sets the tone as Blazing Gentlemen from the beginning proves to be the rowdier companion to Honey Locust. Some of this comes from Pollard’s current writing process that finds him collecting phrases and titles from his surroundings, such as bits of overheard conversation or misheard movie dialogue. These pieces become lyrics and then Pollard writes a melody for each one. Presto – Pollard magic as this process brings great rewards here like on the catchy “My Museum Needs An Elevator” as the title becomes a consistent soaring chorus or the hum along “ba ba ba bas” that keep a foot tapping pace on the 1:34 “Tea People.” 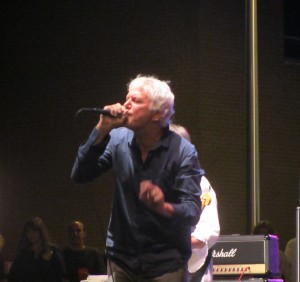 Pollard has said he’s “finally figured out how to write a song after 55 years” which is a little bit of an exaggeration of course but you can hear his total confidence in Blazing’s 16 tracks. It is the same energy that made Honey Locust so good and these tracks not only are solid in their current rock format but would sound just as great if Bob stripped them down. An example here is the 57 second “Piccadilly Man” that is slower but still retains the album’s vibrancy. That differentiates his solo work from the newer GBV material, Circus Devils or several other of Pollard’s projects because they stay closer to their respective styles.
There is plenty to like on Blazing Gentlemen. The rocking title track has a building power conclusion, “Return Of The Drums” has a sinister groove that is hard to forget, singing along “oh oh oh” with “Tonight’s The Rodeo” and the just over a minute, “This Place Has Everything” could easily become one of my favorite solo deep cuts with its repeated passionate final lines “This place has everything, It’s unbelievable…, Desire to walk in dreams with everything.”
Blazing Gentlemen, like all Pollard albums, has its own flavor and some may prefer its bigger rock moments when comparing it to Honey Locust. Personally, Honey Locust hits a sweet spot for me as “I Killed A Man Who Looks Like You” is one of the best penned tracks in his solo catalog. With that said, Blazing Gentlemen is a terrific record and easily falls into my top 10 solo Pollard albums so make sure to celebrate Christmas early and pick this up!
Key Tracks: “Return Of The Drums”, “My Museum Needs An Elevator”, “Tonight’s The Rodeo”
Artists With Similar Fire: Bob Mould / Elvis Costello / Cheap Trick