Fire Note Says: Murder By Death not only deliver the goods on their sixth full length, Bitter Drink, Bitter Moon, but have also released one of the best albums in 2012!
Album Review: I love it when an album takes hold of me from the very first track and never lets go. This is the experience I had listening to Murder By Death’s new sixth full length Bitter Drink, Bitter Moon.
Right from the hush style of the very short opening track, “My Hill”, the listener gets primed as the song’s instruments build near the end and make a seamless transition into the piano playing that kicks off “Lost River”. Singer Adam Turla has a unique voice which sounds like a combination of The National’s Matt Berninger and the legend Johnny Cash. That description alone should pull new listeners into this record as Turla’s baritone sings “I know a place where a body can hide” and sets the tone of this cinematic album that is only just getting revved up. Next track “Straight At The Sun” continues the building intensity as it is a full out rock song that once again highlights the band’s musical tightness and captures the moment with a stellar explosion of out of control cello and the song’s closing line “It’s a dark road when you walk it alone and it gets this cold.” 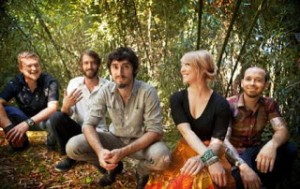 You might think Bitter Drink, Bitter Moon will settle down soon but it just doesn’t even with the slower emotion on the following “No Oath, No Spill” which is still before you hit one of the catchiest tracks the band has released with the rollicking “I Came Around.” It is an instant highlight on the album with its quick pace and soaring chorus that will almost make you hit repeat immediately. After the excellent next track “Hard Road” you won’t believe that you have only heard half of Bitter Drink, Bitter Moon and should be excited as the next half contains its own surprises.
“The Curse Of Elkhart” has several mariachi undertones that boost the song to next level as its festive delivery is a fresh avenue for Murder By Death. “Go To The Light” is another track on the record that finds the band battling darkness and struggling to get out without being smothered by letting in just enough light to survive as Turla plainly states “I fight and I fight just to keep the spark alive.” Closer “Ghost Fields” reprises some of the same chords from the earlier “Lost River” and is the perfect finale to a great album as Turla tries to convince you that he is not an eloquent man but as this song crescendos upward and rides off into the sunset you just know he was totally lying as Murder By Death has released one of their most articulate and powerful records to date!
Key Tracks: “Lost River”, “I Came Around”, “The Curse Of Elkhart”
Artists With Similar Fire: The National / Nick Cave & The Bad Seeds / Johnny Cash
Murder By Death: Good Morning, Magpie [Fire Note Review 5/4/10]
Murder By Death Website
Murder By Death Facebook
Bloodshot Records
-Reviewed by Christopher Anthony