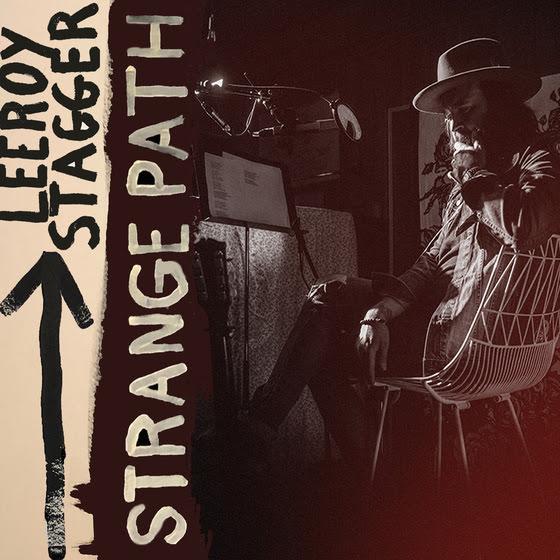 Who: Alberta musician Leeroy Stagger has a 17-year singer songwriter resume, two kids, a home in Lethbridge and a world class recording studio to go with it.
Sound: Typically, Leeroy Stagger offers a folk-Americana delivery but here he brings a much more defined rock that is more comparable to the newest Sturgill Simpson, or in line with Bruce Springsteen, T. Rex and Wilco.
TFN Final Take: Leeroy Stagger has been on TFN radar for some time now and Strange Path represents another solid collection of Americana rock that has a very Bruce Springsteen meets Wilco vibe to it. In fact, Strange Path offers one of the biggest and fullest sounding albums to date in Stagger’s long career. The sound can be attributed to surrounding himself with some of the best players in the business, including drummer Pete Thomas (Elvis Costello and the Attractions, Elliot Smith, Los Lobos), longtime collaborator Tyson Maiko, Paul Rigby (Neko Case, Garth Hudson, Jakob Dylan), Ryland Moranz and Michael Ayotte. The album then was mixed by five-time Grammy winner Ryan Freeland (Ray LaMontagne, Bonnie Raitt, Rodney Crowell). All of this attention to production works as Strange Path sounds polished but still retains Leeroy’s raw energy which is a consistent staple on each of his releases.
Even though Stagger is categorized as a folk Americana player, Strange Path is filled with a radio friendly rock sound. “Strange Attractor” is a highlight of that genre with its bigger than life guitar solo and sing along chorus that you can just hear a crowd chiming in on. It also has a slight new wave undertone that then glams up like a big T Rex track which really works on the album. Another big rocker is “Jesus + Buddha” that is a foot stomping fun ride as Stagger gives you plenty of creative wordplay lyrics to digest. Elsewhere, Leeroy shows off his singer/songwriter skills on the catchy and heartfelt opener “Mother.” This mid-tempo number is in Stagger’s wheelhouse and others like “Nobody Alive (Gets Out Of Here)” is where you will hear Leeroy’s similar sounding voice to that of Wilco’s Jeff Tweedy.
Strange Path is actually the perfect introduction to Leeroy Stagger if the name is new to you. It has eleven well-crafted songs that play great loud or with headphones. For longtime fans, this turn up the amps and radio boogie jamming might be surprising at first but you don’t need to dig too deep to find the Leeroy you follow. Strange Path is another solid record in his catalog and honestly one of his best.
Leeroy Stagger Review History: Truth Be Sold (2013), Easton Stagger Phillips: Resolution Road (2014)
Leeroy Stagger Website
Leeroy Stagger Facebook
True North Records
– Reviewed by Christopher Anthony