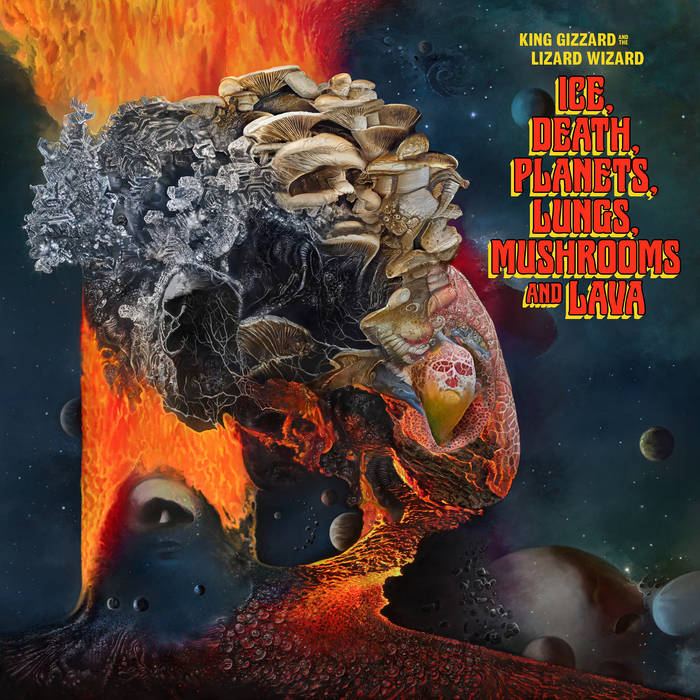 This is not the only King Gizzard review you’ll read on TFN in October. The Australian psych-prog song factory has announced three new albums coming out in quick succession this month, and Ice, Death, Planets, Lungs, Mushrooms and Lava is just the first of these to emerge from the Gizzverse. Clocking in at seven tracks and just over an hour, it’s also the longest of the three, and will be spread over four sides when it comes to vinyl. It’s described by the band as “built around the 7 Greek modes,” “collaborative” and “jammy,” and even though my knowledge of music theory is too rusty to comment on that first claim, the songs definitely reflect the latter two.

Over the course of the album, you get the sense that these songs were built up from the band getting together in the same room and seeing what happened. With some bands that might be a recipe for disaster, but with a group of musicians as talented as King Gizzard you know the results will be interesting at the very least. Even though each track does have a “jam session” feel, these songs actually go places, exploring different nooks and crannies of the main riff or chord progression before returning back to the collective groove.

Each of the seven tracks has its own unique feel, and while the shortest one is over six minutes long, they don’t overstay their welcome. “Mycelium” kicks things off with a groovy psychedelic vibe, interweaving guitar lines and organ backed by a bouncy beat—imagine one of the peppier tracks from Butterfly 3000, but based around dueling guitars and stretched out to over seven minutes, and you get the basic idea. From there each track touches on various styles where improvisation and groove are key: “Ice V” brings in some funk and jazz, followed up by “Magma,” a track that almost sounds like Jerry Garcia joined a Bollywood psych-funk outfit. “Lava” begins with a free-jazz freak-out before slowing way down, with piano, flute, and spacey guitars floating above a tribal beat. “Hell’s Itch,” a monster of a track at over thirteen minutes, is King Gizz at their prog-pop best, marrying a catchy melody to a complex, jazzy arrangement incorporating more flutes, sax, interweaving guitar, bass, and keys, all supported by some of the record’s most kinetic drum fills. “Iron Lung” starts off in a more laid-back mood and features some co-lead vocals by Ambrose Kenny-Smith, before taking off and morphing into a high-energy psych-soul workout, and “Gliese 710” closes out the record with what might be its darkest track, a minor-key jazz fusion experiment with squawking sax, organ stabs, sludgy guitar solos and melancholy piano chords.

IDPLML is not the album to give someone who wants to check out King Gizzard for the first time (unless that person is already into the more experimental corners of psych, prog, or jazz fusion). However, if you’re already a fan of King Gizzard’s ever-shifting nature, or can get down with some extended jams, you’ll find a lot to like here. We’ll have to wait to see how this album compares to the other two on the way, but if King Gizzard’s track record is anything to go by, they won’t sound a whole lot like IDPLML.

The Cult: Under The Midnight Sun [Album Review]