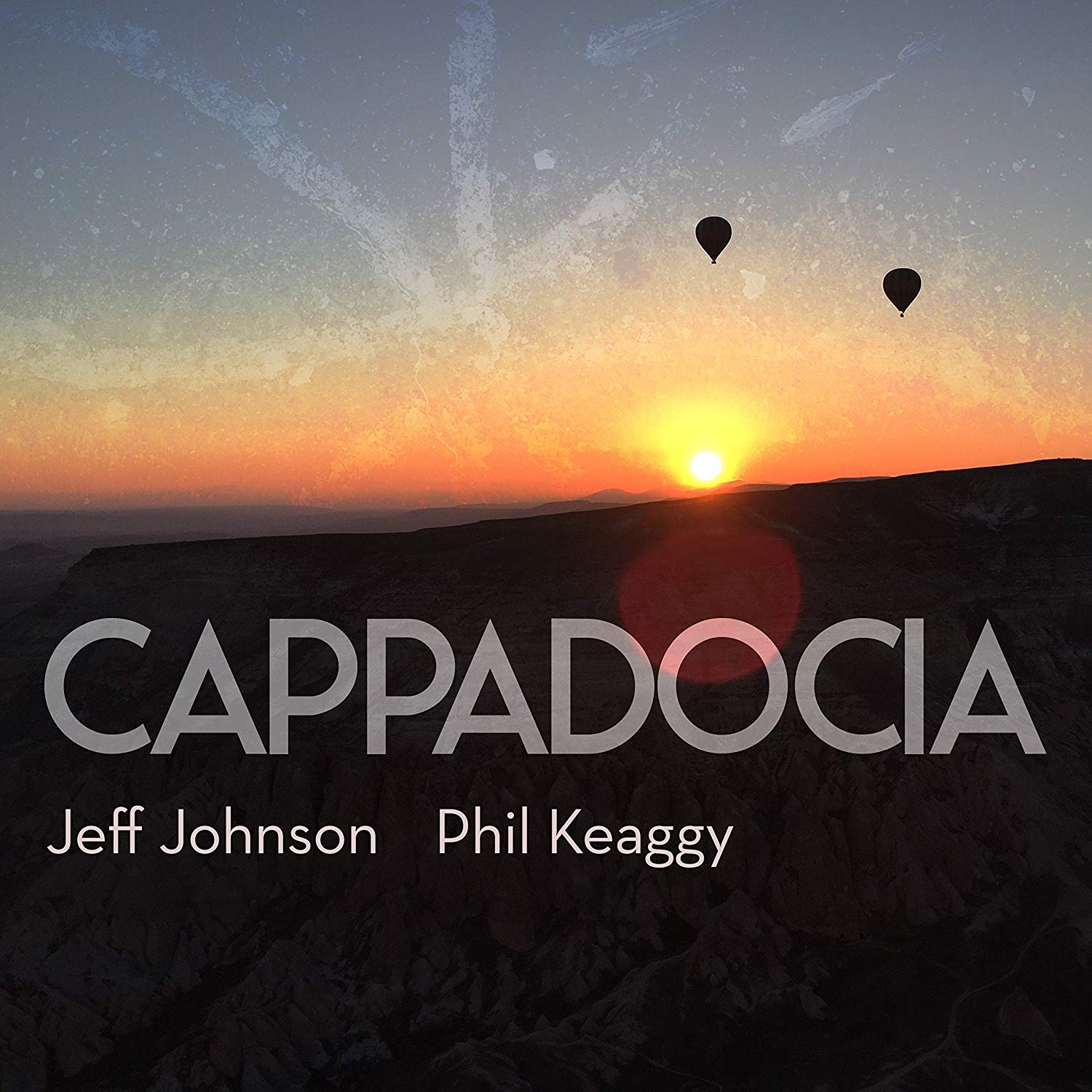 Fire Note Says: Johnson’s keyboards and Keaggy’s guitars find inspiration in the dramatic terrain and musical palette of the Middle East, resulting in mysterious, lush instrumentals.
Album Review: Last year, new age instrumental artist Jeff Johnson released another of his wonderful collaborations with Irish flutist Brian Dunning, “Eirlandia,” another lush project with lush Celtic and old world influences, that was meant to serve as a musical soundtrack to a fantasy novel series of the same name by author Stephen R. Lawhead. This time out, Johnson has again collaborated with guitarist Phil Keaggy, on a work that feels substantially more arty and intense than their two previous efforts, 2009’s “Frio Suite” and 2012’s “WaterSky.”
Keaggy is a virtuoso, a guitarist’s guitar hero, whose perhaps less well known broadly because most of his recorded work has been within the musical subculture of the contemporary Christian world. In the early 70’s, Keaggy was part of the Glass Harp, a power-trio out of Youngstown, OH, drawing strong crowds, and recorded 3 albums by 1972, with many expecting they would quite naturally follow another area band, The James Gang with Joe Walsh, to national stardom. But in 1973, he recorded an early Jesus music album classic, “What A Day,” playing all of the instruments, before he left his band and joined a religious commune near Ithaca, NY. From there, Keaggy released more albums, including his 1978 instrumental tour de force, “The Master & The Musician.” Over the intervening decades, Keaggy has done some remarkable work even within the confines of that conservative marketplace, especially noteworthy are his live concert albums recorded in collaboration with 2nd Chapter of Acts, “How the West Was One,” a Beatlesque tribute “Phil Keaggy and Sunday’s Child” with Randy Stonehill providing a John Lennon to Keaggy’s McCartney, and a blues rock highwater mark, “Crimson & Blue,” along with innumerable instrumental albums that will appeal to guitar players and fans.
This third collaboration between Johnson and Keaggy, life those before it, is inspired by a piece of geography. “Frio Suite” grew from a retreat experience along the Frio River in Texas, and the paintings of Kathy Hastings. Three years later, “WaterSky,” returned to the Frio, and a canoe voyage floating in the bubbling water of the river canyon. Appropriately enough, Cappadocia looks east, to a majestic place and time in the world’s history, the ancient world of Asia Minor, the eastern mountainous region of Turkey, north of Syria, where the rocky terrain is an UNESCO World Heritage Site, known for its caves and a rock-cut temple in the side of a mountain. In the Fourth Century BCE, early Christian communities prospered and thought was nurtured by the likes of Gregory of Nyssa, who is quoted on the album cover saying that someone “standing up close to a wellspring… will admire that endless gush from within spilling out… The same applies to the one who looks to this divine and infinite beauty… (It) is always newer and more paradoxical than what his sight had already grasped.”
It is that sense of the ineffable, what Gregory described as “the revelations he awaits will always be more magnificent and more divine than that which he had already seen,” that Johnson and Keaggy seek to give expression in their collaborative compositions. As a listener, I’m always drawn more to the colorful runs of notes from Keaggy’s acoustic and electric guitars, on the title track and elsewhere, but it’s Johnson’s textured keyboard synths, and sensitive piano playing that often sets the stage. Smart percussion gives these longer pieces a sense of drama, and Keaggy turns to a cumbus, a Turkish instrument that sounds like the Middle Eastern instrument, the oud, and resonates like the American banjo, to give some of these instrumental tracks an Eastern European feel.
Relying almost entirely on keyboards and Keaggy’s guitars, these compositions manage to sound orchestral at points, but maintain a level of intimacy and connection. I had the pleasure of stumbling some pre-release airings of several tracks on Echoes, the late-night public radio music show that tends toward more ambient, new age sounds, and it was a perfect fit, at times like quieter progressive rock on those places where the percussion and Johnson and Keaggy are focused on the more dramatic terrain of their musical palette, but much of the time they provide a lovely instrumental expression of ideas and emotions not easily expressed. It’s another solid outing, highly musical, at times a mysterious, satisfying listen.
Key Tracks: “Cappadocia” / “Quo Vadis (Where Are You Going?)” / “That Which Is Hidden”
Artists With Similar Fire: Hammock / Ric Hordinski / Brian Eno
Ark Music
– Reviewed by Brian Q. Newcomb