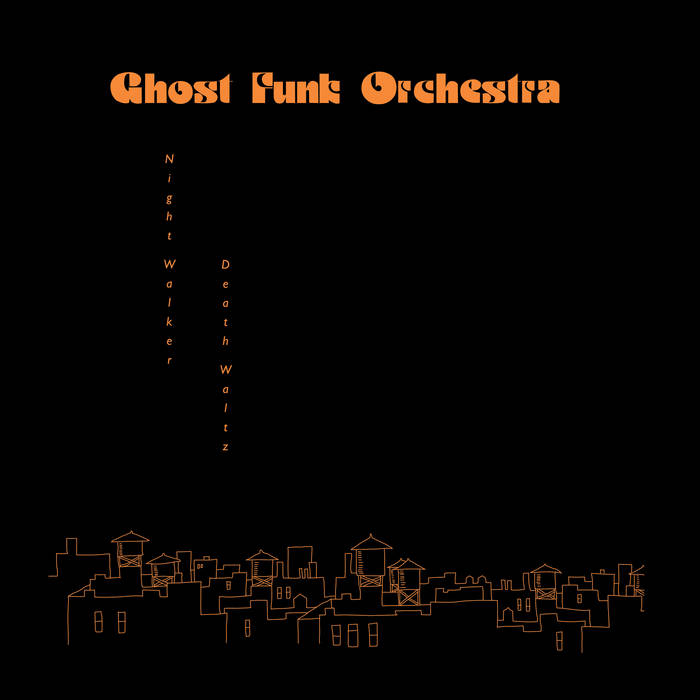 Before they became firm Fire Note favorites with their first two full-length albums (2019’s Song For Paul and 2020’s Ode to Escapism), and before they became a real-life 10-piece outfit blowing audiences out of the water with their live performances, Ghost Funk Orchestra wasn’t really a band. Instead, it was the name multi-instrumentalist Seth Applebaum gave to his multitracking and production experiments, fusing his love of gritty beats, funky psych-soul guitars, Latin percussion, and female vocalists (often singing in Spanish), immersing it all in a sea of reverb. Those early sonic sketches were collected on various digital and cassette releases, but have never been widely available until now, thanks to Karma Chief/Colemine Records.

The first side features the Night Walker EP, a nine-track song cycle that should feel instantly familiar to fans of GFO. After a short instrumental introduction that establishes one of the EP’s recurring motifs, things kick into high gear with “Brownout,” an energetic track with prominent Spanish-language vocals, Latin-funk hand percussion, and break beat drums fills. The next few tracks lean into GFO’s psychedelic side, with the title track laying the guitar and vocal effects on thick to create a moody, appropriately late-night feel. “Demon Demon” is something of an outlier, featuring a spoken-word warning to beware of the “demons” that come out at night, but that slight detour leads right into the first side’s best track, “Blood Moon,” a song that foreshadows the best elements that would later appear on the band’s full-length efforts. After a short interlude are “Franklin Ave.” and “A Moment of Clarity,” two slower tracks that act as a subdued coda and end side one on a slightly unsettling note.

Side two contains the Death Waltz EP, a slightly shorter but no less impressive six-song collection that has many of the same signature elements as Night Walker, but takes them in more experimental directions. The title track opens the proceedings with quiet electric piano chords, adding layers of guitar and percussion before bringing in some spoken word lyrics about the “dance of the dead” and heading into noisy psych territory. “Brain Fog,” ironically released prior to the pandemic, brings in some jazz and prog influences, its knotty guitar lines, multi-part vocal harmonies, and 5/4 time signature adding layers of complexity to the established GFO sound. “The Haunt Pt. 2” continues the experimentation, with ghostly guitars emerging out of the sonic mist, punctuated with odd echo-saturated noises. “Lost Soul” brings back the jazz elements, with sax and flute adding new textures behind more spoken word lyrics, while “Boneyard Blues” closes out side two with a reprise of the Night Walker sound, adding fuzzy garage rock riffs that give the track a sinister feel.

Although it doesn’t quite hit the highs of Song For Paul or Ode To Escapism, Night Walker / Death Waltz is nevertheless a fascinating peek into the origins of Ghost Funk Orchestra. It shows elements of their sound they’d later develop to even better effect, along with some detours and musical “what if” moments that suggest alternate directions the project could have taken. While some archival releases are only worth listening to as historical curiosities or glimpses into the creative process, Night Walker / Death Waltz hits those marks while working as an album on its own terms. It may not be the best place to start with Ghost Funk Orchestra, but once you’ve fallen under their spell you’ll definitely want to add it to the collection.