Ezra Furman: All Of Us Flames [Album Review] 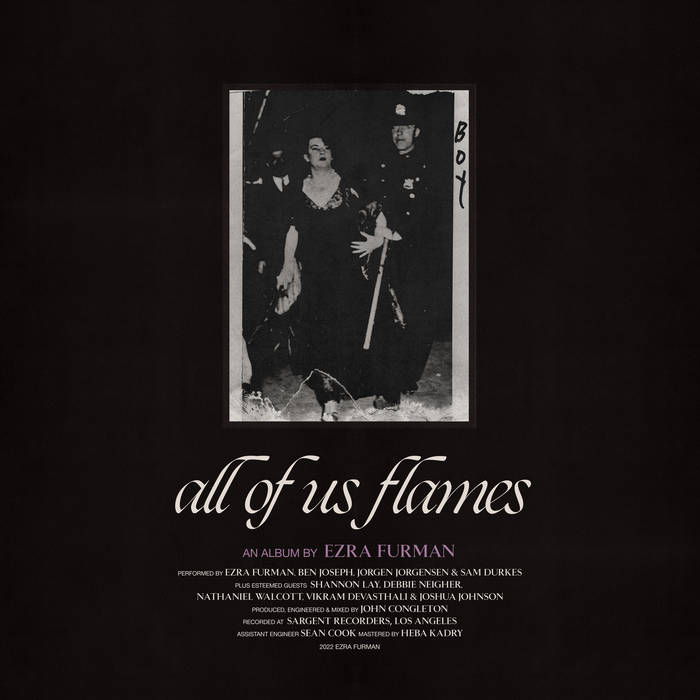 Singer/songwriter Ezra Furman draws the title of her 7th album from the song “Book of Our Names,” a declaration from the marginalized trans community where she insists “the names will be our real ones that are ours/Not the ones given us by the enemy powers.” Given the disposable nature of their fragile existence in the current hostile environment, Furman insists “none of us missing, none exactly the same/None of us ashes, all of us flames.” As the third of a trilogy that kicked off with Transangelic Exodus in ’18, and continued through Twelve Nudes in ’19, All of Us Flames is about finding one’s tribe, learning to trust others, and seeking to heal in the face of seemingly insurmountable challenges that life presents to some.

In the first single, “Forever in Sunset” echoes the epic musical moves of Springsteen to express the experience of someone living constantly in “survival mode.” “Point Me Toward the Real” tells the story of someone picked up on the first day of release from a psychiatric hospital who knows that the only path to healing will come with facing reality, with lush horn arrangements that punctuate the serious resolve necessary to survive and recover. “Ally Sheedy in the Breakfast Club,” as the title suggests, finds the singer identifying that “part of me was swimming there beneath the water in your eyes” of the film’s quintessential outsider. In “Lilac and Black,” she imagines getting her “queer girl gang” together in attack mode against the cis world where they “question if we exist.”

While the particulars of Furman’s life and story are rooted in her experience growing up Jewish as a transwoman, the beauty of art is that she taps the universal feelings of insecurity and a “broken heart” common to many. That Furman tells her story with occasional nods toward old school rock & roll, with lots of great girl group harmonies in the mix – as in “Dressed in Black” – makes the storytelling easy to connect with and all the more compelling. The underlying spirituality sprinkled throughout is partly a survivor holding on to a Higher Power and remnants of her Jewish upbringing, but most can relate to her prayer that the “Lord, be close to the broken-hearted,” in what serves as the album’s benediction, “Come Close.” In “Poor Girl A Long Way From Heaven,” Furman may “keep a lone candle burning upon my little windowsill,” but she imagines meeting up with all those like her in the “Temple of Broken Dreams.”

In these 13 strong, relatable tracks, Ezra Furman exhibits a rare courage, a defiant spirit, and an artfully expressed vulnerability in music that’s dramatic enough to carry such heavy freight, but never sloppy or sentimental. This one’s for anyone who’s struggled to fit in and failed, who can empathize with those who’ve been marginalized, and “All of Us Flames.”

The Afghan Whigs – “A Line Of Shots” [Video]