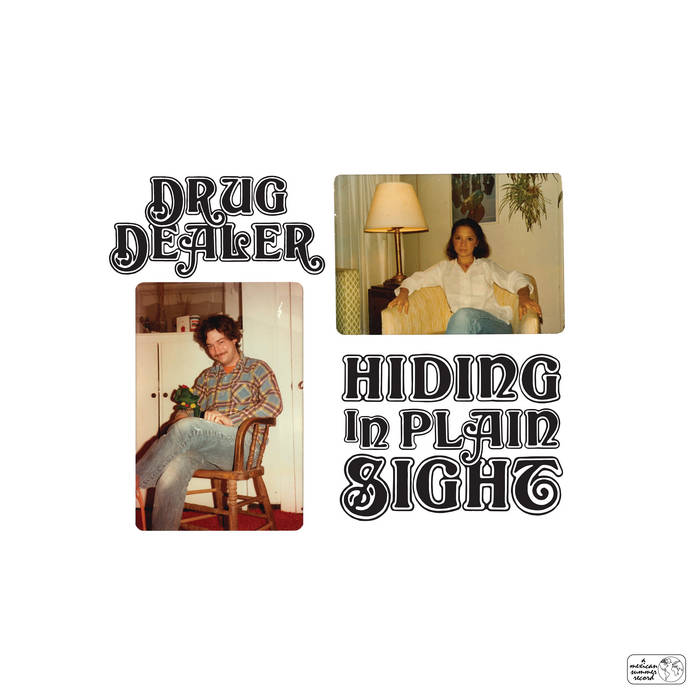 Michael Collins has always been an interesting character in music since the early 2010’s. After a legal battle over the name Run DMT he emerged in 2013 under the moniker Salvia Plath with the 60’s psych bent of The Bardo Story. Well, with band names like that why don’t you just say screw it and name yourself Drugdealer, that’s exactly what Collins did. The new band was born and are now releasing their third album, Hiding In Plain Sight. With debut The End of Comedy (2016) and Raw Honey (2019) Collins and co. have toyed a bit with psych but, it seemed the group’s main focus has been with breezy R&B with a proto-indie-yacht rock. If St. Vincent went back to the 70’s to record Daddy’s Home Drugdealer has always been there and never left.

Hiding In Plain Sight is Drugdealer’s most focused work to date. The End of Comedy and Raw Honey, has little diversions in the form of breaks/introspections such as rainstorms, entering a car and starting it, typewriters, busy streets, and bell bings and bongs. The albums have a slight short film feel to them. Hiding In Plain Sight has none of that and it flows better for it. “Madison” immediately starts you in a sway with its gentle keys. The sullen pedal steel emphasizes the song’s lost love but, the choir not only remains hopeful but catchy too. Fire Note favorite, Tim Presley, of White Fence shows us on “Baby” what it would sound like if a clean-cut, starry-eyed sock hopping boy band of the 60’s would sound like today. The choral horns also blare loud and proud as if you’re the band leader of your own parade. “Someone to Love” looms heavy with its beginning smoky room, R&B grooves. An assailing drumbeat keeps pace consistent while the track is elevated by horns and sultry vocal harmonies.

That is truly Drugdealer’s secret weapon on this album. The band starts with a simple and catchy groove that’s then elevated by electric sitar, sax, vocal harmony, Rhodes piano, and honky-tonk guitars. Song of the album, “Pictures of You ” features Kate Bollinger and shows how a simple variation of notes and chords can be enhanced through flourish and soul. “Valentine” cruises out the speakers to get your hips shaking and your head bobbing in a cute ode to his girlfriend, Sasha Winn. The final track throws a real curveball. Leaning heavy into the funk, “Posse Cut” is a bold duo showcase that oozes fun showing each vocalist in their comfort zone. The song rolls out on “Fly Like an Eagle” keys that make for a satisfying end.

Drugdealer’s Hiding In Plain Sight is an album that almost wasn’t. It took Collins to meet artist and composer Annette Peacock to realize he had more to give. This album is the full realization of what Collins wanted to accomplish with previous albums. To take a Ryley Walker title, these are golden sings that have been sung. It was my regret to not review The End of Comedy or Raw Honey for the site. Now that we have Hiding In Plain Sight on the books, do yourself a favor. Start here and then work yourself backward through the odyssey that is Drugdealer. Like a smooth scotch or a warm summer breeze this one just connects.