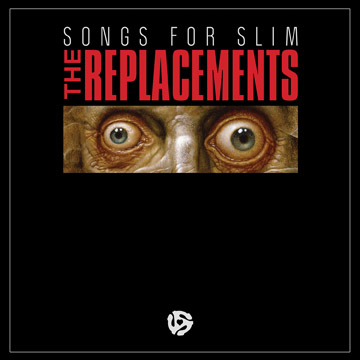 New West Records is proud to announce Songs For Slim, a newly recorded EP from The Replacements. The proceeds of this limited edition 10″, the first new recording from The Replacements since 1990’s All Shook Down, will benefit friend and former Replacements guitarist, solo artist and Minneapolis post-punk scene veteran Slim Dunlap, who has been partially paralyzed since suffering a massive right-brain stroke last February.
250 numbered copies of the strictly limited edition 180-gram vinyl EP will be available via auction from January 15 – January 25th. Additional information about the auction can be found at: HERE.
The limited edition package, available via the auction, will be signed by Paul Westerberg, Tommy Stinson and Chris Mars and includes four glossy prints of never-before-seen band photos, a collectors’ poster of Dunlap, a print of the Chris Mars cover painting which appears on the inner sleeve and a digital download card for the complete EP.
The EP will then be available worldwide for purchase digitally on March 5, 2013. A standard 12” edition of the record, also with a download card, will be scheduled for release in April via New West Records.
SONGS FOR SLIM TRACKLISTING
Side A:
1. Busted Up (Slim Dunlap)
2. Radio Hook Word Hit (Slim Dunlap)
Side B:
1. I’m Not Sayin’ (Gordon Lightfoot)
2. Lost Highway (Leon Payne)
3. Everything’s Coming Up Roses (Stephen Sondheim/Jule Styne)