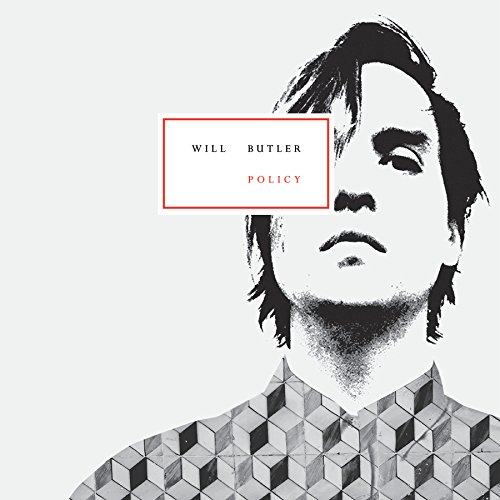 Fire Note Says: The solo debut from Arcade Fire’s spunky multi-instrumentalist Will Butler.
Album Review: Who is Will Butler you ask? Well, he is a multi-instrumentalist from the band Arcade Fire and also the younger brother of lead singer Win. I will admit that Will is not the first person out of this group I thought would venture into the solo territory but after one spin through Policy it makes more sense as the record captures both his honest looks and out of nowhere spastic stage antics.
Like any solo breakout from your super popular day job, Butler attempts to put some space between the two but interestingly enough, Policy feels like an early era Arcade Fire record. You might guess that Will sounds pretty close to Win in the vocal category and the fresh, at times schizoid, approach to Policy has the spirit and spunk of those early Fire demos and live shows. That of course is a recipe for success and Will pulls it off for most of the record.

The more straight forward rockers on this album are Butler’s sweet spot. The songs are raw, the lyrics fly out with authority and the tracks just provide a good time. The material is less statement based, compared to Arcade Fire, so there is an immediate looser vibe going on when in the opening track Win asks/pleads “are you going to take my side?” with a reckless Violent Femmes approach that will have you immediately saying yes! On the punkier new wave rush of “What I Want,” you get hit with some of Win’s catchy wordplay lyrics that stick with you as he sings, “Tell me what you want babe and I will get it / though it might take 3-5 business days, maybe longer / I forget cause my head’s in a bit of a haze.” His fun approach to this track is infectious. “Witness” closes the record with a big party that rollicks through its lines with sprawling backup vocals and piano that will get you reaching for the repeat button.
Like his stage personality, Policy does jump around a bit and those moments keep the album somewhat unstable at times. The Devo like “Anna” is a bit too cute for its own good and some of the slower spoken word type songs like “Sing To Me” and “Finish What I Started” just seems to hold Butler back. Even with those few misdirections, Will Butler not only makes Policy likable but cool. It could have been a solo debut nightmare but Butler’s energy never lets the record down. Everything that makes his presence on stage with Arcade Fire crucial, shows up here on Policy and it not only makes this record a success but paves a possible bright future for Will Butler’s name by itself on the marquee.
Key Tracks: “Take My Side” / “What I Want” / “Witness”
Artists With Similar Fire: Violent Femmes / Talking Heads / Jonathan Richman