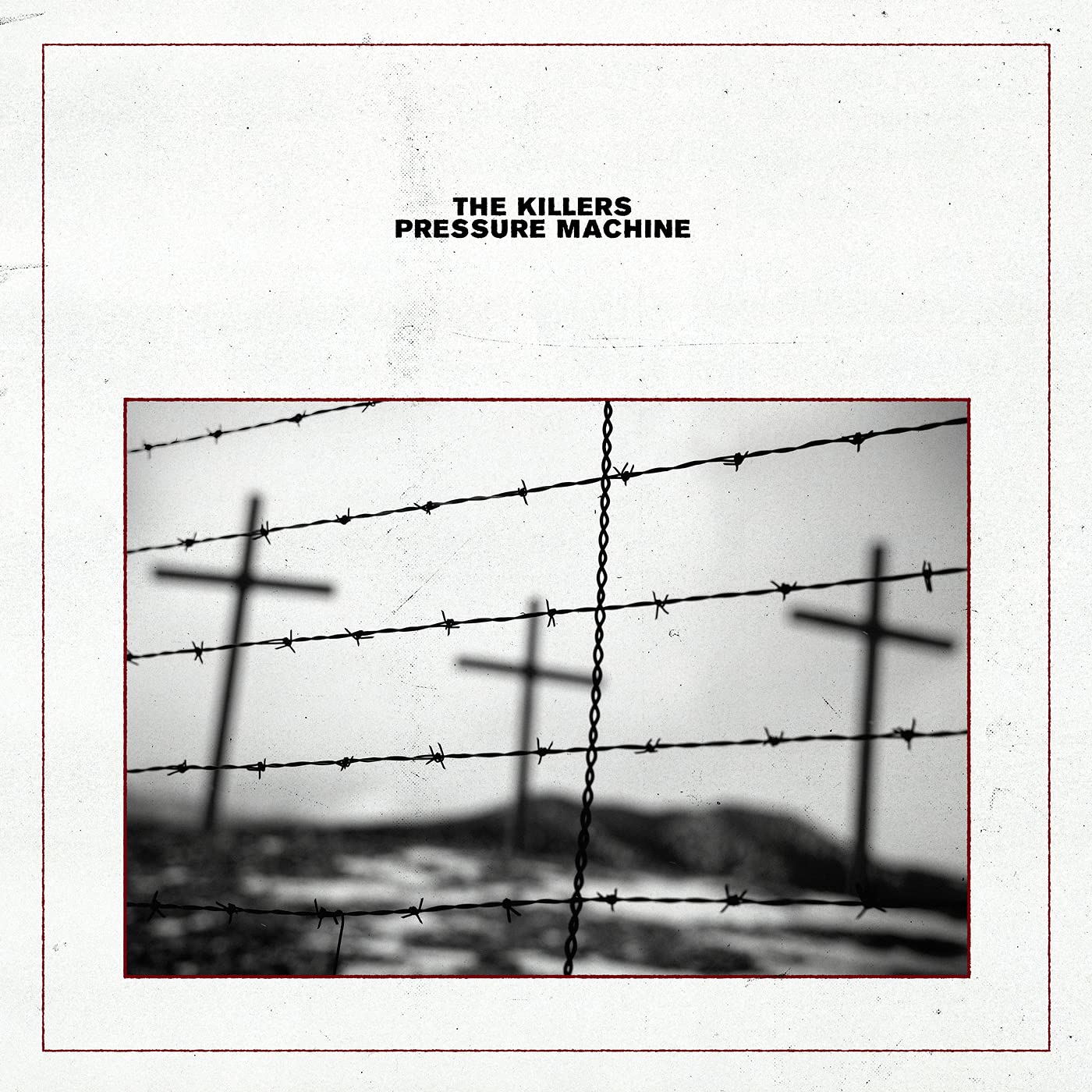 Well-paired back-to-back songs are a constant feature of The Killers’ discography. On their 2004 debut Hot Fuss, the songs “Mr. Brightside” and “Smile Like You Mean It” are united by a very specific bitterness. On Sam’s Town, the urgency of “When You Were Young” tees up the desperation and triumphalism of “Bling (Confessions of a King).” On Wonderful Wonderful, “Rut” and “Life To Come” are in direct conversation with one another—one song written from the perspective of frontman Brandon Flowers’ wife Tana; the other, Flowers’ response.

This is the dichotomous trend that both opens and defines Pressure Machine, The Killers seventh, most mature, and most singular record to date. Directly inspired by Brandon Flowers’ childhood in small town Nephi, Utah, Pressure Machine opens with “West Hills” (a slow-burning epic that builds until it bursts), and “Quiet Town” (an effortlessly catchy pop-country tune). It immediately confronts listeners with an epitomizing dichotomy right off the bat; if neither the power and dread of “West Hills” nor the catchy, warm melancholy of “Quiet Town” hook you, then this album probably isn’t for you.

There’s a dual nature to everything on this uncharacteristically stripped-back collection. While nearly half of the songs retain the urgency and catchiness of The Killers’ typical fare, the other half are quiet, mostly acoustic country songs—and nearly all feature a rootsier arrangement than 2020’s thundering, synth-driven Imploding the Mirage. While Flowers spends these eleven songs painting a picture of a quaint and quiet hometown full of “good people who lean on Jesus, they’re quick to forgive” on one hand, he casts the specter of death over almost every song on the other. Whether it’s wrought by opioids, a train, a vengeful lover, or just by the day-to-day grind, death is just as much a part of this record as Flowers’ pleasant paens to “Coca-Cola grins” and “the first autumn whisper mid-September brings.”

Despite this emotional balancing act, there is one undeniable theme that quietly permeates the entire record, even when not mentioned explicitly. And that is the ubiquity and promise of the wise and loving God of Brandon Flowers’ personal faith.

Flowers has never been shy about his Mormonism’s impact on his artistry. He talks openly about his faith’s influence on his writing; he once debated religion with Richard Dawkins, and (resultantly) declared that “the world is against the Christian man.”

Pressure Machine puts God—or, more specifically, Brandon Flowers’ conception of and relationship with God—as close to the heart of a Killers record as God’s been yet. And that’s really saying something, as Flowers has laced The Killers discography with subtle yet undeniable religious themes more and more as he’s grown older.

According to Flowers, Imploding the Mirage was mostly about “two people becoming one and two people becoming eternal” in the afterlife in accordance with Mormon teachings. And 2017’s Wonderful Wonderful is rife with religious imagery. It opens with a song written from the perspective of God, during which God gives a “motherless child”—likely Flowers’s wife, Tana—the new name (drum roll please) Wonderful Wonderful. The record even features Woody Harelson reading directly from the Book of Matthew.

But they’re definitely a rock band with a Christian lead singer, that much is for certain. And while Pressure Machine isn’t a record about God, God is everywhere on it. Flowers is a writer and a believer who takes God seriously enough to let Him show up in some way in nearly every song, unannounced and sometimes even unacknowledged. This, in my opinion, creates some of the most stirring, evocative, and genuinely moving songcraft of Flowers’ career to date.

The God of Brandon Flowers’ songwriting and personal faith can’t be found only in a passage or a sermon, but in Eastern Bluebells and Painted Cups and smoke billowing from a Sunday train. Flowers’ writing makes it clear that he sees God in everything, everywhere; God is commonplace—and that most casual listeners won’t be able to tell that Flowers is in near constant conversation with God throughout the record is a testament to just how ubiquitous His presence is in the world of the frontman.

On a personal note, I would be remiss if I did not stop at this point and make it very clear that although I am a lifelong fan of The Killers, this is the first record they have made that I cannot get through without crying. On three particular songs from Imploding the Mirage—”Lightning Fields,” “Running Toward a Place,” and “When Dreams Run Dry”—Flowers began to embrace a kind of direct, plainspoken reverence for the devine’s presence in our lives and our relationships. On Pressure Machine, he is fully consumed by it. Particularly on the two songs that open the record (“West Hills,” “Quiet Town”) and the two that close it (“Pressure Machine;” “The Getting By”), he lets that reverence inspire him to some of the most deeply affecting songwriting of his career.

It has been a nearly twenty year journey for The Killers, and they, at this point, are very much not the band of pseudo-British indie rockers who penned electro-pop hits like “Somebody Told Me” and “Human,” or the towering iconic, choruses of “Mr. Brightside” and “When You Were Young.” As a band, as artists, and as individuals, they’ve been through a lot since the early days of their meteoric rise, and their evolution has made it clear that there’s no going back.

But the contrasts that made them an object of curiosity early on—an ambitious rock-n-roll band from Las Vegas, fronted by a devout, practicing Mormon—have blossomed into rich emotional layers, both in terms of Flowers’ songwriting and the band’s unmatched, sprawling musicality.

In 2004, Brandon Flowers said he wanted The Killers to be “America’s answer to U2.” In terms of The Killers’ music, their spirituality, their legacy, and their enduring ability to fill stadiums around the world, I’d say they’re almost there.

Key Tracks: “West Hills” / “In The Car Outside” / “Another In Another Life”