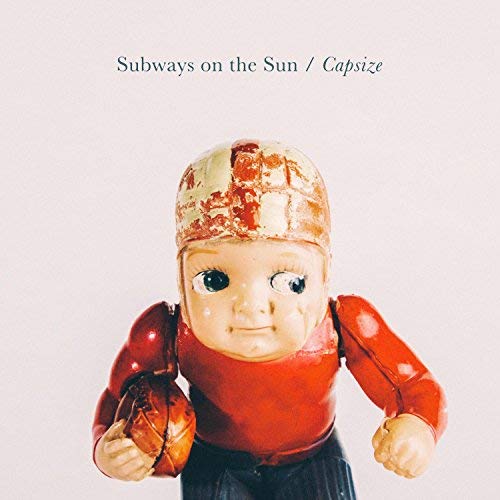 Fire Note Says: Subways On The Sun build on the strengths of their debut album, producing a sophomore effort that’s anything but a slump.
Album Review: A second album is a tricky proposition for a lot of bands. Change direction too much, and you might lose part of the audience you built with the debut. Stick too closely to the first record, though, and you end up with a sophomore slump. It’s a difficult tightrope to cross, but luckily Seattle’s Subways on the Sun have a pretty good sense of balance. After independently releasing their excellent debut The Honeymoon Stagecoach in 2013, Subways on the Sun are back with their second album, Capsize, this time on Seattle’s own Spartan Records.
One of the biggest strengths of The Honeymoon Stagecoach was how the band’s melodic, catchy songwriting was enhanced by the production techniques, and the same thing is true of Capsize. The guitars of Erick Newbill and Lars Katz chime, resonate, or get crunchy depending on what the song demands, and everything is placed just right in the mix. The band weaves a dense audio tapestry, with layers of guitars, keys, and vocals blending just right to produce a full, rich-sounding record. The rhythm section is no slouch either, with bassist Nick Barber providing the sonic glue and veteran drummer Jesse Sprinkle stepping up to provide the backbeat.
The songwriting on Capsize isn’t necessarily better than it was on The Honeymoon Stagecoach, but it matches the quality from the debut while also being more diverse. We get catchy rockers like the phenomenal “Hope You Like Getting Old” and “Works,” along with more subdued, keyboard-heavy tracks like “I’m An Island.” The band often covers multiple moods in the same song; the title track, for example, begins with a relaxed piano-based arrangement before transitioning into a more guitar-heavy chorus, and as the song develops the two bleed over into each other, dovetailing in a really satisfying way. We also get more of Lars Katz’s electronic textures, whether they’re enhancing the guitar tone or being used as an instrument in their own right (see penultimate track “Time’s Not Long”). This is still very much a guitar-heavy indie rock record, though; and that’s a very good thing, since it plays to the band’s strengths. Other highlights include the catchy opening track “Just To Be With You;” the moody, Mew-influenced “Tongues;” and “Know It All,” which features angular, interweaving guitars married to a bouncy lead vocal that feels like something latter-day Travis or Blur might concoct.
By the time things wrap up with stately closer “On Repeat,” we’ve covered a lot of ground, meaning that Capsize might take a few more listens to sink in compared to The Honeymoon Stagecoach. But once they do, it becomes clear that the band has successfully threaded the needle, keeping the elements of their sound that work and building on them by adding fresh ideas and new sounds into the mix. The five-year gap between the debut and Capsize was time well spent—but like any good record, this one makes you hope we don’t have to wait another five years for the next one.
Key Tracks: “I Hope You Like Getting Old” / “Tongues” / “Capsize”
Artists With Similar Fire: Mew/ The Shins / Travis
Subways On The Sun Website
Subways On The Sun Facebook
Spartan Records
-Reviewed by Simon Workman