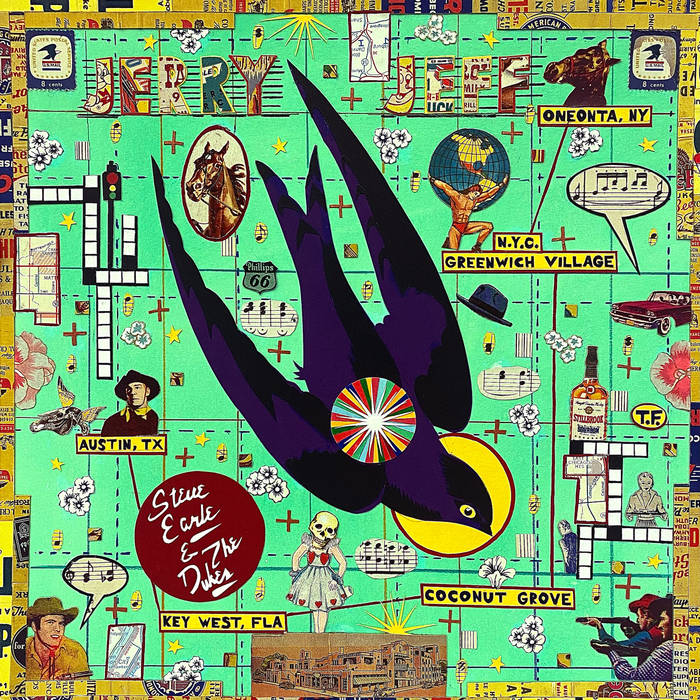 Steve Earle remembers playing the Sand Mountain Coffee House in Houston, TX, when just starting out. He says there was a mural on the club’s back wall with the painted faces of Townes Van Zandt, Guy Clark, and Jerry Jeff Walker; he could see the mural very clearly when he played, he recalls, because hardly anyone was there when he played. In time, Earle met each one of his early heroes, and they became friends and mentors. Van Zandt lived hard and died young at the age of 52 in 1997, and in 2009 Earle and his band recorded a collection of Van Zandt’s most beloved songs, titled appropriately Townes. Clark died in 2016, and in 2019 Earle released an album’s worth of his songs, titled “Guy.” Then, following the tragic death of Earle’s son, Justin Townes Earle, a singer/songwriter and recording artist with a strong catalog of his own, last year Earle delivered J.T., a tribute album of his son’s songs. With the release of Jerry Jeff, a collection of 10 songs by Walker, who died in 2020, Earle writes in the liner notes, “This record completes the set, the work of my first-hand teachers.”

Walker passed in the midst of the pandemic shutdown, so when things loosened up last summer, his wife Susan threw a party for Jerry Jeff’s fans, inviting Earle, Emmylou Harris, Ramblin’ Jack Elliot, and Jimmy Buffett to come play and sing some of Walker’s songs. Of course, Walker’s name is closest associated to his biggest hit song, “Mr. Bojangles,” which was covered by everybody from the Nitty Gritty Dirt Band to Bob Dylan to Sammy Davis, Jr., so it’s no surprise that Earle includes that song here, giving it a reverential rendering true to the song’s early hit versions. But as Earle has said, about his other tribute albums, another goal beyond honoring this mentors and friends is to expose a larger audience to a larger catalog of the songwriter’s work. A real standout here is the lively, full-band workout, Earle and his Dukes give, “Hill Country Rain,” one of the songs that Earle sang near the end of that tribute summer concert.

The record opens with a fun, fiddle driven version of the country rocker “Getting’ By,” where the hero is barely making ends meet, and the “income tax is overdue.” In classic form, the chorus celebrates “just getting’ by on gettin’ by’s my stock and trade/living it day to day/picking up the pieces wherever they fall/just letting it roll, letting the high times carry the low/I’m just living my life easy come, easy go.” That same spirit thrives in the rollicking “I Makes Money (Money Don’t Make Me,” and one of Jerry Jeff’s best busking sing-alongs, “Gypsy Songman,” with the classic line: “My whole life is a song and I’ll share it with you now.”

The back half of the album turns toward the more reflective side of Walker’s songwriting. “Charlie Dunn” is a tribute to the bootmaker, while “My Old Man” celebrates the passing music man. “Wheel” is a song about those who work the land with their hands, while “Old Road,” acknowledges that thing that calls people to travel on, even if it’s “lonely, so cold and blue/tired and hungry, too.” Early sings that last one with only his occasional harmonica to break the brief verses. There’s always a bittersweet quality to tributes, but Earle sings the songs of his old friend with genuine soul. As he puts this final chapter of tribute albums to rest, he says, “The records were recorded and released in the order in which they left this world. But make no mistake – it was Jerry Jeff Walker who came first.”