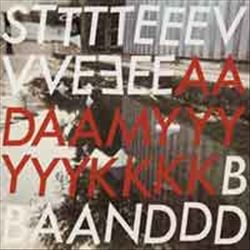 Fire Note Says: The Steve Adamyk Band is back with another quick shot of punk rock for the soul!
Album Review: Canada’s Steve Adamyk Band have emerged over the last several years as a top group in the punk pop world with their no-nonsense approach to the genre that never gets flashy, has plenty of punk hardcore guitar chords and tons of group vocal lines and harmonized choruses that keep you coming back. On the groups third LP aptly named Third the band once again captures a Ramones meets early Lookout Records! style for another fun 21 minute punk n roll romp.
With this compact offering the group gets right into it on the opening “Not A Witness” that has plenty of nah nahs with a feverish delivery that immediate lets you know what the Steve Adamyk Band are going to deliver. On each track you will find a muscular edge emerge that helps separate them from just another punk band. The music is tight, the singing is spot on and when you hit the big melodic song “Rain On Sundays” you will just scratch your head and think “Damn – I can’t get this song out of my head!” This is the response I think any band would go for and when you can keep hitting repeat Third sinks into your memory quickly.

Overall if you start to try and rank the Steve Adamyk Band’s output I think Third may just edge their 2011 record, Forever Won’t Wait, as being their best outing yet but it’s really close. Good punk rock is getting a bit easier to find these days and the Steve Adamyk Band only raises its awareness while setting the bar higher with the help of the Dirtnap Records label consistently releasing quality albums. If you are looking for a just honest and 100% effort punk rock record, look no further than Steve Adamyk Band’s Third for an exciting time as the band lays it all out on table – all you have to do is pick it up!
Key Tracks: “Katacombs”, “Wait For Your Number”, “Rain On Sundays”
Artists With Similar Fire: The Riverdales / Ramones / The Queers
Steve Adamyk Band Website
Steve Adamyk Band Facebook
Dirtnap Records
-Reviewed by Christopher Anthony