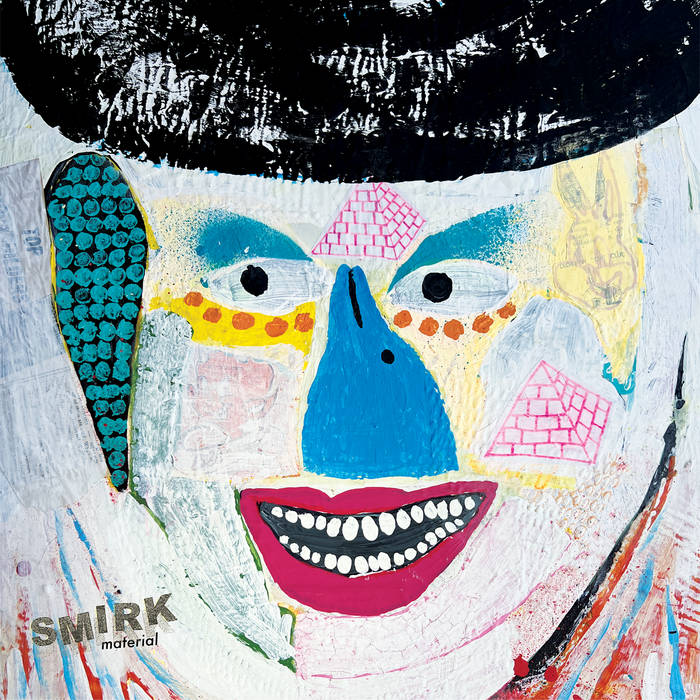 Nick Vicario and his project Smirk gained some deserved spotlight last year with the release of LP. The album combined tracks that originally appeared on two small run cassettes in 2020. Material now represents the first proper full length release from Smirk and it showcases an elevation in both songwriting and song structure!

Smirk’s earlier recordings felt more DIY and lo-fi at times which was perfect for the Wire/Gang Of Four type of punk style that was delivered but right from the opening song on Material, “Material World’s Unfair,” you will hear a new guitar forward muscle along with sharper rhythm transitions that on multiple times will have you checking if its a new track. The pulsating driving rhythm on “Heathen Means” is addicting while the hard crashing punk in “Symmetry” insanely switches up its last 40 seconds with a slower riff that is hard to turn away from. Other places on Material have Smirk giving you different things to hear like the guest vocals on “Revenge” from Iphigenia Foie or the fantastic one two punch midway into the record of “Souvenir” and “Hopeless.” Both tracks feature catchy layered vocals with the later taking it farther with some interplay with Andy Place.

Smirk have a produced a modern punk record that swims in both classic and post waves. It has the swagger you would expect from Los Angeles while showing grit that one would guess could only come from New York. Material has that slightly unpolished sound you hear on an X record while also pushing out some stronger guitar like another LA group, Flat Worms. At only 25 minutes long, Smirk maximizes its sound and has created 10 memorable tracks that only get stronger with every spin!