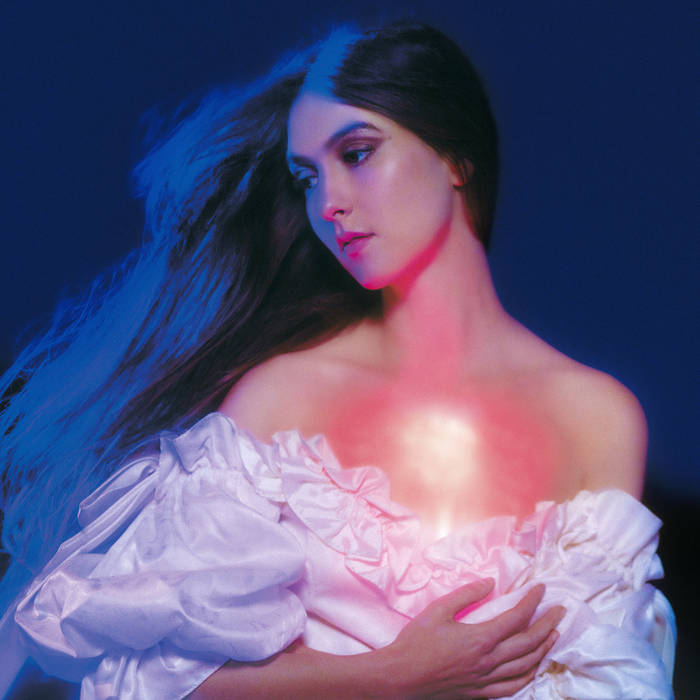 Singer/songwriter Natalie Mering performs under the moniker Weyes Blood, a name derived from her original stage name Wise Blood, taken from Flannery O’Connor’s debut novel. While her earliest works have been more experimental in nature, Mering has settled into a songwriting that recalls 70’s pop artists like Harry Nilsson and The Carpenters, her voice often compared to the late Karen Carpenter, building on piano or folky acoustic guitars with orchestrated strings in lush neo-classical arrangements. And In the Darkness, Hearts Aglow is Mering’s fifth full-length recording, produced by Jonathan Rado, with whom she collaborated on her much-praised last album, 2019’s Titanic Rising.

Mering has acknowledged that “God Turn Me into a Flower,” one of the album’s darker, more ambient tracks, is a reflection on the Narcissus myth, about a poor soul who falls in love with their own reflection in a shimmering pool. She sings delicately of “the curse of losing yourself when the mirror takes you too far.” The two tracks that make up the album’s title appear in reverse order, with the reverberating love song “Hearts Aglow” telling the story of a love who takes her on the ferris wheel on a pier overlooking “that black water down below/knowing I could fall if I let go.” It’s got a classic pop song melody almost as sweet as the cotton candy she sings about, as the strings swell, while “And In the Darkness” is a too brief 16-second instrumental that’s merely a few notes played on an upright double bass.

“It’s Not Just Me, It’s Everybody” opens the album, and is the record’s first single, a slower, brooding pop ballad that takes comfort in the idea that we’re “all a part of one big thing,” even though it often seems like we’re “sitting at a party/wondering if anybody knows me.” In the third verse she suggests that “mercy is the only/cure for being so lonely,” but again, the fact that “we all bleed the same way” offers little grace. She follows this with a brighter sounding melody with a classic 70’s piano pop formula a la Carole King right down to the finger snaps, but that can’t hide the fact that the “Children of the Empire” “know that they’re not free for long.” Both of these songs chime in near the 6 minute mark, twice the length of the standard pop single back in the day, and the later dissolves as the strings come undone.

“Grapevine” feels similar, this time built around a strummed folk guitar, telling the story of a relationship that was promising at first, but was little more than “two cars passing by.” “Twin Flame” plays with some light lounge percussion and a layer of strings for accents, while she sings of the cold left behind when her partner moves on, while “The Worst Is Done” returns to that 70’s pop feel again, an acoustic guitar holding the light rock rhythm in place, another sad story about a life wasted as “we sleptwalked through the years.” Mering has named her upcoming tour after the short instrumental “In Holy Flux,” which mixes ambient voices along the mystical sounding synths and strings, while the record closes with another traditional piano ballad, “A Given Thing.”

The Tallest Man On Earth: Too Late For Edelweiss [Album Review]