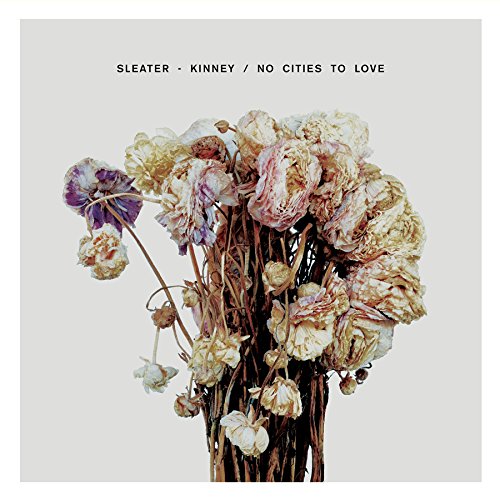 Album Review: These days, it is almost expected that at some point all previous broke up, hiatus and missing bands will all of a sudden announce that they are back. Recently, the reaction to these type of announcements has been met with less excitement because reuniting seems like the “it” thing to do. With that said, when Sleater-Kinney dropped their album retrospective, Start Together, at the end of last year they added a little 7-inch single that lit the indie world on fire. The announcement that the fierce female trio from Olympia, Washington was not only back but had a new studio record in the bag with No Cities To Love was not just a shot of adrenaline – it was an overdose.

The single “Bury Our Friends” was truly worth the wait as it packs a significant punch and was embraced, as it was the first new music since the band’s last release, The Woods, came out in 2005. Honestly, I figured that was probably going to be Sleater-Kinney’s best foot forward but one spin of No Cities To Love reveals a progressive moving band that has once again reinvented their entire existence over this records 10 tracks in just 33 minutes.

One of the biggest draws to Sleater-Kinney for me has been that the group hardly repeats themselves from album to album. Sure there are similar qualities, especially in the first several records but after 1997’s Dig Me Out the trajectory was straight up. This path continues on No Cities To Love right from the opening ripper “Price Tag.” It has everything that you want from Sleater with Corin Tucker’s raw vocals, Carrie Brownstein’s scorching guitar riffs and Janet Weiss keeping a pounding beat. All of that is backed up by cautioning lyrics about greed and the human cost of capitalism. Guess what – this is a Sleater-Kinney record that only keeps getting better.

All three women here are at the top of their game which is why No Cities To Love is completely engaging. The Tucker-Brownstein vocal and guitar interplay is so gelled that it will tire you out in every good way possible. “Fangless” represents this vary component as every member goes in different directions but the song’s walls pull together with an unstoppable magnetic force. The song concludes with “You were born in a shout, But you will die in a silent skull.” Sleater-Kinney is all business here and business is good.

This record never gives you a reason to doubt Sleater-Kinney’s bond, commitment or even believe that they were really idle for 10 years. The deepness of the title track will perplex you with its search for power and emptiness, while musically it contains one of the catchiest choruses. Those combinations of lyrics with sing along moments fill No Cities To Love with memorable line after memorable line. “No Anthems” is no different with its sinister grooving vibes that show another side of the band but when the wordplay of lyrics like “I’m the pool boy filling you with cool joy” crosses your speakers, you cheer for the trio as they search for purpose in the call out “I want an anthem.”

No Cities To Love not only marks the return of Sleater-Kinney but also gives a strong kick to the current indie music scene. Time to up everyone’s game because right out of the 2015 gate, Sleater-Kinney have released one of the best albums of the year. I guarantee I won’t forget about this album in December and after just one spin – you won’t either!