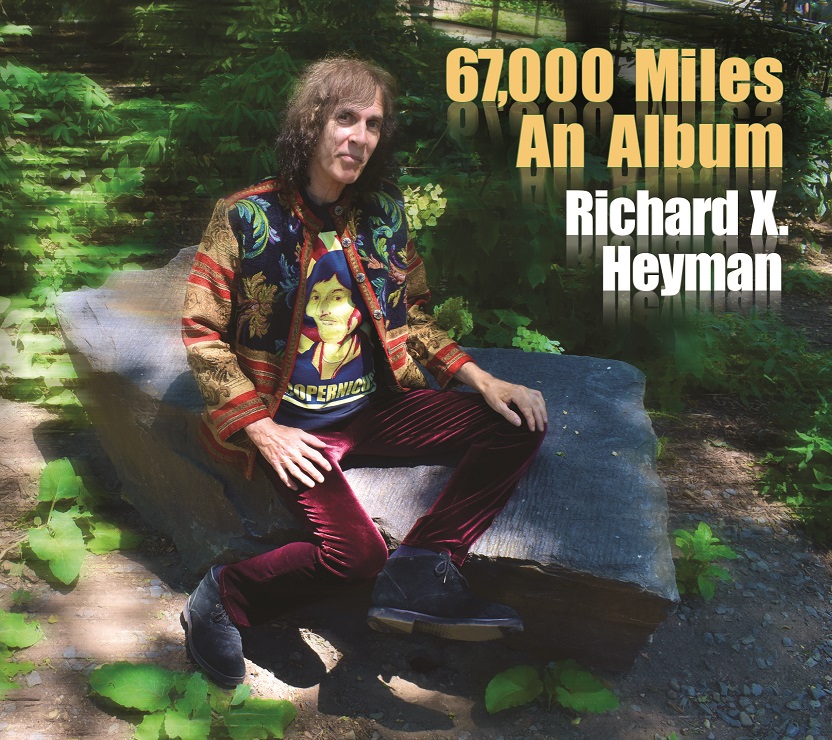 The speed of the earth as it moves in orbit around the sun is 67,000 miles an hour, even though we go through our daily lives entirely unaware of our constant motion. An original member of the 60’s Jersey band, The Doughboys, Richard X. Heyman follows up last year’s power-pop leaning Copious Notes, with 15 fresh tracks that time out at about an hour’s worth of music, thus the title of his 15th solo studio release, 67,000 Miles An Album.

Starting out as a drummer, these day Heyman is a jack-of-all-instruments, playing keyboards, guitars, and singing lead, relying on his wife Nancy Leigh for bass, and she joins him on backing vocal harmonies. As songwriter and producer, Heyman is pretty self-sufficient in the studio, but in addition to some help from Leigh, he gets help on a handful of tracks from Probyn Gregory playing a variety of brass, and when strings are called for Chris Jenkins plays viola, while Julia Kent adds cello. But mostly, it’s a one-man-show.

67,000 Miles finds Heyman displaying more than his more than capable instrumental chops, but he goes back to some of his earliest songwriting to give a sense of his artistic journey. Two songs were actually written when he was only 17 years old, the opening “You Can Tell Me,” evidence of the influence of British pop vocal harmonies and that electronic harpsicord stop with an imitation Baroque run, and “Plans,” which features a tasty electric guitar solo.

Three more tracks find Heyman revisiting tracks from his days with The Doughboys, putting his solo stamp on them. “Travelin’ Salesman” is built on an old school rock & roll, Bo Diddley-rhythm, it’s a bit of a stomper with some strong guitar. “Second Street” has a bit of an urban strut, mixing tasty organ runs with those stacked “woah, woah” harmony vocals, while “Crave” has a big drum sound, and a blend of 60’s rock and pop flavors. Curiously, Heyman’s older songs blend nicely with his more recent compositions, no doubt because he’s still drawn to the sounds and feel of his earliest inspirations.

A couple work nicely with Gregory’s smart horn backing, “Misspent Youth,” and “When The New Dawn Comes,” the last with a vocal melody that recalls Neil Finn’s work with Crowded House. Several things have a British folk-rock feel, “Washington Rock” with harmony lead vocals that are reminiscent of Jefferson Airplane, and there’s a languid Byrds vibe running through “Her Likeness.” “Sure Fire” feels like a 60’s band adaptation of a blues riff, while “History Master” starts out as a fast acoustic folk/rock blues adaptation that opens up to a big electric riff on the chorus. “High Line Scenes,” no doubt a celebration of Manhattan’s raised pedestrian scenic walk way, as a tasty guitar and bassline running along with the rich vocal harmonies.

“Ready for a Fall” opens with Beach Boy-like vocal harmonies, before revisiting that Baroque pop feel with delicate keyboards and strings, and then has a brief sweet sounding guitar solo on top. Heyman has brought together so many different influences in this one piece that you might expect it to dissolve into a mess, but strangely enough it works very nicely. Which can be expanded to the whole of the album, really, in that Heyman has so absorbed his diverse musical influences that they coalesce quite naturally into pleasing, uniquely original shapes. And a case in point is the set-closing “67,000 Miles Per Hour Trilogy,” which true to the title has three distinct parts, a pop/rock opening section that brings together those ringing guitars, fun keyboard runs, and lush vocal harmonies, followed by an elegant instrumental section which sounds like vocals blended with synths, and finally a big rocking jam conclusion with all the instruments getting a moment to shine, an organ run, guitar solo, drums and piano in turn. Heyman brings 60’s tones and textures together in a way that avoids the “retro” trap, but keeping it fresh, engaging, and fun.