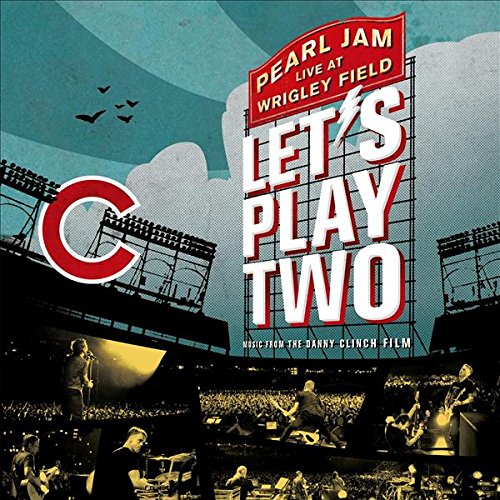 Fire Note Says: The audio companion to the Danny Clinch film of the same title, features the concert performances of some of Pearl Jam’s best known songs recorded during the band’s two day stand at Chicago’s home of the Cub’s baseball club in August, before they won the World Series after an epic 108 year drought.
Album Review: First off, a couple of important clarifications. Let’s Play Two is not a live recording of Pearl Jam’s two day stand at Wrigley Field, home of the 2006 World Series champs the Chicago Cubs, in August of last year, but rather is rather the musical contributions from those shows used in the Danny Clinch film about those concerts and the Cubs’ epic season. A quick glance at the setlists for those two shows, suggests that a lot of Pearl Jams performance was left on the cutting room floor, in favor of the film’s emphasis on Eddie Vedder and the band’s special relationship with the ball team that dates all the way back to his childhood trips to sit in the bleachers at the historic ballpark. So, if you are just interested in the band’s music, there are more complete and satisfying bootlegs and live albums out there. Let’s Play Two, which can be streamed on Amazon Prime, is best appreciated by PJ fans who dig the special spiritual connection between Vedder and the quest for the Chicago team to end a 108-year championship draught which was ended in spectacular fashion in 2016.
But for those who are most interested in the band and its music, Let’s Play Two, which takes its name from the Ernie Banks quote, still has plenty to offer in its double disc glory, which tended to emphasize the band’s best known and loved “hits.” The film reveals not only Vedder’s deep connection with the Cubs, the management and players, but also the reciprocal relationship between the band members and their fans. 25 years earlier from these shows, Pearl Jam had debuted just a couple blocks north of Wrigley, at the no less historic Metro club, where they opened for Soul Asylum, earning $250 for the gig. A year later, based on the buzz from their debut album, Ten, they returned to headline the Metro selling out two nights in short order. And the rest, as they like to say is history.
The audio discs start out with three sing-along favorites, “Low Light,” “Better Man” and “Elderly Woman Behind the Counter…,” which were not played back to back at the band’s shows, but strung together here we get an early indication at the devotion of the fans and how much they were invested in participating in the event, adding their own voices to Vedder’s. From there things begin to build in musical intensity, with “Last Exit” leading in to “Lightning Bolt,” the one song here from their most recent studio album of the same name, and “Black, Red, Yellow,” which includes a vocal cameo from Chicago Bulls basketball hero, Dennis Rodman.
The middle section of the film/concert album heats up musically, with strong versions of “Black,” “Corduroy,” “Given to Fly,” and “Jeremy,” all veritable “greatest hits.” “Inside Job” reveals Vedder’s more spiritual side, and “Go” finds the band celebrating their early punk influences. Which goes to show that “grunge” was a pretty stupid label to attach to the bevy of bands that began flowing out of Seattle and the great North West on the wings of Nirvana. While there’s little doubt that Pearl Jam wore the flannel uniform, the band was serious rock & roll unit, that grew from it’s early garage band days quickly into serious songwriters, with strong musical skills apparent in Mike McCready’s stellar guitar soloing (check out “Alive” here) and Jeff Ament’s serious bass chops (like his 12 string bass playing on “Jeremy,” which shapes the song’s melody).
These three get solid support consistently from steadfast rhythm guitarist Stone Gossard, drummer Matt Cameron since 1998, David Letterman’s joke about Pearl Jam’s plethora of drummers at their induction into the Rock & Roll Hall of Fame notwithstanding, and since 2002 by keyboard player Boom Gaspar, which I’m sure is his given name. Gaspar takes a lengthy Hammond organ solo in the band’s cover of “Crazy Mary,” by Victoria Williams which dates back to “Sweet Relief,” a benefit album for musicians facing health crises without insurance. During that lengthy solo, the film version reveals that Vedder is sharing drinks from a huge wine bottle with people in the front rows, which you’ll only know if you check out the film version. Similarly, “Release” begins with Vedder’s shout out to a fan named John that waited 4 days in line to get that front row space, and interviews with him appear early in the movie.
The final tracks are Vedder playing “All the Way,” a song about the Cubs and that special feeling one gets at Wrigley Field, where for too long the motto was “we’ll get ‘em next year.” This collection closes with a cover of “I’ve Got a Feeling,” by the Beatles, which means we don’t hear the other covers that were included in those shows, which were “Rain,” another Beatles number, “Last Kiss,” Cheap Trick’s “Surrender,” Neil Young’s “Rockin’ in the Free World,” Bob Dylan’s “Masters of War,” The Who’s “Baba O’Riley,” The Ramones’ “I Believe In Miracles,” and two by Pink Floyd, “Comfortably Numb,” and “Interstellar Overdrive.” Bet there are solid recordings of the whole show, including all the originals that didn’t make this final edit out there somewhere where bootlegs are more common than you’d think.
Key Tracks: “Last Exit” / “Corduroy” / “Alive”
Artists With Similar Fire: Nirvana / Soundgarden / Soul Asylum
Pearl Jam Website
Pearl Jam Facebook
Republic Records
– Reviewed by Brian Q. Newcomb