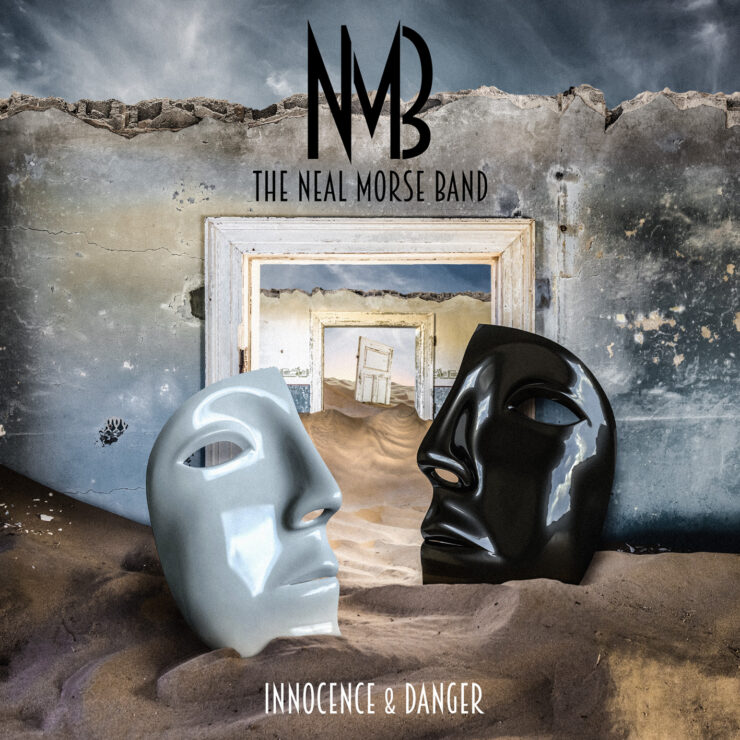 The Neal Morse Band may have had a descriptively inaccurate name all along but the label wanted the Morse name-recognition thing to help sales. With all five members actively writing and arranging (and four of the five singing lead) it was probably the right time for a rebranding and so it is now NMB: Neal Morse, Mike Portnoy, Randy George, Eric Gillette and Bill Hubauer. Those first two names have now recorded 24 studio albums together – and at least as many live albums. The partnership, which began with the debut Transatlantic LP when Neal was a part of Spock’s Beard and Mike was still in Dream Theater, has been the most productive, engaging and consistently solid Prog duo in history. From Transatlantic to Flying Colors, Neal’s solo albums to NMB there has not been a duff note. Portnoy’s loud and thunderous drumming has been the backbone for some of the greatest progressive music ever written as it fits Neal’s emotional, melodic songwriting to a tee. Now after two double-length concept albums, NMB returns to territory first explored on their 2015 debut – an album of unrelated tracks.

Though not a concept album, Innocence & Danger is the band’s third straight double album. It wasn’t supposed to be. They went in wanting to do a single album but ended up with too much material. Disc One (Innocence) has the shorter, more accessible songs while Disc Two (Danger) consists of two major epics. The majority of the Prog community will no doubt gravitate to the second disc – so we’ll talk about that first. The one thing lacking from the last few Morse projects has been the big epic. Although one can make a case that the new Transatlantic was actually one really long song, it doesn’t play out that way. Neither does Neal’s latest solo album, Sola Gratia. Or the last two NMB records for that matter. We want epics!!! And we got them. Two of them. The first of them, “Not Afraid Part 2,” is classic Morse. Clocking in at 19 minutes it has everything one could hope for in a Prog epic. A haunting piano melody gives way to the full band playing the same theme. That gets interrupted by A Portnoy/George drum and bass breakdown over which Neal introduces us to the second main theme. The vocals (by Morse) appear early on and perfectly set it up for when Eric Gillette’s voice reprises it toward the piece’s finale. There are so many twists and turns along the way that it may take a few listens to get it all (check out the middle section with the Supertramp verses and the Styx-like chorus – marvelous stuff.) But that’s nothing compared to the 31 minute beast that is “Beyond The Years.” Like much of Innocence & Danger this one came from a Bill Hubauer demo. An orchestrated six bar figure opens it up and you know this is going to be special. Divided into seven sections the song is truly a master class in arrangement. Somehow the band finds a way to meld heavy metal, classical, bossa nova, a cappella and classic rock throughout the track’s impressive run time. At no moment does it feel long, forced or contrived. The symphonic section returns at the end only to abruptly stop, forcing the listener to evaluate what was just heard. Not a new idea (Dream Theater did it too) but placed at the end of a half hour tuneit is jarring. It’s unnerving. It’s awesome.

Disc One is where the more “normal” material dwells. It starts off marvelously with the one-two punch of “Do It All Again” and “Bird On A Wire.” Both are fantastic mid-length tracks that start the album off with high energy, killer soloing and soaring vocals. The pattern seems to be that Neal sings the verses, Eric gets the refrains and Bill sings the bridges/middle eights (with Mike getting a verse here and there.) It totally works. Things start to slow down with the Beatles-inspired “Your Place In The Sun.” It’s a charming piece that recalls “The Ways Of A Fool” from The Similitude Of A Dream or “Vanity Fair” from The Great Adventure. Unfortunately the desire to make this a double album becomes a bit problematic after that. “Another Story To Tell” sounds more like Toto than NMB and “The Way It Had To Be” was left off The Great Adventure for a reason. That is followed by a rather hookless acoustic guitar number that segues into “Not Afraid Part 1.” This song bears no similarity to Part 2 but it is a nice little ditty that calls to mind Crosby, Stills & Nash. The first disc ends with the biggest risk NMB have thus far taken: they cover the legendary song “Bridge Over Troubled Water.” Covers are nothing new to this band but to place one on the record proper instead of relegating it to a bonus disc? I know Yes covered “America” so there is a history here of Prog bands doing Simon & Garfunkel but is it necessary? I’m not so sure.

As the album’s title implies, this record has a split personality. My rating reflects that. Disc One is okay. Disc Two is everything. Fans were tiring of the long form storytelling of the last couple concept albums and yearned for something like this. The spiritual undertones are basically absent this time around and that should help some listeners who may not share Neal’s religious beliefs. There’s a lot to digest on both discs and the decision to sequence the album in this way is interesting but perhaps not wise. The first two songs on Disc One along with both epics would have made a 66 minute record. Arranged with the two epics bookending the two shorter pieces would have made a perfect album for me. But this is NMB, man. Can one really ever have too much of a good thing? Yah, I didn’t think so.