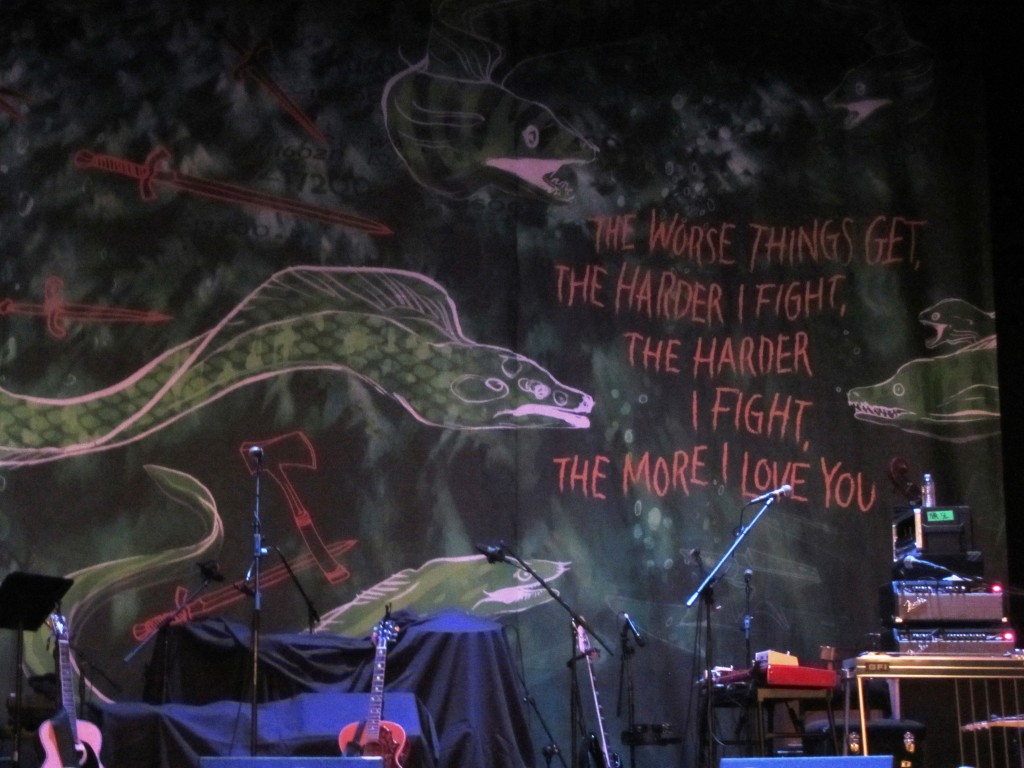 I saw Neko Case 10 years ago in a much smaller venue so I was very excited to see one of the best voices in music live again at the Taft Theatre in Cincinnati Tuesday night. Well that excitement ended very quickly as Neko hit the stage with a starting stretch and yawn telling the crowd that it was time for her to wake up.
Dressed in a simple shirt, pants and disheveled hair Neko launched into “Where Did I Leave That Fire” from her new record The Worse Things Get, The Harder I Fight, The Harder I Fight, The More I Love You (TFN Review). It would be the first of eight tracks she would perform from the album. Her flawless but listless delivery rolled into the next song, “This Tornado Loves You,” from her 2009 record Middle Cyclone. You expect that the music would rule the night when it comes to Neko Case but quickly during this track the night took an ugly and uncomfortable turn as Case stopped the show (for the first time) to confront audience members that were taking pictures with their cell phones.
She “politely,” (OK not really – somewhat direct and disgusted) told everyone that if they didn’t put their cell phones away she would leave the stage and the show would be over. The crowd tried to move on as even Neko’s band went back n forth on where to pick the song back up to get the show on track. Case’s by the numbers delivery continued just another few songs when she stopped again (for the second time) and singled out an audience member that apparently was still not complying with her no cell phone request. After some “refund” banter back n forth between the “fan” and Neko, the confrontation ended with her stating that she would gladly refund their money and anyone else’s that wanted to leave. After about a 5 minute standoff (and people leaving) and a few encouraging chants from the crowd (one guy even made a joke that his babysitter tab was running) Neko and the band picked back up again. I will tell you that it was one of the most uncomfortable 5 minutes I have ever witnessed at a show before and killed any chances of the already tainted night to improve.
After the third interruption from Neko to a fan a few more songs into the setlist there was even a woman that ran down the aisle with her phone taking as many pictures as possible until the staff turned her around. Neko went on to complain that signs for “no pictures allowed” were posted all over the venue but that was not the case. There were no signs nor were there any announcements about this request. In fact, the Taft Theatre website lists this “cameras small enough to fit in a man’s shirt pocket are allowed.” I believe that covers phones as well. It was also a little ironic that there was a person just off the stage that appeared to be with Neko that was on her cell phone the entire time.
Now I am not up for debating this issue because if an artist makes this request I feel people should comply and it should be known before the show goes on. TFN did not take a picture for this article because of the request. Much like the recent Neutral Milk Hotel show (TFN review here) the notice of no pictures, including cell phones, was everywhere and included theatre staff reminding attendees upon entry. We can debate all day about the use of cameras in shows but at the end of the night Neko just simply mishandled the situation and not only let it get to her but extinguish a night in Cincinnati that she should have owned. Alright, back to the music!
Neko’s set focused on her last three records as 18 out of her 21 song setlist could be found on these albums. This was fine but longtime fans (like myself) would have loved to hear cuts like “Deep Red Bells,” “Blacklisted,” or even one track from 2000’s Furnace Room Lullaby. I will say that her new song “Night Still Comes” along with an encore performance of “I Wish I Was The Moon” was spectacular. Case also comes armed with superb talent with longtime backup singer and comic sidekick, Kelly Hogan, multi-instrumentalist Jon Rauhouse and guitarist Eric Bachmann (Crooked Fingers, Archers of Loaf). Kelly Hogan actually tried to save the night several times with her light hearted comments.
As I stated above, Neko Case has one the best voices in the business. It is too bad that this was just not her night. Maybe she was sick, tired and/or just pissed off but for most fans that attended I believe they walked away underwhelmed and a bit jaded. The picture/cell phone debate seems to be a growing issue but it should never take control of the night – unfortunately it did for Neko.
Neko Case: Taft Theatre, Cincinnati, Ohio – 10/22/13 Setlist
Where Did I Leave That Fire
This Tornado Loves You
Bracing For Sunday
Lion’s Jaws
The Next Time You Say Forever
The Tigers Have Spoken
That Teenage Feeling
People Got A Lotta Nerve
Maybe Sparrow
Nothing To Remember
The Pharoahs
City Swans
Red Tide
Star Witness
Calling Cards
Hold On, Hold On
Night Still Comes
Man
Encore:
Local Girl
I Wish I Was the Moon
Ragtime