MUTEMATH: Nothing “Typical” About This Band [Concert Review] 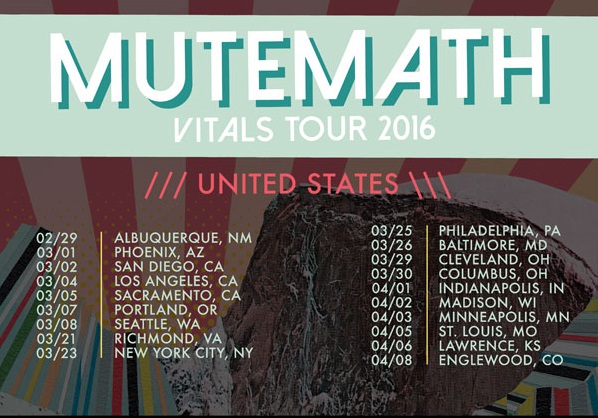 MUTEMATH: Newport Music Hall, Columbus, OH – March 30, 2016
The first time I saw MuteMath was ten years ago, their self titled debut album had come across my desk as a pre-release but it wasn’t yet in stores. They were playing one of those tiny trailer sets early in the day at the Warped Festival, and they tore up the place for a crowd of only a couple dozen. They rocked non-stop for their allotted 30 minutes, songs segued one into the other, at one point all four of them drumming on some piece of equipment not intended for percussion. My young son and I were very impressed, turned into instant life-long fans. We saw them play a brief opening set on their Odd Soul Tour, opening for Linkin Park and Incubus, but we’ve been looking forward to the chance to see them in a headline situation.
Wednesday night’s show was the perfect opportunity, and the Newport Music Hall, near the OSU campus in Columbus, is a great venue for intimate shows, the open floor for standing, a small balcony along the side walls and around toward the back of the venue. MuteMath’s gear and stage lights seemed cramped on the small stage, but the ingenuity and energy of the band overcame any limitations the setting presented.
Drummer Darren King led the band to the stage, taking a moment to duct tape his large headphones to his head with a theatrical air. Soon he was propelling the band through the opening track, “Stratosphere,” from the band’s newest CD, Vitals, the most EDM sounding of their four full-length releases, while vocalist Paul Meany appeared standing high behind the band, making the most of their elaborate lighting set up for a dramatic entrance.
While the band obviously uses a fair amount of backing tracks and samples to produce their dense, complex, layered sound live, King’s muscular drumming through the 22 song set, leave little doubt that this quartet is playing all the essential parts live, and they have the broken sticks to prove it. Holding the center of the band together in the middle of things is bassist Roy Mitchell-Cardenas, who also played a fair amount of guitar and synths throughout the set. In addition, their newest member, Todd Gunnerman played many of the lead guitar parts on much of the older material, but on lots of the newer more techno-sounding songs added additional keyboards to the mix.
Like most touring bands, MuteMath had set up their set to favor their latest release, Vitals, playing eleven of the album’s twelve tracks, saving “Monument,” the song best known for its lovely video of a widowed man holding dear the memory of his wife, for near the end of the show. But they were careful to serve up some of the most memorable tracks from their three previous releases, with a surprising number for their earliest days. A little past the mid-point, Meany quieted things down a little to tell the responsive crowd that they were going to play a few from their earliest days together – reaching back for “Control” and “You Are Mine” before returning to the newer material with “Safe If We Don’t Look Down.”
MuteMath constructed the show so that the energy would build like an emotional wave to a peak, and then settle things down with a softer, gentler ballad, like “All I See” and “Safe…” The artful use of dynamics kept the music sounding fresh and vibrant, while supported by the band’s natural inclination towards showmanship. While many of the songs are constructed around techno-pop hooks, and beds of keyboards and synths, there’s a strong R&B vibe that bespeaks the band’s New Orleans hometown in the way they deliver the vocal melodies. Meany was in strong voice and high energy throughout the night, and fun surprises added to the fun, like King’s drum-pad gloves that he put on folk in the front rows so that he could play drum sounds by giving them high fives.
Highlights of the set included “Prytania,” “Light Up,” “Noticed” (with its nod to Sting), “Used To,” “Best of Intentions” and “Spotlight.” They closed out the show with two from the very early days, back when we saw them in the trailer at Warped, the instrumental “Reset,” and “Typical,” which concluded with Meany surfing on the hands of the crowd with a lit-up air mattress, a high energy conclusion to a fun, highly musical, high energy show. There’s nothing “typical” about this band.
-Review by Brian Q. Newcomb
Setlist:
Stratosphere
Chaos
Prytania
Clipping
Light Up
All I See
Noticed
Vitals
Joy Rides
Composed
Used To
Blood Pressure
Control
You Are Mine
Safe If We Don’t Look Down
Armistice
Best of Intentions
Bulletproof
Spotlight
Monument
Reset
Typical

The Friday Fire Track: The Virginmarys – “Moths To A Flame”