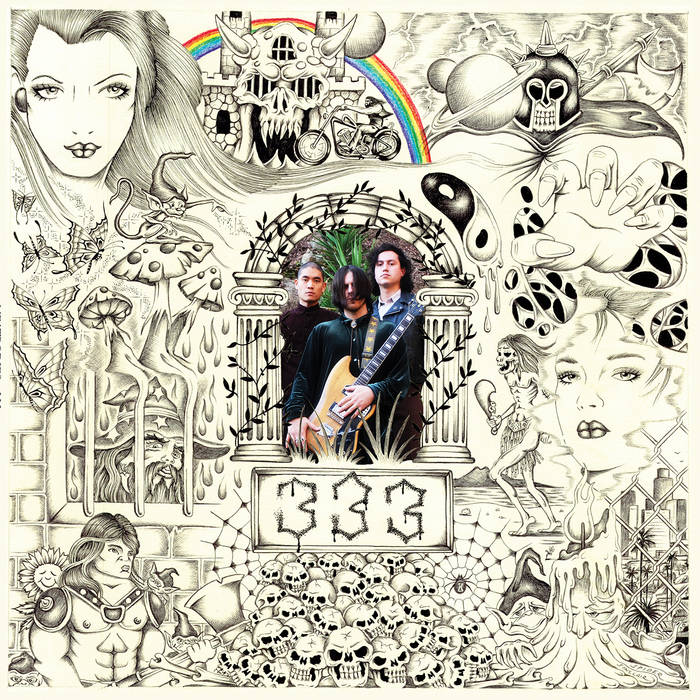 Meatbodies’ Chad Ubovich has kept busy over the last decade playing in Mikal Cronin’s backing band, playing along Ty Segall and Charlie Moothart supplying the killer bass in Fuzz, and then releasing two albums and touring to support his own Meatbodies. The group now returns with the seven song 333 which was developed from a discovered cache of demos that Ubovich and drummer Dylan Fujioka had recorded in a bedroom back in the summer of 2018.

Of course, 333 was not supposed to exist as Meatbodies already had a new album recorded when COVID put the normal plans on hold. That leads us to the much more experimental and loose 333. With that said, you might be thinking something completely different from the group but the heavy Sabbath riff that opens “Reach For The Sunn” just crawls along with a shaking pulse. Its darker tone sorta paints the overall picture of the material here but it is a killer track that just wants to explode out of your speakers. The Led Zeppelin like bounce on “Let Go (333)” morphs from an acoustic driven jam into a spacy whirlwind finish. “Night Time Hidden Faces” is up next and the song represents the liberties and freedoms found on 333 as it moves from a synth driven sing along track into a mind melting psychedelic trip that turns upside down with its distorted conclusion.

Meatbodies are in a good space on 333 as it shows a different side of their abilities. From the instrumental “Eye Eraser” to the slower Beck like closer “The Hero,” Meatbodies will surprise you around every corner. The record does not have a full cohesion from song to song but each track’s uniqueness is something to be celebrated. If you liked their first two albums, 333 will be an enjoyable listen and just cranking up the volume on the opening track alone is worth your admission price to this Meatbodies outing.