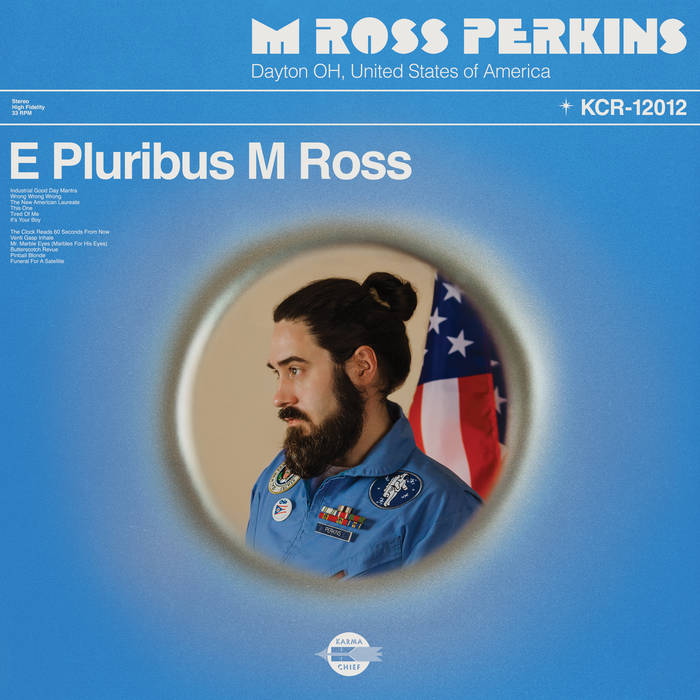 Colemine Records is best known for their soul and funk acts like Durand Jones & The Indications, Monophonics, and Delvon Lamarr Organ Trio, but lately they’ve been putting out a lot of great records on their Karma Chief imprint. Whether it’s the psychedelic soul sounds of Ghost Funk Orchestra and Kendra Morris, the electric blues of GA-20, or the psych-tinged folk-rock of Andrew Gabbard, Karma Chief’s recent releases have set a very high standard. The most recent addition to the roster, Dayton’s M Ross Perkins, adds extremely catchy early 70s-style psych-pop to that list and keeps the streak going with his sophomore album E Pluribus M Ross.

Recorded one-man-band style like fellow Daytonian Andrew Gabbard’s Homemade, Perkins pulls out all the stops for E Pluribus M Ross, drawing on a diverse mix of influences from the late 60s and early 70s. Tracks like “Tired Of Me” and “Venti Gasp Inhale” are twangy west coast-style psych rockers that call to mind Buffalo Springfield and The Byrds , while opener “Industrial Good Day Mantra,” “This One,” and “Mr. Marble Eyes (Marbles For His Eyes)” are indebted to UK psych-pop, especially acts like The Kinks and The Move. Then there are the typical do-everything-yourself touchstones Paul McCartney and Emitt Rhodes, whose influence is felt on tracks like “The New American Laureate” and “Butterscotch Revue.” One of the most natural comparisons, though, is Harry Nilsson, who Perkins not only resembles vocally but whose wry sense of humor he channels in songs like “Wrong Wrong Wrong,” “This One,” and “It’s Your Boy.” He may not have Harry’s range (who does?), but Perkins’ knack for lyric delivery, melody, and vocal arrangements give these catchy tracks additional layers that will have you hearing new things with each listen.

E Pluribus M Ross may be rooted in vintage sounds, but it blends those influences into a coherent whole that’s both comforting and surprising. Like the best classic pop albums, it works on multiple levels. The album is full of earworms you’ll find yourself humming or playing through in your head, and there’s at least one line in every song that will catch your attention and make you grin. But it also works as a “deep listen” sort of album, whether you zero-in on the impeccably multi-tracked instrumental performances, the songwriting curveballs, or the lyrics’ ironic, self-deprecating humor. In other words: yet another winner from the Karma Chief roster. Perkins may claim to be tired of himself, but it’s pretty hard to get tired of E Pluribus M Ross.