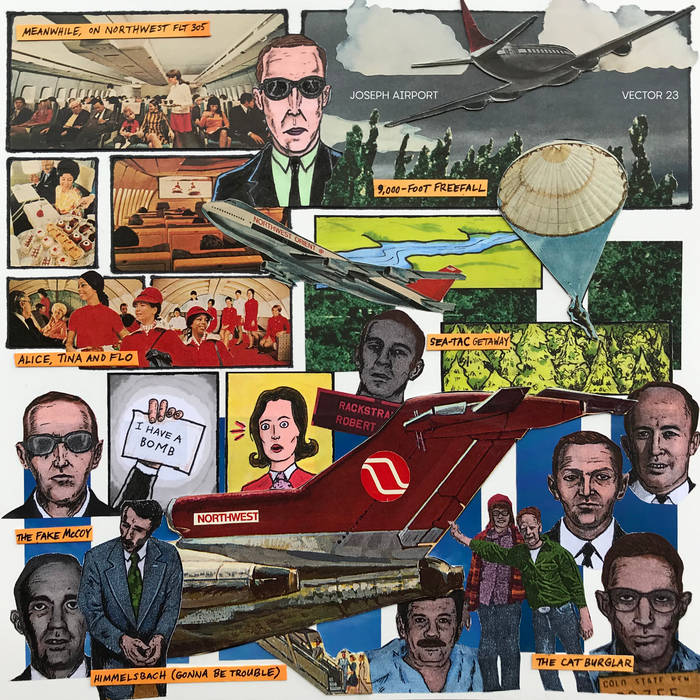 On November 24th, 1971, during a Northwest Orient Airlines flight from Portland to Seattle, a man going by the name Dan Cooper handed one of the flight attendants a note. When she started to walk away without reading it, Cooper leaned toward her and said, “Miss, you’d better look at that note. I have a bomb.”

So began the “D.B. Cooper” incident, the most famous airline highjacking of the 20th century. After demanding $200,000 and four parachutes, Cooper jumped out of the plane somewhere over the Pacific Northwest, never to be seen or heard from again. The story became the stuff of legend, with Cooper’s true identity, his motivations, and his eventual fate generating numerous theories over the years. But one thing it never generated was a full-blown rock ‘n’ roll concept album—that is, until now.

What’s surprising about Vector 23, Joseph Airport’s seventh full-length album, isn’t that the concept actually works. Anyone who’s listened to closely to their earlier work knows the band can pull off lyrical conceits that seem like they shouldn’t work on paper, but somehow do when they’re coming out of your speakers. The most impressive aspect of the album is the music itself, with the band creating catchy but intricate arrangements that somehow perfectly mesh with lead singer and lyricist Matthew Cutter’s understated storytelling. Guest guitarists Jason Riley and Jim Mertz add texture to the performances of the core band (Jereme Sanborn, Ben Penry, Jason Short, Dan Nolan, Joe Patterson, and Cutter), recalling the rich melodic riffs of Mick Ronson one moment, the angular abstractions of Wire the next. Drummer Jason Short did the album’s mixing, and listening through its 18 songs you can tell he spent time getting it just right.

Lyrically, Vector 23 avoids the pitfalls of heavy-handed concept records. It doesn’t tell a linear version of the story, instead taking a more fragmented and impressionistic approach. Tracks like “The Gent In 18-C” or “Alice, Tina, and Flo” examine individual characters in the story, while the Bowie-esque “Agents Await Your Arrival” and “Looks Like Tacoma Down There” recount key moments in flashes of imagery and dialogue. Linking some of the tracks are short “radio transmissions” that recreate the exchanges between the pilots of the highjacked plane and the control tower, a nice touch that gives the album a unified feel. The album ends with a deathbed confession, but by the time we reach the conclusion it’s clear that this is just one possible solution to the mystery, a tall tale that’s just as likely to be smoke and mirrors as it is a true explanation of how that day’s events unfolded.

Vector 23 isn’t a celebration of the man who called himself Dan Cooper. Rather than painting a hagiographic portrait of the highjacker as some sort of latter-day John Dillinger or Robin Hood, the album instead throws open the story’s overhead bins, letting fact, fiction, and speculation tumble out into the aisle and intermingle until you can’t tell one from the other—just like the real case itself. The world will probably never know the true identity of D.B. Cooper or what happened to him. But Vector 23 doesn’t try to find the answers to those questions—it just tries to tell the story in a way it’s never been told before, and the result is one of the best albums of 2022.

Turnover – “Myself In The Way (feat. Brendan Yates)” [Video]