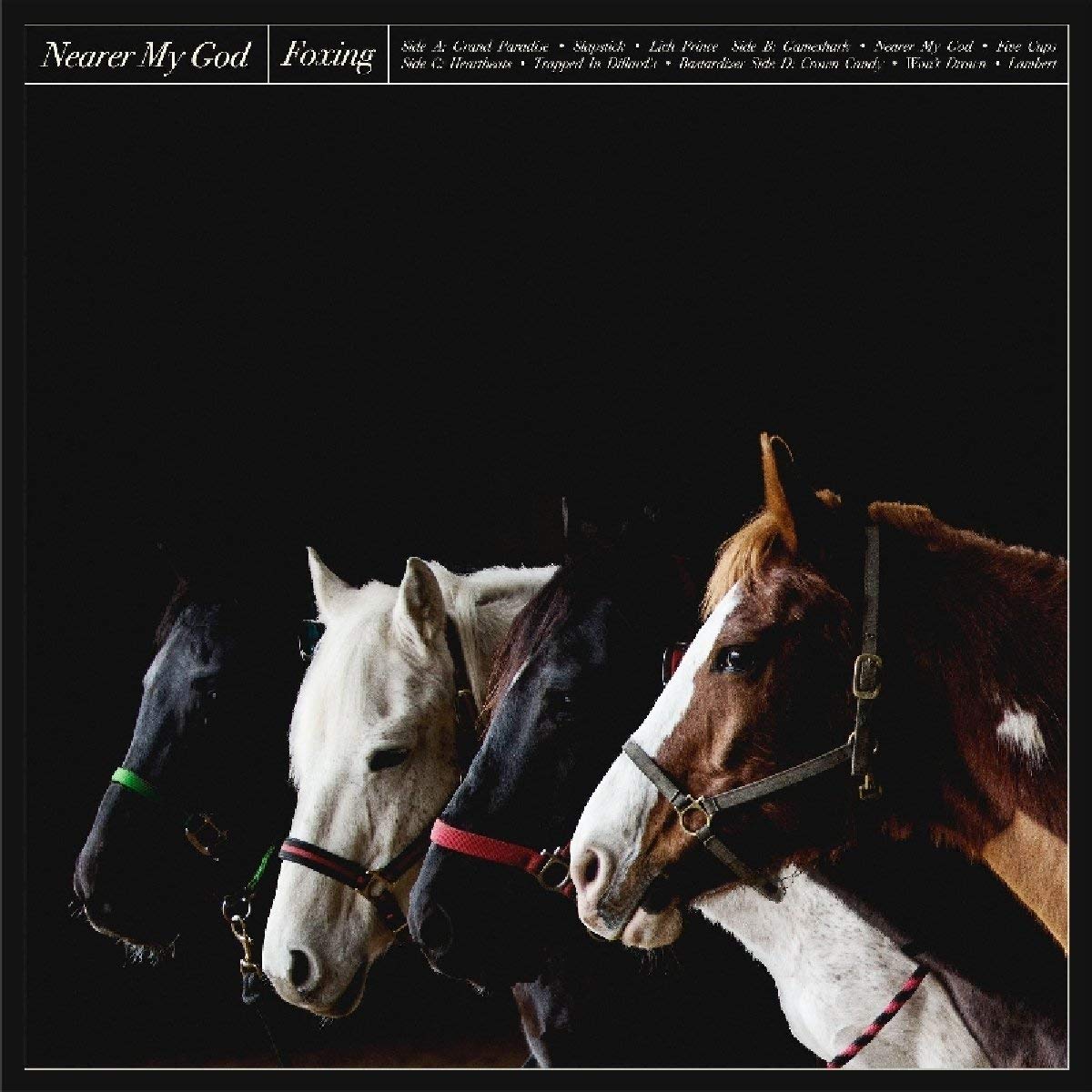 Fire Note Says: St. Louis band Foxing makes bold, cinematic music, that both invites and withholds, marked by lush instrumentation, with passionate, at times paranoid, stacked vocals.
Album Review: The third album from St. Louis band, Foxing, arrives in your speakers with an expected sense of presence and purpose. The band’s panoramic, high end and expansive sound is so bold, wide and cinematic that it takes several listens to be able to distinguish the unique instrumentation, as the stacked, passionate vocals seem to dominate the mix. In other places, the vocals are isolated, processed but always dramatic, like at the beginning of “Lich Prince” where the opening features a paranoid rant, someone at their breaking point, who’s insecurities have taken over. The song builds on a strong drum beat core, as dense guitars compete with spacey synths, to give cinematic flair to a breakdown marked by soaring guitars, vocal screams and spasms. Foxing invites the listener to follow a person’s inner journey, much as if creating a rock musical where his inner demons double as a rocking rhythm section laying down the funky twists and turns of “Gameshark,” while again the intense vocals wail and scream.
On the one hand there’s a refined quality in the production and song-craft, but there’s also a quirky, even aggressive creative edge that’s hard to define. This band is pushing at limits and thinking expansively, but not offering easy access ramps for the novice listener. But it’s a combination that works, first impacting the listener by the artful intent, but with greater familiarity the wall of sound begins to open up, and you can sort out the delicate interwoven instrumental interactions, hear the piano chord underpinning, the acoustic guitar coda, the strong percussive elements, the various voices in the mix. There’s a subtly to the way the music unfolds on repeated exposure.
Beyond the surface paranoia, there is the album titles hymn reference, the melody of which is suggested at the end of “Gameshark.” Other references include local St. Louis spots, like “Crown Candy,” and “Lambert,” which is the city’s airport, and “Trapped In Dillards,” for a long time one of the city’s largest retailers. While there are some clear connections, often we’re left with an intriguing mystery, like the 9 minute “Five Cups” which includes a fair amount of recorded music played backwards. Even when they straighten out the narrative and play a song more or less in one direction, as in “Bastardizer” where the narrator keeps asking if you think they don’t remember some event that they never quite explain. The consist result across the album’s 12 tracks, full of compelling, assertively modern melodic sounds – from rock instrumentation to orchestra strings, and anything else you can imagine from bagpipe to bell chimes – with dominant vocals that remain challenging to decipher, which may well be part of the point, that some passionate voices are so personal that even when they cry out, it’s not always clear what they seek to communicate.
It’s an intriguing thing that Foxing is about, an intricate musical exploration of passionate feelings and moments that are still shrouded in mystery, while on musically cinematic display. If this comes from a sense of artful withholding or ambivalence it is not clear, but this listener is drawn to the sonic landscape and curious where the path forward leads.
Key Tracks: “Slapstick” / “Gameshark” / “Heartbeats”
Artists With Similar Fire: TV On the Radio / Modest Mouse / Arcade Fire
Foxing Website
Foxing Facebook
Triple Crown Records
– Reviewed by Brian Q. Newcomb