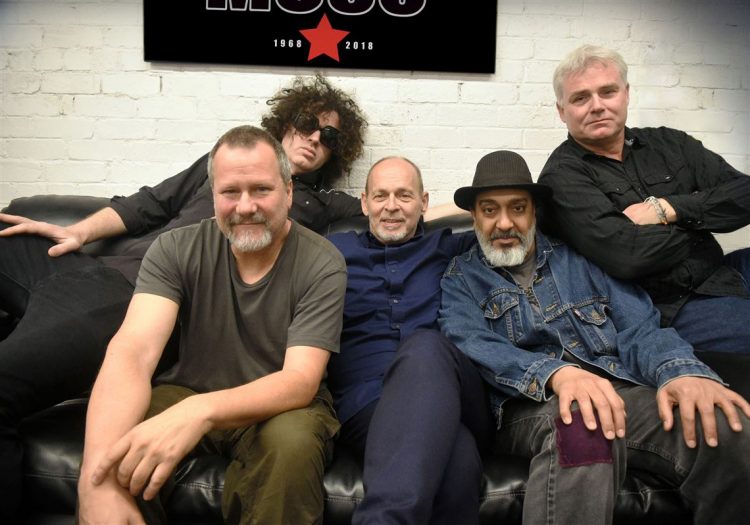 MC50 “Kick Out The Jams” The 50th Anniversary Tour w/ The Detroit Cobras & Lift The Medium; Bogarts, Cincinnati, OH – Thursday, October 25, 2018
Thursday night’s MC50 concert was a chance for some to revisit history, as the band’s original guitarist, Wayne Kramer, returned with an all-star supporting cast to relive the music of MC5, fifty years after the fact. For some of us, who were too young to catch the Detroit band live all those years ago (I was 11 in 1968) but have learned to love the band’s groundbreaking musicality, spirit and attitude second hand through their recordings and the celebrated revolutionary mythos that grew from the stories told about their live shows, it was a chance to relive the past for the very first time.
Of course, Kramer couldn’t do this alone, but a “real” reunion is impossible since the band’s original vocalist Rob Tyner and other guitarist Fred “Sonic” Smith both died of heart attacks in the early 90’s, and the band’s bassist Michael Davis died earlier this decade. The other remaining original living member of the Motor City 5 is drummer Dennis “Machine Gun” Thompson, was not present, but Kramer did pause mid-set to show respects to his long departed brethren and Thompson, who collaborated to make history 5 decades back. 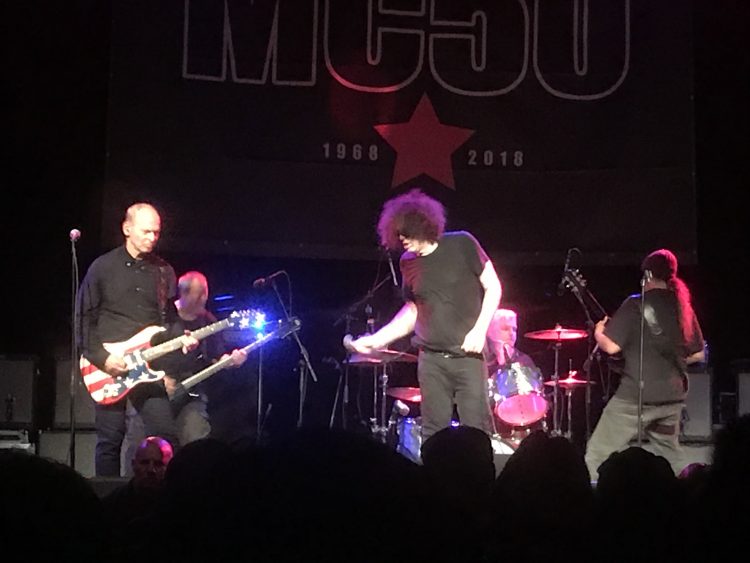 To flesh out the band on the 50th Anniversary tour, Kramer turned to some punk/alternative all-stars. Kim Thayill of Soundgarden played the role of second guitar, Brendan Canty of Fugazi played drums, and previously advertised bassist Dug Pinnick of King’s X was replaced by Billy Gould on Faith No More, and the lead vocalist was Marcus Durant of SF Bay area indie-rock band, Zen Guerilla. But from the opening song, “Ramblin’ Rose,” it was obvious Kramer ran the show and the band members appeared delighted to be there, add their own bits, and follow his lead.
For that first song, Kramer took center stage, and sang lead on “Ramblin’ Rose,” a blues song that had originally been recorded by Jerry Lee Lewis, that the MC5 had been turbo charged and run through their unique garage guitar rock rejuvenator. Originally Kramer had sung the song in a falsetto, but on Thursday night had adjusted it down to his normal singing voice. As that song finished, Kramer moved to stage left, while Durant moved to center stage and delivered the opening kick and classic line, “Kick out the jams, Motherfuckers,” the controversial opening manifesto of MC5’s debut album title track, “Kick Out the Jams,” and things shifted into high gear and stayed there through the rest of the show. 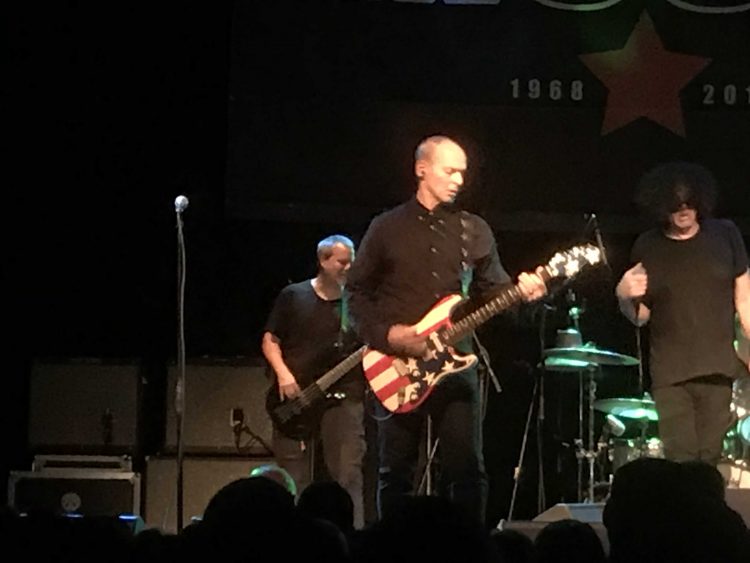 At that point, with one minor exception, Kramer left his newly revitalized version of the MC5 track by track through the band’s 1969 debut album, following the album’s opening one-two punch with “Come Together,” not the song of the same name by The Beatles. The one change in song order came when they moved “Motor City Is Burning,” from its place on side two (vinyl, you’ll remember has two sides, and would have been sixth in the rotation), up to forth, another non-original by the band that is built on top of a traditional walking blues, but in the MC5’s hands evolved into so much more. Both Kramer and played guitar solos, at one point dueling at the same time… not playing the same notes or lines in harmony (as the Allman Bros. and others have done), but each soloing in the same key at the same time… to nice effect. And vocalist Durant added some bluesy harmonica on a solo of his own.
Early on, Thayill seemed satisfied to play rhythm chops supporting the soloing efforts of Kramer, who at 70 not only seemed to be having the time of his life, but played great solos throughout the night, exhibiting the kind of world class instrumental skills that got him on Rolling Stone Magazine’s list of 100 Best Guitarists of All Time. But, Kramer was obviously having fun, fronting this great band, re-visiting these great songs from his youth. He bounced around the stage, skipping and jumping to the beat of the songs, sometimes moving his guitar around to the beat, like he was part of an R&B review that had synchronized dance steps. At one point late in the set, he seemed to be challenging Thayill to follow suit, but Thayill who clearly was also enjoying the music he was playing, just couldn’t follow where Kramer’s jerky movements led, but there was a lot of good will from all the “all stars” who were there to support Kramer, and you could see it in their faces and in the energy they brought to the performance of this classic material. 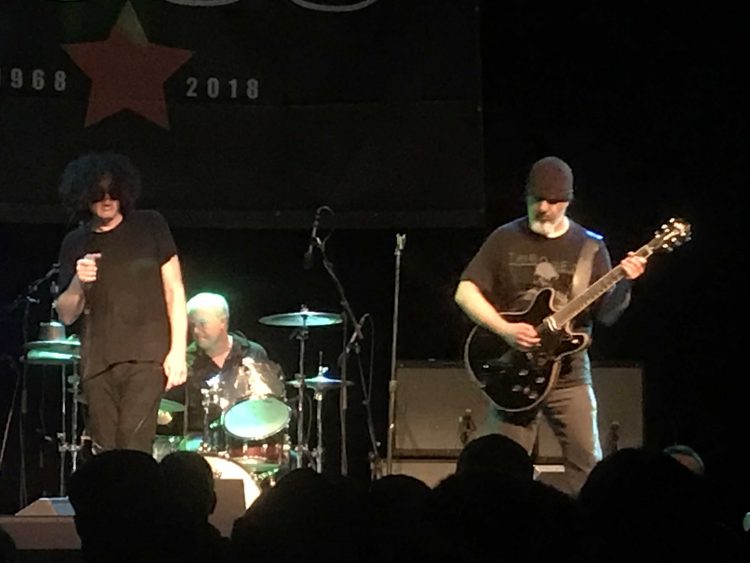 The primary reason MC5’s music matters, is not because they sold millions of albums, they didn’t, or because they were instant “pop stars,” they weren’t. In 1969, the biggest rock album releases were “Abbey Road” by The Beatles, The Who’s “Tommy” and, of course “Led Zeppelin II ,” along with debut’s by The Allman’s and Crosby, Stills & Nash. Only The Stooges, from Ann Arbor and led by Iggy Pop, and MC5 – perhaps there’s something in that Michigan air – were playing with the kind of aggression, energy and irreverent attitude that they came to be seen as the prototype for genres as far ranging as punk, garage, grunge and lots of hard rock and metal hybrids. And for those paying close attention, there’s even a bit of a tribute to Motown’s R&B and soul leanings thrown into the mix by MC5, that might get lost in the barrage of noisy guitars. But it’s in there, and can be heard in “Rocket Reducer No. 62,” and the call and response of the somewhat ominous refrain of “Rama Lama Fa Fa Fa,” which the crowd was slow to deliver to Durant and Kramer’s satisfaction, but finally got into the groove, perhaps inspired by the fiery guitar interactions again from Thayill and Kramer.
You can hear the band’s early punk leanings in “Borderline,” which leaned heavily on the punchy energy of the rhythm section, Gould and Canty, who were quite impressive throughout the band’s 60 minute set. “I Want You Right Now” was up next, an R&B rooted romp that proved as sexually provocative as the title suggests, which found Durant on his knees begging for connection and satisfaction. They finished up the “Kick Out The Jams” material with “Starship,” which included a long psychedelic middle section that was attributed to Sun Ra on the album original, and went to all the spacey places you’d want a late 60’s psychedelic rock song to go, including a strange penny whistle/saxophone sounding hybrid, played by vocalist Durant, who by the way, was not only a fitting vocalist to cover the parts of original singer Tyner, but he also wears his hear in a blown out white guy Afro that was reminiscent of Tyner’s. The fact that Durant is a tall 6 foot, 7 inches made him a total standout. 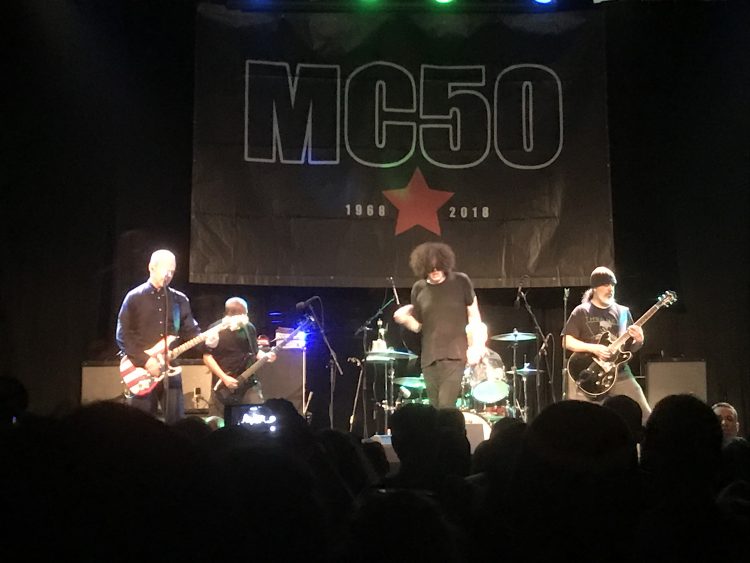 The rest of the set came from MC5’s second and third albums, “Back In the USA,” named for the Chuck Berry song the band covered, and “High Time,” released in ’70 and ’71, respectively. The delivered the high energy “Tonight,” followed by “Gotta Keep Movin’,” which included strong solos from both guitarists, again, and then took us back to “High School,” with an old school rock & roll feel. “Poison” followed, a song written by Smith who later married punk heroine Patty Smith, and whose nickname (“Sonic”) was later used in the name of the band Sonic Youth.
A surprise of the evening, and one of the strongest pop/rock melodies of the set, was a cover of the Theme song, “I can Only Give You Everything,” which was originally sung by Van Morrison, then they finished the set proper with an aggressive version of “Call Me Animal.” Kramer returned quickly for the encore, eager it seemed to keep playing, and the band played another Smith composition, “Sister Anne.”
Then Durant asked the crowd if we like “soul” music, implying the MC5’s Detroit R&B roots, before leading the band into “Let Me Try,” which included bluesy solos from both guitarists and Durant on harmonica. “Looking At You,” came next, a fun rocker marked by the fact that Durant removed the sunglasses that he’d worn for the entire evening up to that point. As they were about to say goodbye for the night, Kramer delivered one speech that mirrored the band’s history as political revolutionaries, which named the current occupant of the White House a “lunatic,” and remind the crowd that it’s not only our right, but our responsibility to “vote! Vote! Vote! Vote!” The band ended the encore’s with another fine rocker, “Black to Comm’,” a song that was around back in 1972 and was performed live, but didn’t make it to an album until the release of the band’s 1994 compilation album of the same name. 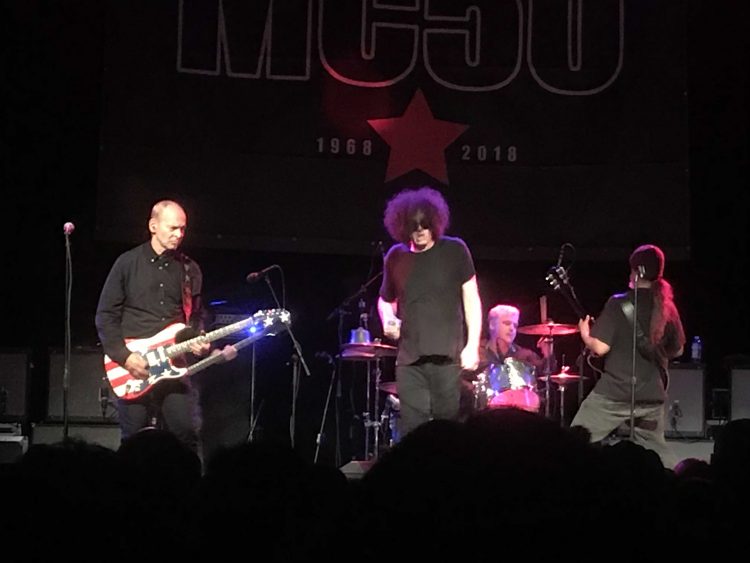 It’s hard to think of another band that recorded albums 50 years ago and then more or less disappeared, although Smith and Kramer and the others had solo careers that you’d really want to see try and recreate that original sound, energy and spirit. And come to think of it, pull it off as successfully as Kramer & Co. did at Bogart’s on Thursday night.
While you can hear, if you’re listening for it, the old school rock & roll influences in MC5, The Detroit Cobras who were special guests on 50th Anniversary tour, is all about doing garage band music that recovers that sound, since most of their albums are garage band covers of 50’s & 60’s pop, rock & roll, and R&B. On Thursday night, the two female mainstays, vocalist/front woman Rachel Nagy and guitarist and Joan Jett impersonator Mary Ramirez, were joined by a trio of males, a rhythm section and a guitarist who supplied the songs lead parts. But the 30 minute 10 song set rested mostly on the shoulders and sultry voice of Nagy, who brought a lazy, hazy attitude to the proceedings. Standouts included “Leave My Kitten Alone,” “Putty (In Your Hands),” “Cha Cha Twist,” and set closer “I Wanna Holler (But the Town’s Too Small),” which ended with Nagy leaving the stage while the rest played on, followed by Ramirez, and then each of the others.
Cincinnati’s Lift the Medium opened the show, playing a mix of pop/metal originals that proved to by glossy high production efforts that were clearly over rehearsed down to the lead singer’s long hair being whipped to and fro and the second vocalist’s screams and the two leads paint by numbers guitar solos. Two thoughts: If your bass player plays a 7 string instrument and insists on holding like it’s a rifle, you might look a tad pretentious. And if you’re aiming for marketing yourselves to the Top of the Pops, maybe you should avoid putting the word “medium” right there in your name. It was suggested by my companion that they would have probably been a better fit opening the show for Jackyl, that’s coming in a few weeks, and in that context I have no doubt they would have been a hit.
-Reviewed by Brian Q. Newcomb