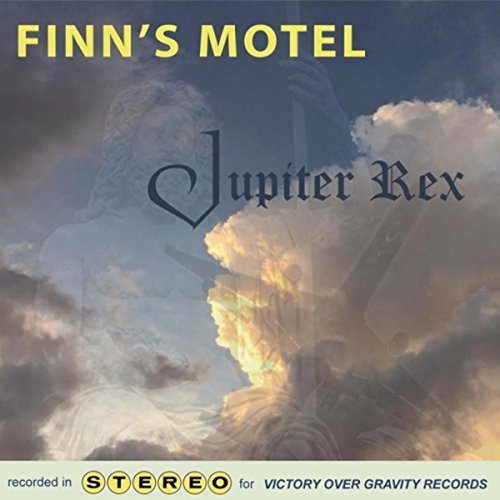 Fire Note Says: Jupiter Rex. Thebeau has found his own voice, still connecting with those great early 80s influences, but not stuck there.
Album Review: When you’ve been writing and recording music in relative obscurity for close to 30 years, as has Joe Thebeau, you reach a point where you stop worrying about what’s hot and what’s not, quit worrying about which influence matters most to you, and you just start making music that pleases yourself and your friends and the fans that remember the bar band days of your youth. St. Louis’ Thebeau made his last recording with Finn’s Motel, Escape Velocity, back in 2006 for Scat Records, one time home of Guided By Voices. And Thebeau has obviously absorbed a bit of GBV’s brand of brash power pop, as witnessed in “Drinking Wine at Beer Speed” on the band’s latest album, Jupiter Rex.
The album starts with the fast, punky rocker, “Grounded,” with fun, stutter stop rhythm breaks that hint at early Cheap Trick, and is followed “Jacket (Hangin’ Around), which begins with the same lyric as the previous song: “I was reading you poetry/You were waiting on the punch line.” The kind of fun challenge a smart songwriter might take on, to see if you could take a similar opening lyric into two completely different but complimentary songs. You hear a similar self-referential word play in “Number 7 By the Ice Machine,” which is of course, in the Finn’s Motel. Thebeau, who sings lead and play guitar, is joined by long time band mates Steve Scariano on bass, and Patrick Hawley on drums, with help from Matt Meyer on guitars, the occasional violin and other assorted instruments.
But just because most of the opening tracks lean toward bold rock & roll, with crunchy bass lines and power-pop melodies, don’t think that’s the whole ride. “Awake, Alive, Alone” is a singer-songwriter folk song played on acoustic guitar with only some piano accompaniment. “Into the Realm of Jupiter Rex,” is a pure pop reflection on the early years of intercontinental flight and the old Greek gods, a theme which flows through a few more acoustic leaning songs that occasionally bring R.E.M.’s quieter works to mind. “Wings Are Not Made of Angels,” “Icing the Equator” and “Lateral Drift” are similarly reflective, with a strong melodic presence over the finger-picking acoustics. “It’s A Sign of Weakness” starts out similarly, but builds toward a sturdy pop rock crescendo.
“Down With the Ship” moves from flight to the seas and a return to rock, while the closing songs offer philosophical reflections on the changing seasons (“Early Spring”) and the journey of life (“Behind These Mountains There Are More Mountains”). Lyrically, there’s a poetic eloquence present in the explorations of boundaries, both physical and relational, which matches a level of musical maturity evident throughout the diverse approaches that make up Jupiter Rex. Thebeau has found his own voice, still connecting with those great early 80s influences, but not stuck there.
Key Tracks: “Grounded” / “Jacket (Hangin’ Around)” / “It’s A Sign of Weakness”
Artists With Similar Fire: Replacements / Guided By Voices / R.E.M.