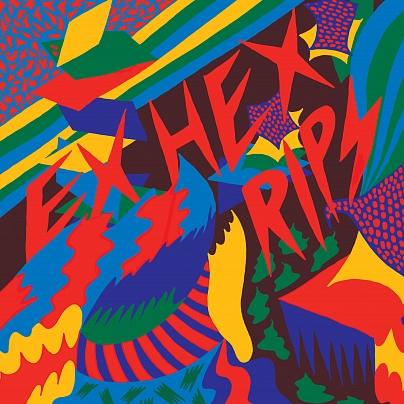 Fire Note Says: Ex Hex debut backs up its album title!
Album Review: Ex Hex has quickly become one of the best female power trios on the music scene today. The band is lead by Mary Timony, which through the mid 90′s she fronted the Matador Records band Helium, was in a collaboration with Sleater-Kinney/Portlandia’s Carrie Brownstein called The Spells, released a handful of solid solo records and most recently was in Wild Flag which once again paired up with Brownstein but also included Janet Weiss (Sleater-Kinney, Quasi) and Rebecca Cole (The Minders). Ex Hex brings a new pair into Timony’s fold with drummer Laura Harris (The Aquarium, Benjy Ferree) and bassist Betsy Wright for their excellent debut Rips.
Ex Hex brings back a classic sound of rock n roll that kindles the spirits of Ramones, Joan Jett’s Runaways and even a little Cheap Trick. It is a fun never slow down type of record that finds album-opener and single “Don’t Wanna Lose” not only setting the tone but becoming the template for Rips with its muscular guitar, harmony chorus and plenty of crisp musical turns. What helps Rips work is that Timony’s vocals gleam on every song, even when the supporting duel vocals chime into the mix. Her confidence is isolated and infectious with the drums hitting hard and with the bass riffs strong enough to carry everyone on their back. What I also like on Rips, is that Ex Hex are not afraid to add in plenty of “whoa–ohhs” and “yeah yeah yeahs” which never come off cutesy but absolutely essential. Another thing Ex Hex have going for them is their ability to flip the switch on a dime like on “You Fell Apart” the song switches from an in your face type of verse to everyone chiming in as Timony sings “That your just a creep that I regret, And I tried so hard not to forget, I got no regrets, I got no regrets.” You bet there are no regrets when on other songs like “New Kid,” Ex Hex ooze attitude as its speedy guitar slices this song up and takes a front seat as the vocals are a bit muffled and forced out as the chorus chants “you’re a warrior, a warrior, a warrior.” 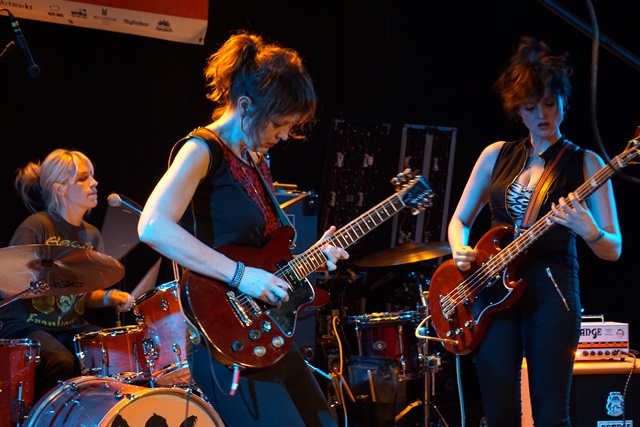 Rips twelve songs deliver a lesson on what it takes to be a good rock album. Timony shows off her veteran status musically but you won’t hear her early history in these songs as Ex Hex is entirely fresh. Rips is an album that was created out of good times and is better because of it. The chemistry between these three women is electric and it not only makes Rips stronger with every replay but also a whole lot of fun!
Key Tracks: “Don’t Wanna Lose” / “You Fell Apart” / “New Kid”
Artists With Similar Fire: The Runaways / Wild Flag / Ramones