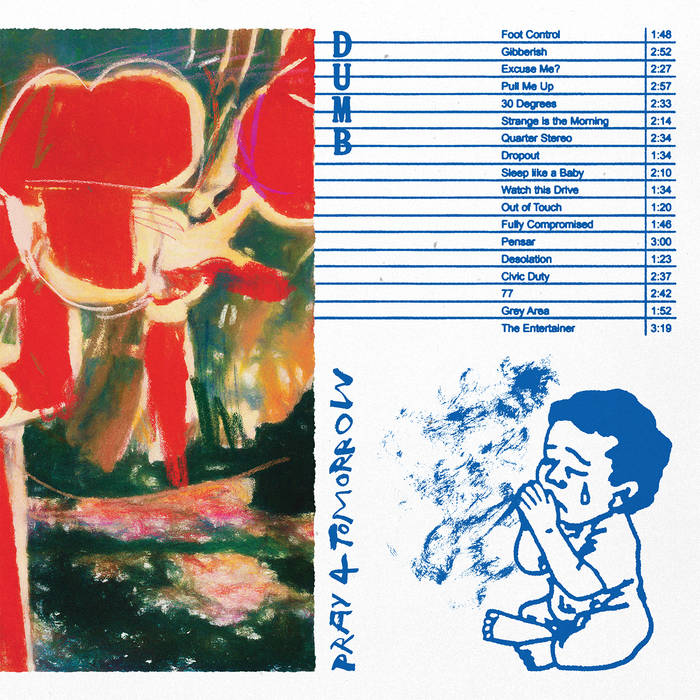 I really like it when you can hear progression with a band, but the overall group sound doesn’t drastically change. That is the case with Vancouver’s Dumb on their third full length, Pray 4 Tomorrow. The band has already produced two solid indie post-punk albums as Pray 4 Tomorrow carries everything that was great about their previous efforts forward. Dumb’s frenzied yet focused slacker rock is in full effect today with fast-paced songs and plenty of quick rhythm shifts.

What is new here is what really pushes Dumb to the next level. Pray 4 Tomorrow has even tighter song structures with laser focus and a maturity in both songwriting and musicianship. Before, singer Franco Rossino went in different directions lyrically within a track without much thought. On Pray 4 Tomorrow you get lines like on “Pull Me Up” where Rossino delivers “I’ve been having nightmares where the feds are at my door. You’re inciting insurrection like we’ve never seen before. Yeah, I’ve gone through proper process, civil discourse isn’t helping. And if I’m being honest, yeah I think it’s disrespecting.” Or, on one of my favorite tracks, “Sleep Like A Baby” when he sings, “My friends are tired of listening to me whine and complain. But I wake up every Monday, joke’s on me again.” This type of targeted subject matter really works to Dumb’s advantage.

The lyrics are great, but the music is why you will keep coming back to this record. There are 18 tracks which gives the band plenty of creative room as you will find several ska Specials like vibes, a couple of folk tunes with vocals from bassist Shelby Vredik, and a series of stylistic rants that sounds like the band has been playing some classic DC hardcore. Pray 4 Tomorrow can be both noisy and melodic and both at the same time. It is an album that is smart and engaging as its content almost mocks the band’s name. Dumb is anything but!

KEY TRACKS
“Pull Me Up” / “Sleep Like A Baby” / “Fully Compromised”

Rhett Miller – “Go Through You” [Video]