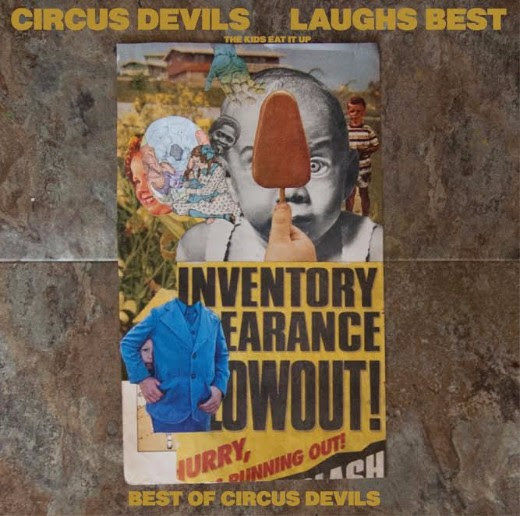 Fire Note Says: Circus Devils are sent off in fine fashion with this career-spanning double-LP compilation
Album Review: Circus Devils has never been for the casual Robert Pollard fan. The “band,” comprising Pollard and brothers Todd and Tim Tobias, is as unpredictable as they are downright weird: what you find on one album is no indication of how the next will sound—or any in their fourteen-album discography, for that matter. The band has explored crunchy heavy metal rock operas, spaghetti western-inspired song cycles, studio experimentation, progressive rock excursions, moody ambient soundscapes, and straight-up power pop (albeit with bizarre, surrealist lyrics). So how does one begin to put together a “greatest hits” for a band that purposefully steers clear of commercial considerations?
While such a problem might stump even the most rabid Circus Devils fan, Pollard’s sequencing talent is the key. Not only do albums from his other projects like Motivational Jumpsuit, From A Compound Eye, and Let It Beard demonstrate his knack for ordering tracks in a way that is both satisfying and revealing, his other compilations—both official and unofficial, of his own and others’ material—are often definitive, even when they avoid obvious choices. The same is true of Laughs Best: Pollard often cherry-picks one or two obscure tracks from fan-favorite albums, resurrecting gems like “Locomotion Blue Note” (My Mind Has Seen The White Trick) and “Correcto” (Ringworm Interiors) and surrounding them with complementary tracks that bring them into sharper focus. Another surprising aspect of the track selection is its apparent imbalance: rather than taking two or three tracks from every album, some albums are (surprisingly) underrepresented with a single track (debut Ringworm Interiors, fan-favorite The Harold Pig Memorial, Five, Mother Skinny, and simultaneous releases When Machines Attack and My Mind Has Seen The White Trick). Others have as many as four or five, which makes sense for double-album Sgt. Disco, but less so for Ataxia and outlier Gringo. At three tracks, the new (and final) Circus Devils album Laughs Last gets more representation than most of the band’s other records.
Such an imbalance might not seem to work on paper, but once you throw the album(s) on your turntable, you don’t even notice—Laughs Best isn’t all of the best Circus Devils music, but it’s a fantastic and fascinating cross-section. Its thirty tracks make clear how well Pollard’s vocal and lyrical abilities fit the Tobias brothers’ musical sensibilities, and its sixteen-year span (which rivals the initial run of GBV) makes a good argument for the band’s importance in Pollard’s overall body of work. Long-time fans will appreciate some of the left-field song choices and expert sequencing, but as all good compilations should be it’s also a great entry point into the intimidating Circus Devils catalogue. While we wish there were more albums on the way, Laughs Best is a fine way to say goodbye. Circus Devils is real! Long live Circus Devils!
Key Tracks: All of them.
Artists With Similar Fire: None.
Circus Devils Website
Happy Jack Rock Records
-Reviewed by Simon Workman