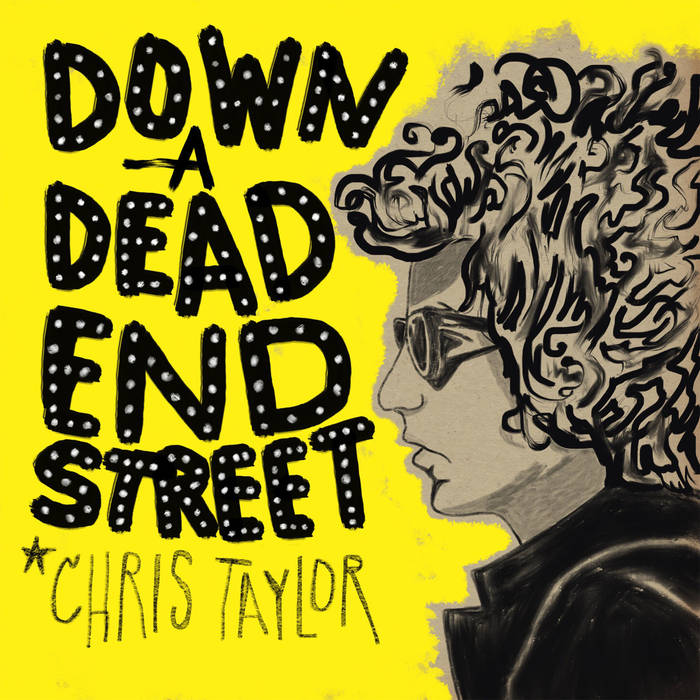 Fire Note Says: San Antonio singer/songwriter with a half dozen albums of original LPs under his belt, offers up a tribute to Bob Dylan.
Album Review: These days, San Antonio singer/songwriter and painter, Chris Taylor can be heard regularly around his hometown playing The Cove and other places where original music is till appreciated. Plus, he has over two-dozen releases available on his Bandcamp page, including records he made back in the mid 90’s with the band Love Coma. (Trivia note: Another member of that band, Matt Slocum went on to form the band Sixpence None the Richer with vocalist Leigh Nash, and produced that global megahit, “Kiss Me.”) While I can’t speak for many of those, his 2013 release, Travelers Hotel, made my “best of year” list, for his smart songwriting and lovely, smooth-as-silk singing voice, and I regularly revisit his 2014 album, Daylight, that I picked up when he played Columbus on a rare tour north, accompanying two of his musical heroes, the duo in Kerosene Halo.
But this time out, Taylor has chosen to pay tribute to one of the more important songwriters, and musical influences of our lifetime, Bob Dylan. Now most Dylan fans have their own list of his best/most important songs, so I can’t imagine someone making a Dylan tribute album that didn’t include “Tangled Up In Blue,” “Every Grain of Sand,” or “Forever Young,” but obviously nobody wants to hear me sing, as it might provide the one occasion in recent years when someone said they would prefer to hear Dylan’s own ragged voice, which has not weathered these years of endless touring as successfully as his songwriting. So, on Down A Dead End Street, we hear Taylor’s pick of 9 songs from the massive catalog of Dylan, and benefit from his sweet vocal interpretations of these memorable works.
The two opening tracks are among the strongest representations herein, “What Was It You Wanted,” from the 1989 album Oh Mercy, and “Things Have Changed,” which didn’t show up on a Dylan album before being added to the soundtrack of the movie “Wonder Boys,” which won him the Academy Award for best original song for 2000. Taylor’s intention is not to reinvent these finely written works, but to serve the song’s original poetry and melody in a respectful and meaningful way. While much of the record benefits from Taylor’s reverential nods to Dylan’s craft, it’s his own articulation supported by the spellbinding effect of Mitchell Connell’s lead guitars. “Man of Peace,” from ‘83’s Infidels, picks up the pace, and is the one song here that benefits from the presence of a live drummer, Anthony Gravely, while bassist Jeff Elbel adds his tones to the drum machine sounds that sustain the rest of the album.
There’s two from Dylan’s controversial “Christian” period, which has just been memorialized with the recent release of Trouble No More – The Bootleg Series vol. 13/1979-1081. Taylor covers “Gotta Serve Somebody,” the airplay single from Slow Train Coming, and closes out the record with the less well-known, “Pressing On,” from Saved, both which benefit from the presence of a Gospel choir. But the remaining four selections speak to the breadth and depth of Dylan’s catalog, “Simple Twist of Fate,” “Ballad of Hollis Brown,” “Blind Willie McTell,” and “Man In the Long Black Coat,” and Taylor serves them up as if he’s the first one who discovered them, a benefit to a generation that perhaps has refused to taste the fruits of this genius.
My suspicion is that Dylan fans who visit these recordings out of curiosity, will be intrigued enough to seek out Chris Taylor’s original songs, and from my experience it will be quite worth the effort.
Key Tracks: “What Was It You Wanted” / “Thing Have Changed” / “Blind Willie McTell”
Artists With Similar Fire: Bob Dylan / Kerosene Halo / Peter Case