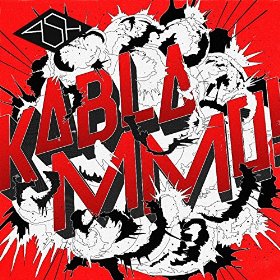 Fire Note Says: Irish rockers make a big return with their first new album in 8 years.
Album Review: Be honest, how long has it been since you thought about Ash? It’s been quite some time for me as well, but when you think back, wow they had a really nice run from their first album, Trailer, to Free All Angels, they were simply untouchable. No one made punk as fun and catchy as this band. As they got older, they became more of a punk edged pop band on Nu-Clear Sounds and Free All Angels, but they still did it better than anyone else. They had big loud guitars, huge pop hooks and a keen ear for melody that separated them from the pack. Now they are back with their first album in 8 or so years, Kablammo!. If you’re like me, you’re probably wondering, now that the band is middle aged, they’ve probably mellowed out, and you’d be right a little bit. They have definitely expanded their sound to include some quieter touches, but this album’s title Kablammo!, really says it all. They have exploded back with a record that no one really expected and everyone should be grateful for that!

“Cocoon” sounds like it was shot out of a cannon straight into your eardrums. This is everything Ash ever did well all in one song. Loud, catchy, and in your face with its big guitars yet sweet vocals, this is the good stuff right here, the kind of song that grabs your attention, and makes you excited to hear what comes next. Quite simply, this is about as stunning an album opener as you are likely to hear this year. It doesn’t stop there though, because Ash doesn’t take their foot off the gas for the next few songs. It isn’t until we get to the 4th song, “Free” where things slow down, but fear not, this is no decline. “Free” starts slow and gradually builds to its gorgeous chorus. How in the world are they still able to do this and make it sound so effortless? “Moondust” is a fantastic piano based song that swells into a full blown rock and string section opus, this one should be a hit, though somehow I don’t it will, and that’s a damn shame, because it’s hauntingly beautiful. “Bring Back the Summer” is the perfect song to close the album. Think of this song as not only a fitting closer to the album, but its Beach Boys influenced melody also make it the perfect song to mark the end of summer 2015.
Kablammo! is front loaded with rockers before revealing its more mature sound on the second half of the record. There are still plenty of upbeat tracks on the second half, but the energy dropped just a bit for me. Overall though, this is a fantastic album, and a pleasant surprise that really came from out of nowhere, I never expected Ash to make a record this good in 2015. You should definitely check it out.