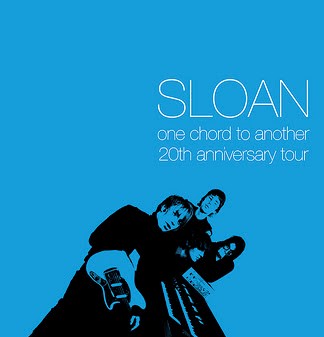 Sloan fans will rejoice that the group is heading out for several One Chord To Another 20th Anniversary Dates. The shows will have two full sets – one set of their 1996 Juno Award winning “One Chord To Another” album in its entirety and another set of hits.
Right now the band is hitting mostly Canada but several US dates are at the end. Hopefully Sloan will extend the tour to cover more of the US over summer. Also you will find an update below on the One Chord To Another Vinyl box set which is sure to be a must have for all Sloan fans!
APR 5th – Barrie, ON – Roxy Theatre
APR 6th – Sudbury, ON – Townehouse
APR 7th – Thunder Bay, ON – Crock’s
APR 8th – St. Paul, MN – Turf Club
APR 9th – Winnipeg, MB – The Pyramid
APR 10th – Saskatoon, SK – Broadway Theatre
APR 11th – Lethbridge, AB – Average Joe’s
APR 13th – Grande Prairie, AB – Better Than Fred’s
APR 14th – Red Deer, AB – Bo’s Bar and Grill
APR 15th – Edmonton, AB – The Needle Vinyl Tavern
APR 16th – Calgary, AB – The Marquee
APR 18th – Nelson, BC – Spirit Bar
APR 19th – Penticton, BC – The Mule
APR 20th – Vancouver, BC – Imperial Theatre
APR 21st – Victoria, BC – Sugar
APR 22nd – Nanaimo, BC – The Queens
APR 23rd – Seattle, WA – TBA
APR 24th – Portland, OR – Doug Fir
APR 26th – San Francisco, CA – Rickshaw Stop
OCTA Deluxe 20th Anniversary Reissue Box Set Update from Jay below.
“Finally, there is a light at the end of the tunnel! Only about 400 metres to go! (Booo. I know. I couldn’t resist.) We’ve been working on this for over a year, but at last we are putting the final touches on the One Chord To Another deluxe vinyl box set that will accompany the 2016 tour. The records are pressed, the book is being printed and Chris is delighted about not having to scan anymore photo negatives. Once again, as with the sold out Twice Removed box set from 2012, there will be 3 LPs, a 7” single and other cool elements. We’ll be sending another email update soon with all the details and how to pre-order the set. Anyone who’s anyone should have it in their collection! (Boooooo. I know…I KNOW!) We hope you’ll dig it.”